Welcome to the Protection Warrior Tank guide for World of Warcraft Wrath of the Lich King 3.3.5a. In this guide, you will learn about playing a Protection Warrior in a raid. The guide includes Talents, Glyphs, Gems, Enchantments, Add-ons, Gameplay & Skill rotation tips.

These are the core talents for a Protection Warrior. Keep in mind, there are 12 points left for you to decide where to put them, depending on your needs. 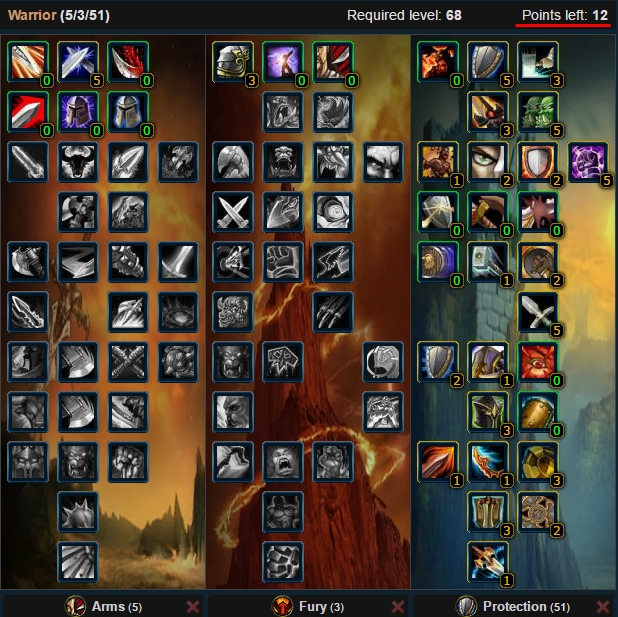 This build is optimal for doing a 5-man dungeon. Maximizing the efficiency of your shouts and reducing some cooldowns on your defensive abilities. 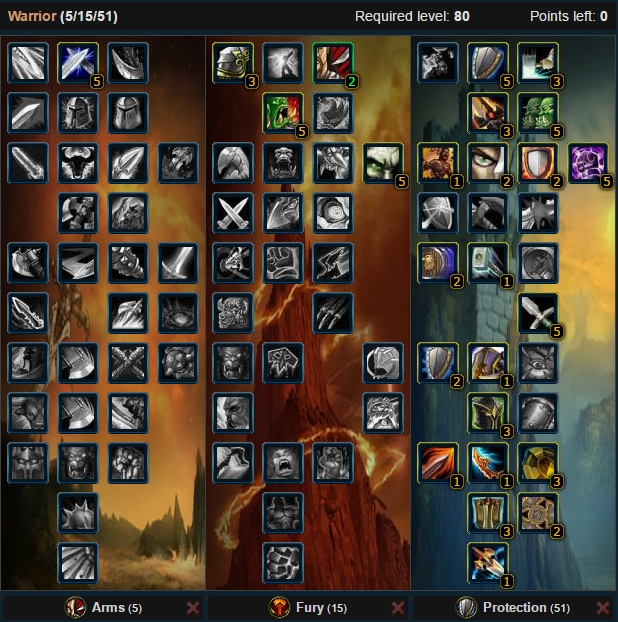 The last build is for a full raid. This build improves your personal damage and therefore threat-generation. Lack of improved shouts is planned to be compensated with another Warrior, who spent points in those talents. This build has lower cooldowns on your defensive abilities, as well as improved shield slam. Shield slam is a high treat-generating skill, so use it. 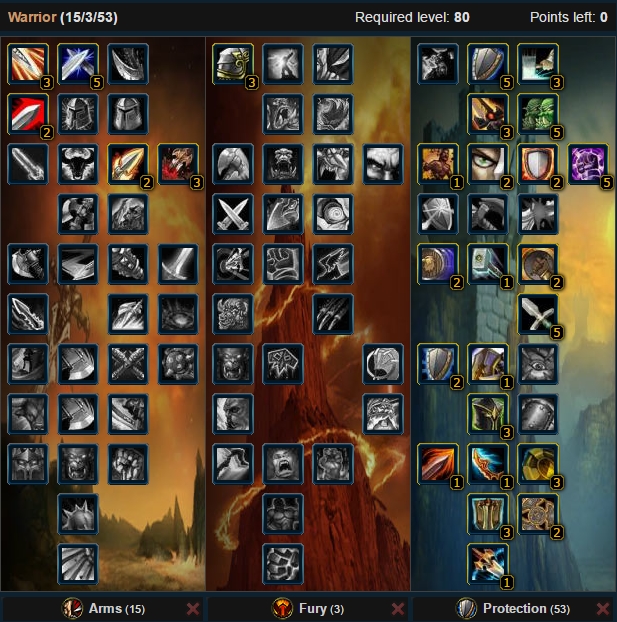 Warrior has a lot of useful Glyphs to choose from. We’ll start with the raid-survivability ones, which are useful in higher difficulty content.

If you’re starting with dungeons, then there’s likely no need for the cooldown reductions from Glyph of Last Stand and Shield Wall. Combine the Glyph of Taunt with the following:

Don’t forget to turn the boss around, your raid has to hit him from the back. Exceptions – Dragons. They are hit from the side because they can hit with the tail.

Once you are in melee use Shield Block and start using Shield Slam as it gives you lots of agro. Don’t forget to use Revenge.

Note, that sometimes other Warriors will do it for you.

In a perfect situation, every white attack should be replaced with a Heroic Strike

Shockwave is used in emergency situations, when a lot of monsters appear, or if aggro is lost.

Defense rating soft cap is 540, which makes you uncrittable. After that, the stat only continues to increase Parry, Dodge & Block which is also useful, but is not as crucial as the initial cap.

Stamina and Armor are listed together because these two stats form the Effective Health (or EHP), which equals to the amount of damage you can take before dying. It is necessary to have a balance of both stats to maximize your EHP. Increased EHP gives more time for your healers to react to incoming damage.

Example: 30K Health pool, and a 50% damage reduction from Armor equals 60k EHP. Which means that you will be able to take 60K of physical damage before dying, even though your total Health is 30k.

Note: Tooltip % for Armor reduction is calculated against a lvl 80. Against a lvl 83 boss, use the following formula:

We require 8% of Hit (or 263 rating) to always hit with our abilities. However, to always land a Taunt in a raid, we will require 17% Spell Hit because Taunt is a spell. Combining 9% of Spell Hit (or 237 rating) and a Glyph of Taunt will provide you the needed result. Target debuffs like Misery and Improved Faerie Fire will reduce the requirement by another 3%. Consider Taunt a priority. After that, you can work up to 8% of Melee Hit.

Dodge, Parry, and Block are at the end of the list because the Defense stat covers them. Dodge and Parry are full avoidance stats, with Dodge being the more effective one most of the time. Block only partially reduces incoming damage from an attack.

These builds are incorrect for the content they are meant to be for.

THIS IS FOR TIER 10 CONTENT (ICECROWN CITADEL AND RUBY SANCTUM)

For 5 man dungeon’s it is best to run this build for aggro and doing the most damage possible
https://wotlkdb.com/?talent#LAM00fZhZVItrx0didczsGo:MdToMm
These will make you keep aggro in aoe much better and make your time in a dungeon go so much smoother while also making sure you are more safe with shield wall glyph.

For a off tank position in a raid (not adds in ruby sanctum) you would go this
https://wotlkdb.com/?talent#LVZGV0oLZVItrx0didczsho:riToMm
This will provide more support while pumping your surviviability by a lot more with the glyphs. Commanding presence + improved demo shout will make you have more hp with commanding and take less damage while demo shout is active. Piercing howl will let you slow adds and slow valks on lich king (very important to not let people die)

For a main tank position in a raid, you would do this
https://wotlkdb.com/?talent#LVMc0fZhbZVItrx0didczsho:riToMm
The reason you grab deep wounds instead of commanding presence is because as a warrior your aggro isnt that good. So deep wounds will provide more aggro generation that should help you keep aggro off the big boy dps in your raid. we do NOT take damage shield for one main reason, its really bad in icc tier for the damage it does. It’ll do 400ish per block/hit which barely keeps up with 2% crit when you have deep wounds. If you are in earlier tiers like Tier 9 it would be way better.

If you were wanting to tank adds in ruby sanctum you would also choose the 5 man build (replace shield wall glyph with shockwave) and wear dps gear to do as much damage as possible, ive done 2.3m damage to embers myself in an average rs run.

For cooldowns you have a wide array of them and understanding each one is important
Shield block: 40 second cooldown, small cooldown. Increases block value and block chance by 100%
Always use this on pull to keep yourself from dying instantly and let healers set up
Shield Wall: 2 min cooldown (4 min without glyph), major cooldown. Gives a 40/60% damage reduction.
Use this before big damage comes in to reduce it as much as possible
Last Stand: 2 min cool down (3 min without glyph), major cooldown. Gives 30% bonus health
Use this if you are about to take big damage or if you are about to die, it can be a life saver
Bloodrage: 1 min cooldown (only with 4 set tier 10), minor cooldown. gives 20% of health as an absorb shield
This is best used before a big hit (like breath or soul reaper) along with last stand to increase the amount it absorbs

For gemming/enchanting, this is what you wanna do (or what I personally do myself)
Gemming: All +30 stam gems with one +10 exp + 15 purple gem in the biggest stam socket bonus (like head) for meta gem. Meta gem should be +stam and 2% armor value

This is the first time im actually compiling information to help fledgling prot wars so if you want more personal questioning as Ill never check this website really, dm me on discord at: Dova#8659

I am NOT the best prot war, im just a guy who loves prot war and wants to make sure the right information is out there and to fill in the gaps where this guide doesn’t. Enjoy the read and message me if you want answers.

The defense cap for raids is 540 or 536 with pvp shoulder enchant.
Resilience reduces crit chance by 0.04% for every 4 resilience you have and it works in pve.

Stamina is our stat of choice to stack obviously, I sit at a comfortable 80k health in icecrown with 30% buff active (30% more max health)

Bonus armor is a good stat to go for on your gear if avaliable in that slot. If you don’t know, bonus armor is when the armor number is in green or if its on jewellery like weapon, neck, and rings. Armor will reduce physical damage you take so it’s good to stack it to survive one more hit if possible.

5% melee hit is our sweet spot for taunt as it converts to enough spell hit with taunt glyph + 3% hit chance debuff to always land the taunt.

Dodge is the better avoidance stat than parry due to its slower diminishing returns. So id put block based stats, parry, and defense all together. If you wanna know what item is better based on avoidance, compare how much avoidance each item gives you.

Now for expertise its kinda iffy, you need some yes, but not 26. My warrior sits at 18 (22 with food) and is generally fine and can keep aggro and hit my stuns on shamblings/adds easily. Don’t sacrifice armor or stamima for expertise!

Why Tactical Mastery in your main tank skill. When I change stances?

Btw thanks for your great guide

Yes Tactical mastery is a must have if you are going down the arms tree as it will give you 25 rage when you transition into battle stance, which is enough to do shattering throw. I will however recommend changing improved charge to improved Rend, as Rend will provide more TPS above 75% than a rend. (Cant edit original comment so ill put it here)

Hi mate i was wondering why dont you have expertise and hit capped ?

I barely check here but this is the answer

Threat stats aren’t very relevant in WOTLK due to ToT + MD carrying your threat by a huge margin that makes you be able to focus more on stam and bonus armor items like Pillars of Might. The most hit you rly need is enough to cap taunt (17% spell hit including glyph.)

First tnx for guide,is realy good, second can you add your tank gear in armory or sc.