Welcome to the Arms Warrior DPS guide for World of Warcraft Wrath of the Lich King 3.3.5a. In this guide, you will learn about playing an Arms Warrior in a raid. The guide includes Talents, Glyphs, Gems, Enchantments, Add-ons, Gameplay & Skill rotation tips.

Don’t forget to change Sword/Mace/Poleaxe Specialization according to your weapon!

The first build is for people new to raiding. No top gear or stat caps. Here we have a focus on rage generation with talents like Unbridled Wrath and Anger Management. Also, we take Weapon Mastery due to lack of Hit Rating and Expertise. Slam is excluded from our rotation, which makes us more mobile, but do less damage. 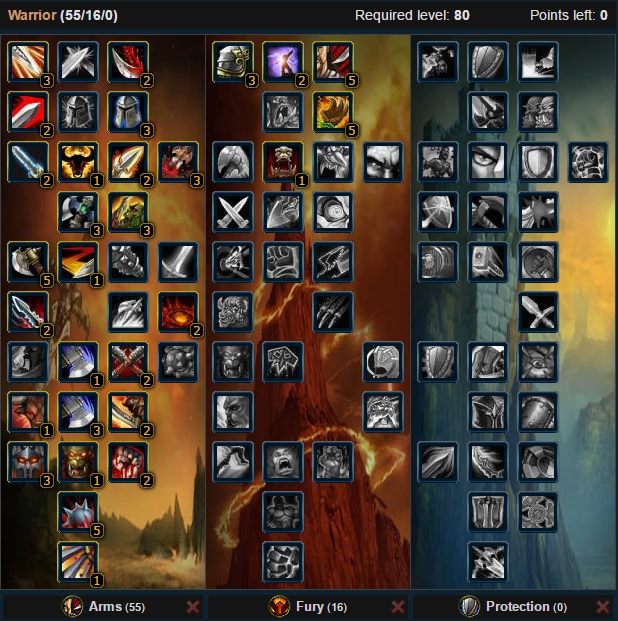 The second build is for people with stats capped. This build is considered the best DPS in 1 target. 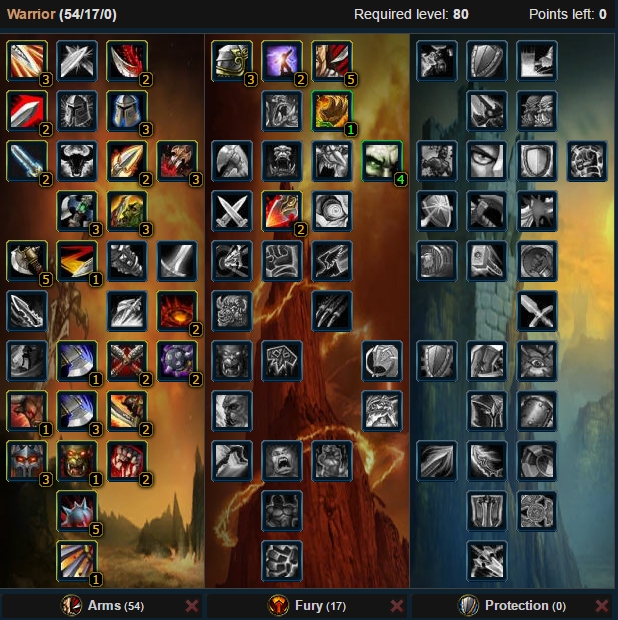 Arms don’t have that much of a Rotation. Their gameplay is based on skill procs.

The Hit requirement is 8% (or 263 rating) to always hit the target. Expertise rating soft-cap is 26, which removes the chance of your attacks to be dodged & parried. At the same time, lower levels of expertise provide more opportunities to use Overpower. Some theorycrafters recommend staying at around 20 expertise to use more Overpower.

Armor Penetration is the primary stat of Arms spec and therefore is a priority. The downside that a new player might experience is that it’s not as effective in the beginning when you haven’t got enough of it (around 50%). The hard cap for Armor Penetration is 100%. To reach it, use gear, gems, trinket procs. Additionally, we have Battle Stance, 2p T9 set bonus, and Mace Specialization.

1400 ArP equals 100%, and it’s usually the cap for melee classes.
1260 is the hard cap for Arms Warrior because we use Battle Stance
1050 if we’re using Battle Stance with a Mace + Mace Specialization talent
966 if we add the 2-piece T9 set bonus to all of the above-mentioned
(Note that while Mace can be useful during the transition to ArP, you’ll want to switch to Axe + Poleaxe Specialization for better DPS in the long run)

Strength is the core stat for Warriors, which increases the Attack Power and effectiveness of the abilities. In the beginning, new players will find gemming for Strength (while gathering ArP gear) to be more efficient. After getting around 50% of ArP, you can make the transition to ArP and focus on it entirely.

Critical Strike Rating has a significant impact on your DPS. We have talents such as Impale, Deep Wounds, Trauma, and Wrecking Crew, the effectiveness of which depend on frequent crits. Stack crit as much as possible. Start by reaching 30-35% by the time you start raiding and build up from there. 60% is an achievable amount of crit if you’re closing on to BiS gear. It’s not unusual to see Warriors adding Agility items such as Vereesa’s dexterity, Ashen Band of endless vengeance, or FrostBrood Sapphire Ring to increase the crit chance.

I’m interested in making an arms warrior on the server I play on. Just one question: do arms warriors stance dance at all in WotLK? Just wondering, thanks 🙂

Short answer: No.
Long answer: There’s not a really good reason to stance dance in PVE, as you’ll lose pretty much all of your rage (and therefore drop your dps). “Recklessness” may be worth using, but you can do that right at the start (5 min cd, so you wont use it twice in most fights).

Ok cool just wanted to confirm. I know they aren’t that great in dps in Wrath PvE but man they are fun to play imo lol

i dont think you’ve seen any good arms warriors. up until around icc they are top tier

I think the blue gem section has an error. What should be instead of the ruby?

it is correct, you do not use a blue or purple gem, you use the 10+ stats thing to trigger your meta requirements and then gem full red

is possible replace Wrecking Crew for Enrage? and use Death Wish instead Bladestorm?