Welcome to the Arcane Mage PVP guide for World of Warcraft Wrath of the Lich King 3.3.5a. In this guide, you will learn about playing an Arcane Mage in the arena or a battleground. The guide includes Talents, Glyphs, Gems, Enchantments, Add-ons, Gameplay & Skill rotation tips, Team setups. 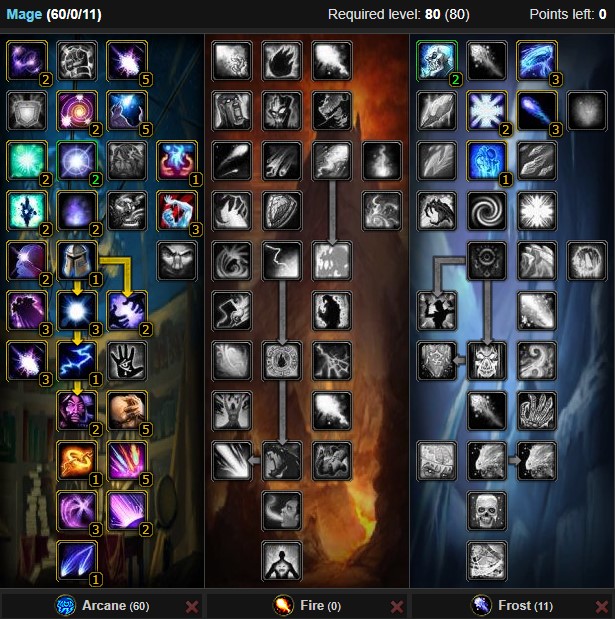 Covering buffs and debuffs is a useful tactic. Use Slow Fall to cover your buffs from classes who are trying to dispell/purge. Also, you can cover a Polymorph on the enemy with a debuff to make it harder to get rid of it. Polymorph can be used to heal yourself when casting against a Warrior with spell reflect.

Positioning yourself near pillars will help you to survive due to loss of sight. Fake casting may be good to lure out some CC, but a skilled opponent won’t buy it, so be careful with it. If they block your school of magic – use instant spells from another one. Ice Block can be used to get rid of CC, but be sure to pay attention and timely cancel it to receive a heal.

Use Fire ward right before being hit by a fire spell to reduce the chance of it getting dispelled.

Everyone recommends glyphs of fire ward or frost ward but does it actually works?