Welcome to the Feral Druid Tank guide for World of Warcraft Wrath of the Lich King 3.3.5a. In this guide, you will learn about playing a Feral Druid (Bear) in a raid. The guide includes Talents, Glyphs, Gems, Enchantments, Add-ons, Gameplay & Skill rotation tips.

The first build is for players with lower gear levels. You might want to tweak the build a bit for some occasions. Choose between Brutal Impact and Feral Instinct for either stun or additional AoE damage. Infected Wounds are not needed if a Death Knight is in your party. 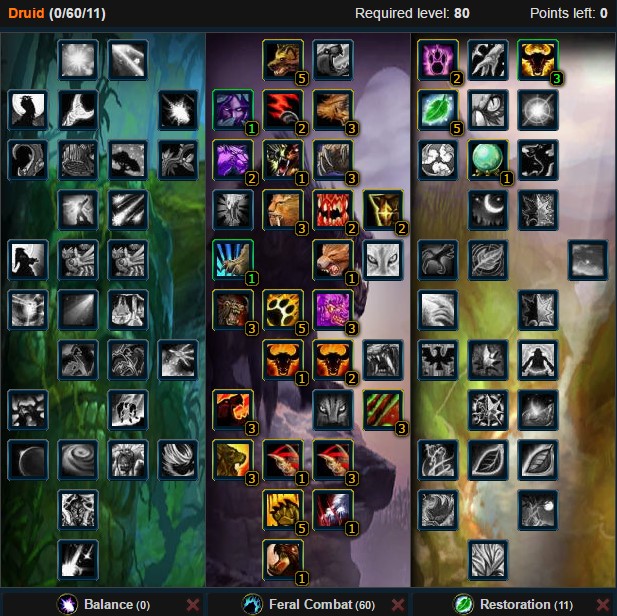 The second build is for players with 4 T10 bonus. 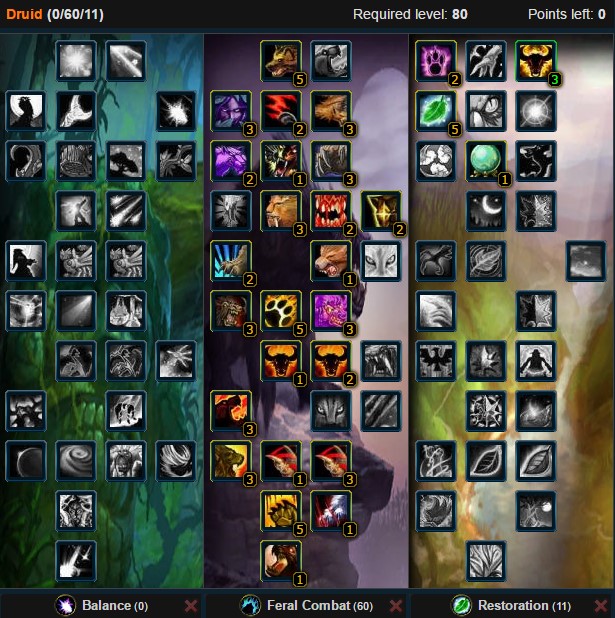 Other options (for early-stages):

Feral Druids have a little problem holding aggro at the pull. Use Faerie Fire right before you pull, it generates extra aggro. Use Mangle on cooldown and keep up 5 stacks of Lacerate. Use Berserk at the start and spam Mangle and Maul on cooldown to generate aggro.

Stamina is the main stat for a Feral Tank, stack as much as you can. Next, we have Agility which gives us Critical strike chance, Dodge and Armor. When choosing gear, prioritize Agility over Strength as it is a much more valuable stat for us. Armor is also an important stat for a tank, as it reduces the incoming damage. Keep a lookout for items that provide additional armor (rings, trinkets, amulets, and cloaks).

Expertise reduces the chance of your attacks being parried or dodged. 26 Expertise (213 rating) is the soft cap after which the boss won’t dodge you, but will be able to parry with a 7.5% chance since you will be facing it directly. Further stacking of Expertise loses the effeciency because your attacks can’t be dodged already. Primal Precision will help in achieving the soft cap.

Our abilities require 8% of Hit (263 rating), but we also use spells like Growl and Challenging Roar which is crucial to land in a raid. As any spells, 17% of Spell Hit (446 rating) is required to always land it on the target. Getting so much Hit Rating is not reasonable for us, that is why we suggest using Glyph of Growl, leaving us with 9% Spell hit (237 rating) required. Additionally, combine the glyph with raid buffs provided by Shadow Priests (Misery) or Balance Druids (Improved Faerie Fire) to further decrease the required spell hit by 3%, making it 6% Spell hit (158 rating). To sum up, combine the Melee Hit cap with Glyph of Growl to always taunt the enemy.

Dodge is at the end of the list because it is inferior to stacking Agility. Other stats have even less value for Feral Tank.

Hey, great guide! Which 2 professions would you recommend for a feral tank?