Welcome to the Marksmanship Hunter DPS guide for World of Warcraft Wrath of the Lich King 3.3.5a. In this guide, you will learn about playing a Marksmanship Hunter in a raid. The guide includes Talents, Glyphs, Gems, Enchantments, BiS Gear, Add-ons, Gameplay & Skill rotation tips.

The first build is better for new players. This build provides an additional chance to hit via 3/3 Focused Aim. It also uses Arcane Shot, which is not physical damage and therefore should be removed out of the build and rotation as you progress. At least one Hunter should have 3/3 Improved Hunter`s Mark. You can re-allocate these points from Improved Barrage. 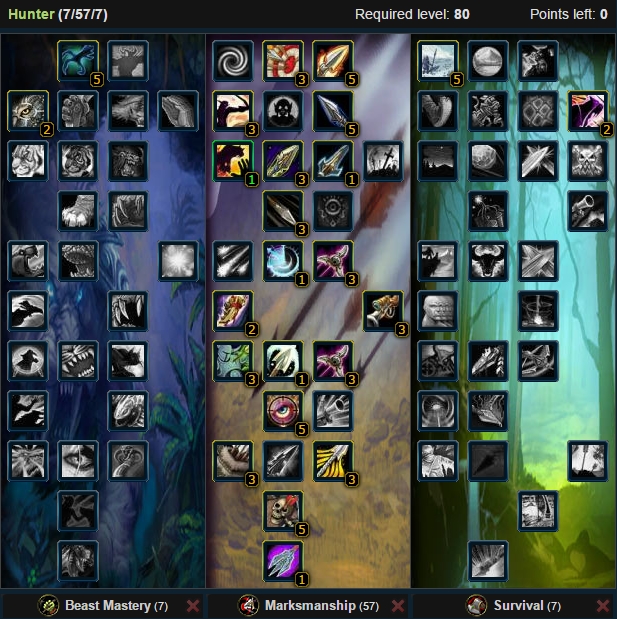 As mentioned above, Arcane Shot is not used in the rotation as you progress. Points from Focused Aim can be re-allocated to Improved Hunter`s Mark depending on the Hit Rating. 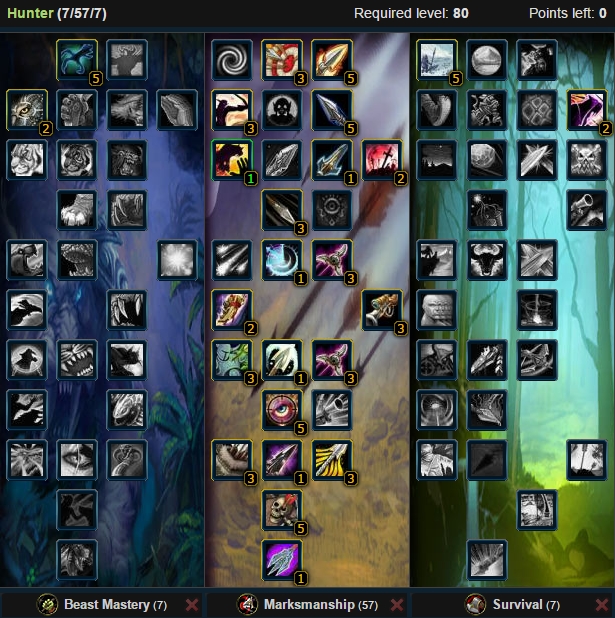 Use 1 Blue and Yellow gems to activate the Meta Gem. Ideally, put them in the items with the best socket bonus you can find. If you’re lacking hit rating, feel free to add more Rigid King’s Amber gem. Other slots should be filled with Red gems, Armor Penetration is a priority. Add Agility only after an Armor Penetration soft cap is reached.

Hit cap for raids is 8% (263 rating). New hunters should aim for at least 5% (164 rating) to always hit level 80 mobs. 3% can be obtained from Focused Aim, another 1% from Draenei passive Heroic Presence.

In the beginning, Agility is the main stat for MM Hunters, but soon enough it will be surpassed by Armor Penetration. Per calculations, the point where ArP matches Agi is when you have 700 passive ArP (from gear). This is because ArP scales with other stats, hence why new players shouldn’t blindly rush ArP in the beginning. The cap for ArP is 1400.

Once Armor Penetration outweighs Agility, it’s time to focus on physical damage. This means removing Arcane Shot from your rotation and re-allocating talents. Your physical damaging spells require you to stay still, so proper positioning means even more at this point. Minimize your movement to fully utilize the benefits of Armor Penetration. 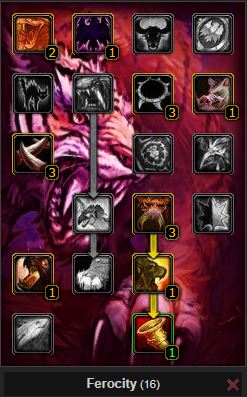 First of all, we have to decide which pet do we need. In terms of PVE and Raiding our top 3 pets are:

The talent tree for our pet is Ferocity. Unlike Beast Mastery Hunters we can’t tame Exotic Creatures and don’t have those extra 4 talent points.

Don’t forget to use Kill Command and other pet skills when you can!

Always wanted to check hunters out, sweet guide thanks 🙂

why Boar’s Speed and not Bloodthirsty?

what professions would i want jc and blacksmithing?

ArP overtakes agility comes at around 700 passive ArP from gear, until then Agility is superior.

Hi, Can I ask you on Glyph of Serpent sting. Because when I look to how much dmg done with serpent, its like 3% of all my dmg. So could be better glyph of the Hawk or different glyph? Thanks for your answerd.

So… What would be good professions for hunters in lk?

Don’t use those specs. Use Trap spec MM, most single target DPS.

Glyph of the Hawk is higher DPS glyph than KS glyph, if you’re not running trap spec MM

Trap spec: you move 3 pts from imp barrage to trap mastery in SV tree and use explosive trap glyph instead of KS/Hawk

i mean could it be useful for hunter

That is an awesome question! Enchant Weapon – Berserking relies on a melee proc, so it’s not an ideal enchant for Hunters since they’d have to find the chance to run in, land a melee attack, and then get back to range quickly, effectively losing DPS without a guaranteed proc chance.

No worries at all.

hunters do not swing the weapon and cant proc it