Welcome to the Blood Death Knight DPS guide for World of Warcraft Wrath of the Lich King 3.3.5a. In this guide, you will learn about playing a Blood Death Knight in a raid. The guide includes Talents, Glyphs, Gems, Enchantments, Add-ons, Gameplay & Skill rotation tips.

Below is the standard build for Blood Death Knight, which includes all of the needed DPS talents. The spec does rely on Armor Penetration to be efficient, meaning players might experience minor issues in the beginning. Check out the Stat Priority section for more information on Armor Penetration. Even though Morbidity is only 2/3, don’t to sacrifice points from Epidemic for it (even when using Glyph of Disease). 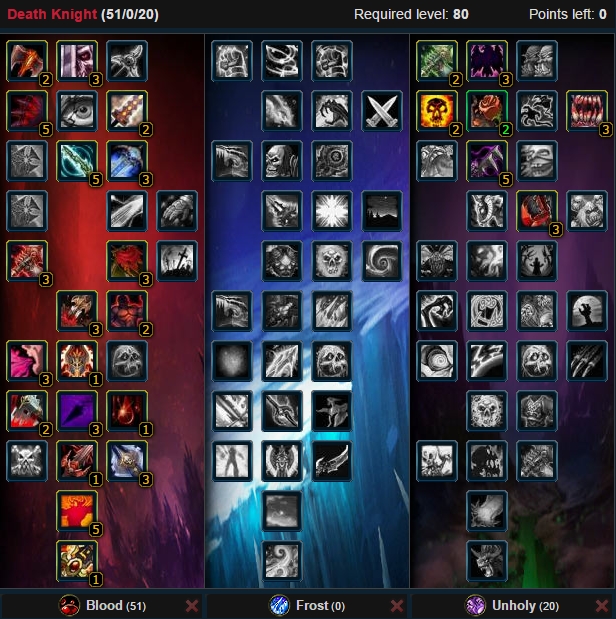 Most of the time, you will be using Blood Presence. Diseases are refreshed with your Pestilence thanks to Glyph of Disease. 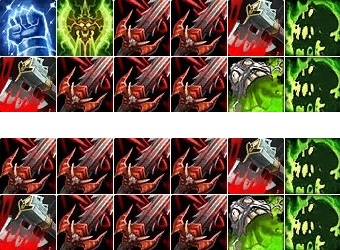 After the opener, make sure always to refresh the diseases and prioritize Heart Strike over Death Strike.

Army of the Dead – Is used few seconds before the encounter, or when changing phase. Using it while doing your combo will result in a DPS loss and a combo break.

You can combine trinkets, potions, and Hysteria before using Dancing Rune Weapon and Raise Dead, as they will partially mimic your stats at the moment of casting. Dancing Rune Weapon should be used after the initial opener because you want to set up all of the diseases on the target.

Death Knights use a combination of abilities and spells, so both melee hit and spell hit are essential stats. In raids, you want to have 8% of Hit (or 263 rating) for your melee abilities. Spells require 17% of Spell Hit, but with Virulence talent and Misery or Improved Faerie Fire on the target, the requirement is reduced to 11% (or 289 rating). A standard soft cap of 26 Expertise is advised, but it’s not as necessary as capping Hit rating.

Strength is one of the most valuable stats for Blood DK because it improves the effectiveness of every ability & spell. Strength also transfers to pets, making them more powerful. Additionally, Blood DK utilizes talents such as Veteran of the Third War, Ravenous Dead, and Abomination’s Might to increase it even more.

Armor Penetration is the primary stat of this build, stack it as much as possible. Usually, the hard cap is 100% (or 1400 ArP rating), but with Blood Gorged, it’s 90% (or 1260 ArP rating). Armor Penetration works better when stacked in higher amounts. Players may find the build lacking damage in the beginning, but it will get better when you start to accumulate more ArP. Consider gemming for Strength if there’s not enough to have at least 50% Armor Penetration from gear and trinket procs.

Critical Strike rating is a secondary stat for this build. There’s a variety of talents that increase Crits for this build: Subversion, Dark Conviction, Vicious Strikes, Improved Death Strike, Might of Mograine. Additionally, there’s Bloody Vengeance, which also stacks up to an additional 9% of damage after dealing a critical strike.

hi ! are the bloodworms really important ?

Hi. What do You sugest as weapon(s)? I used to be a tank. But now I started fresh as Dps and enjoy it so far. Thanks!

Sm is bis but any 2h hc weapon with arp works

Hi just curious to what you would recommend as professions to maximize dps? I was thinking JC/engineering?

hi! blood is good for dps? why nobody play it? unh better or blood?

Its actually pretty good but it requires a sh**load of armor penetration (you wanna have every piece of gear with armor penetration) and it also lacks the aoe potential of unh dk.
As a leveling spec its hella fun, allows you to clear a bunch of group quests by your own, I leveled my own dk as a blood dps spec before I switched to unh.

Honestly, the way that I run my Blood dps spec is to take that 1 point in vampiric blood and put it into scent of blood. I run my runic power high so I can always make sure I have my rune power abilities ready to use. Nothing is worse than when you are in rotation and you are getting ready to burst but you need to throw in an extra attack to activate DRW after you just popped hysteria, potion, etc.

Hey all Classic players. Blood DPS won’t be any good from the get go. It’s not 3.0 patch wrath where all DK specs do crazy shit anymore. 3.3 blood requires high amounts of ArP from the gear and even then you’re basically doing as much as a fury warrior on single target, but your cleave is non existant

what is better at lvl 80 unh or blood?

Hello, I’m curious. You have DK tanks as blood but when WOTLK came out tank spec was frost. Plus you added the 3 points in subversion which decreases threat by 25%. I would understand if the player is in frost presence but you also mention that most of the time you will be in blood which is where the reduced threat happens.

This is a dps spec

With Glyph of Disease Epidemic talent is rather pointless so you can free 2 points and put 1 into 3/3 Morbidity (which you say you would take if could) and 1 somewhere else.

For future reference to other players:
It is a valid option on short and easy fights when you’re just gearing up in dungeons, but when you start doing raids, it will result in a noticeable DPS loss in prolonged fights.

You don’t want to spend time refreshing diseases frequently. It will affect your combo and usage of Runes.

I haven’t done extensive tests personally, but just by looking at the combo, you can see that our priority here is maximizing Heart Strike. Epidemic equals more time on Heart Strike, less on refreshing diseases.