Welcome to the Combat Rogue PVP guide for World of Warcraft Wrath of the Lich King 3.3.5a. In this guide, you will learn about playing a Combat Rogue in the arena or a battleground. The guide includes Talents, Glyphs, Gems, Enchantments, Add-ons, Gameplay & Skill rotation tips, Team setups.

This build has Subtlety talents.It uses Riposte and Ghostly Strike (with a glyph). Overall, your Stealth is better in this build.

Malice gives you critical chance and that’s an important stat for you, but if you’re feeling confident in your crit – you can go for Setup combined with Sleight of Hand and Elusiveness at a cost of Serrated Blades – this will give you more utility. Going for  Ruthlessness is also an option. 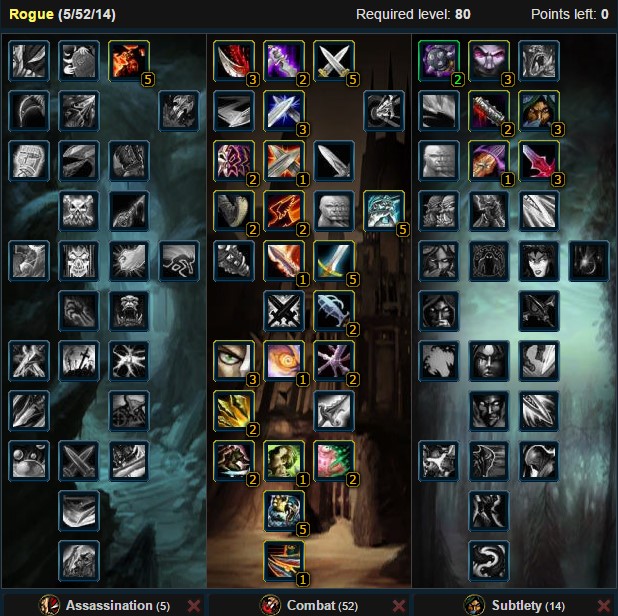 Rest of the sockets are filled with Red Gems.

Keep in mind, that Combat Rogue needs Resilience since he’s often exposed to open fights. You may choose damage over resilience if you are not focused in fights or if you are going for a fast game.

Use two 2.6 PVP Swords for this build. Apply Instant Poison IX on the main-hand weapon and Wound Poison VII on off-hand.

Why Swords? Swords give you a chance of a second attack, which can crit and can do poison damage as well. Mace has a stable 15% Armor Penetration which is OK since it’s easier to get that hard-cap ArP cap. If you don’t have a better weapon then a Mace is a fine variant.

Why not Axes? Axes have a lower minimum damage, which will result in less damage per hit since you won’t be always having the maximum damage from every hit. The damage spread is just bigger and there’s a good chance of having lower damage because of that.

i agree. he cant afford Havock that is why he is Bitter

Laughably bad, you don’t even bother to explain basic combos.