Welcome to the Assassination Rogue DPS guide for World of Warcraft Wrath of the Lich King 3.3.5a. In this guide, you will learn about playing an Assassination Rogue (Mutilate) in a raid. The guide includes Talents, Glyphs, Gems, Enchantments, Add-ons, Gameplay & Skill rotation tips.

The first build provides more Energy regeneration which is useful when constantly changing targets. Keep in mind that you can also swap points into Vigor for more effective target-swapping. 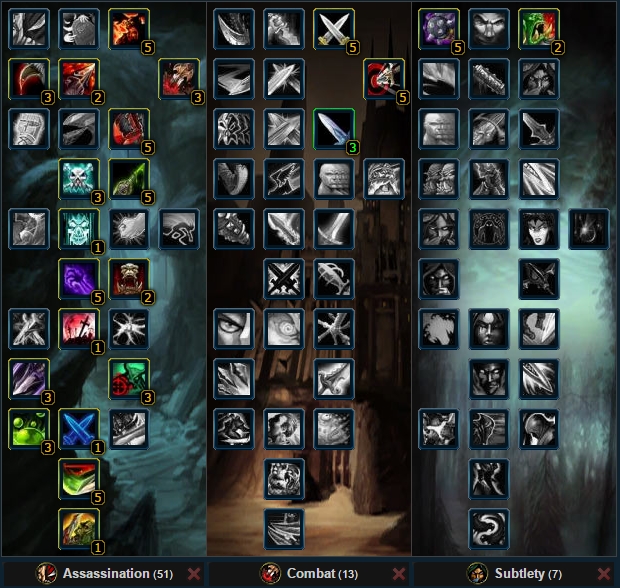 The second build is for focusing on single targets. It will increase your haste, thus increasing poison procs, which results in more damage in the long-run. 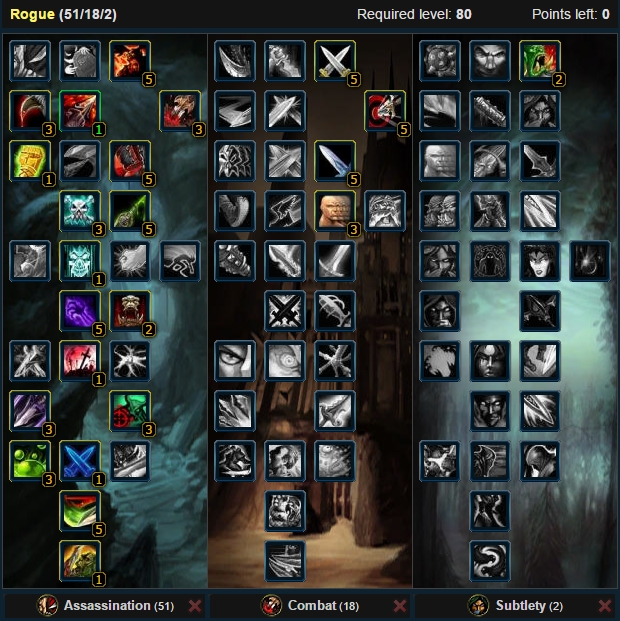 Open up from Stealth with a Garrote or Ambush, if someone else applies the bleed. Use Hunger For Blood and use that 1 combo point to activate Slice and Dice. Get 4-5 Combo Points using Mutilate and use the main finisher move – Envenom. Slice and Dice will be renewed thanks to our talents.

Keep up your Hunger For Blood and use Mutilate with Envenom. 20 Seconds after the fight use your Vanish to trigger Overkill. Use Vanish and Cold Blood on cooldown.

Cold Blood is used only on Envenom.

Important: Envenom gives you a buff, that procs Instant poison 75% more often and increases Deadly Poison chances by 15%. After Envenom try landing 1-2 Mutilate and Envenom again. The main thing here is to have the Envenom buff at all time. This will increase your damage a lot!

Dual-wielding requires a significant amount of hit rating to never miss a melee attack. It is unobtainable without sacrificing other crucial stats. The 315 Hit rating + Precision mentioned above will provide 9.6% + 5% of melee Hit [32.79 hit rating = 1% melee hit].
That being said, having an increased amount of Hit in late-game isn’t the worst idea since it gives an increase in DPS.

A standard 26 Expertise is required to remove the possibility of dodged attacks.

It is crucial to have a combination of both Attack Power and Haste, as they are the main stats for this spec. Haste synergizes with other stats and starts to be the superior stat after you have approximately 4k Attack Power.
Critical Strike Rating is an excellent secondary stat for Mutilate Rogue, but it’s best to acquire it passively through gear upgrades.

Engieneering ench for boots hands and back are better than the listed ench?

no need to keep rupture up ? only to use overkill maybe ?

I highly recommend to drop Vigor and Blood Spatter talents and go for Fleet Footed. The mobility is very important for any meele dps.

Also, I do believe that Mongoose is still preferred over Berserking for Assassination rogue in wrath do to the fact it provides an insane Agi buff, provides a haste/attack speed buff, and still has a phenomenal proc rate.

Mongoose is bad because it’s only 120 agi. poison crit does not scale with agi. berserk = 400 ap = scales with everything

Mastery scales a lot better makes your envenoms hit like a truck.

yeah this is for wotlk though 😀

Yes, mastery is the best on this expansion:)))