Welcome to the Retribution Paladin PVP guide for World of Warcraft Wrath of the Lich King 3.3.5a. In this guide, you will learn about playing a Retribution Paladin in the arena or a battleground. The guide includes Talents, Glyphs, Gems, Enchantments, Add-ons, Gameplay & Skill rotation tips, Team setups. 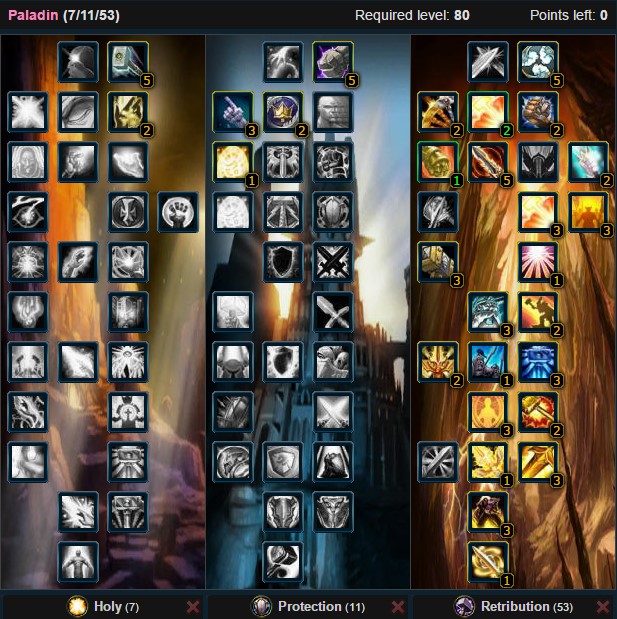 Keep your opponents as debuffed as possible. This will make it harder for them to dispell a real CC. Land crits on your enemies to get an instant Flash of Light with The Art of War procs. Use Judgement to get a proc, since it has a high crit chance.

Don’t use Holy Light since it costs too much mana, and it has a long cast-time, making it vulnerable to interruption. Remember, that healing can also be done with Divine Storm.

If you’re looking forward to bursting down your enemy then try to use Avenging Wrath and your trinkets at the same time. Save some spells for that moment and cooperate with your team.

These talents are kinda wrong and here is why. You dont need Improved Blessing of Might in pvp because gbok is always superior buff that is used as ret.
For arenas you want Divine Guardian and Improved Hammer of Justice because increasing the duration of your sacred shield is going to help your teammates in survivng and decresing the cooldown of your stun by 20sec is massive since it helps in seting up the kill rather than spending 5 points into Seals of Pure wich increases the damage, in pvp not everything is about damage.
About glyphs you dont really need Glyph of Exorcism even if you do manage to get Art of War talent proc you want to use it for Flash of Light plus Exorcism itself doesn’t really do that much damage, it’s decent but nothing special plus it has 15sec cd. So better option for third glyph is Glyph of Turn Evil yes this is only useful against dks and locks but instant fear on Gargolyte or Succubus is going to make huge difference plus you can use it aswell against dks if they have Lichborne up or against Demo locks when they use Metamorphisis.

dont teach them how to defeat a dk !!!