Welcome to the Combat Rogue DPS guide for World of Warcraft Wrath of the Lich King 3.3.5a. In this guide, you will learn about playing a Combat Rogue in a raid. The guide includes Talents, Glyphs, Gems, Enchantments, Add-ons, Gameplay & Skill rotation tips.

The first one is more effective when you don’t have your Armor Penetration capped because Rupture ignores armor. Second is for fights where you constantly change your target. The damage is more or less the same. Don’t forget that you can spend 1 point from Ruthlessness or Poisons [Tier 4] into Vigor to have an extra 10 energy. 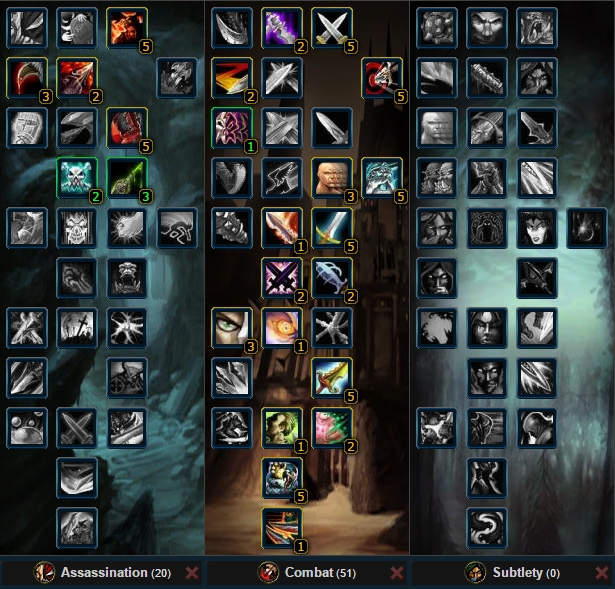 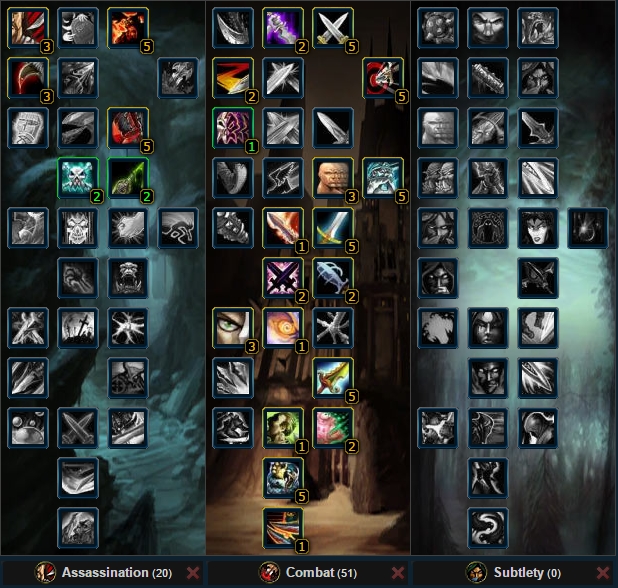 Opening up with a Sinister Strike, which can proc a glyph. Doing another one or two Sinister Strike to drain all the energy. Finishing move: Slice and Dice followed up with a Killing Spree. This start will give us a burst of damage.

Afterwards, we are gaining Combo Points with our Sinister Strike while using our Finisher move depending on the priorities below:

Dual-wielding requires a significant amount of hit rating to never miss a melee attack. It is unobtainable without sacrificing other crucial stats. The 315 Hit rating + Precision mentioned above will provide 9.6% + 5% of melee Hit [32.79 hit rating = 1% melee hit].
That being said, having an increased amount of Hit in late-game isn’t the worst idea since it gives an increase in DPS.

A standard 26 Expertise is required to remove the possibility of dodged attacks.

In the beginning, you will want to focus on stats such as Attack Power, Haste, and Critical Strike Rating because you won’t have enough Armor Penetration to make it work effectively. Attack Power and Haste will provide steady DPS, while Crit rating synergizes with Glyph of Sinister Strike. At this stage, aim for approximately 35% of Crit chance.

is this viable pre icc?

Yes although heavily gear dependent, if you want to just grab a pair of daggers and go crazy mut spec will be much better early phases heading into TotGC

can we use dagger for off hand?

What about A.rushin the rotation. Like never use it when using KS bcz its an energy waste. Or should we use it before of after KS. For Rupture bulds should we SS during A.Rush given all DoTs and buffs are maintained.

what blue gems can use