Welcome to the Fury Warrior DPS guide for World of Warcraft Wrath of the Lich King 3.3.5a. In this guide, you will learn about playing a Fury Warrior in a raid. The guide includes Talents, Glyphs, Gems, Enchantments, BiS Gear, Add-ons, Gameplay & Skill rotation tips. 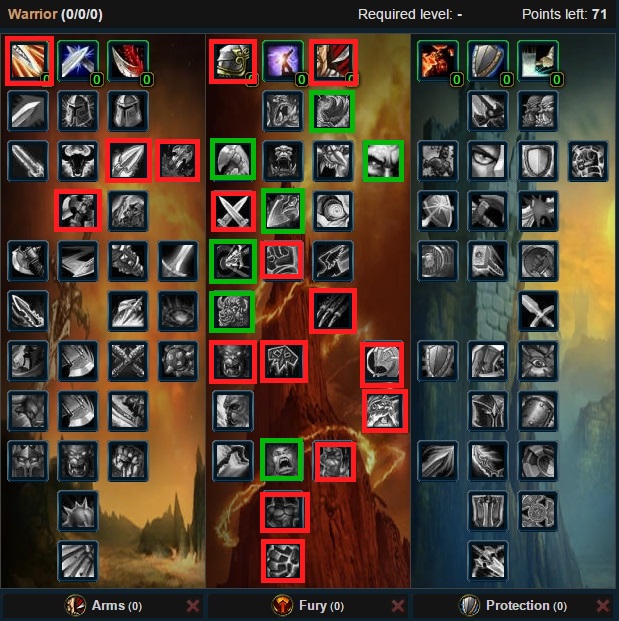 Everything marked with red is mandatory, no skipping. Green – situational.

What will you take in the tier 1-2 Arms tree is totally up to you.

Talents like Rampage or Precision are situational. Precision is useless if you have good gear with a hit cap. Rampage does not stack with other Warriors Rampage and similar effects. 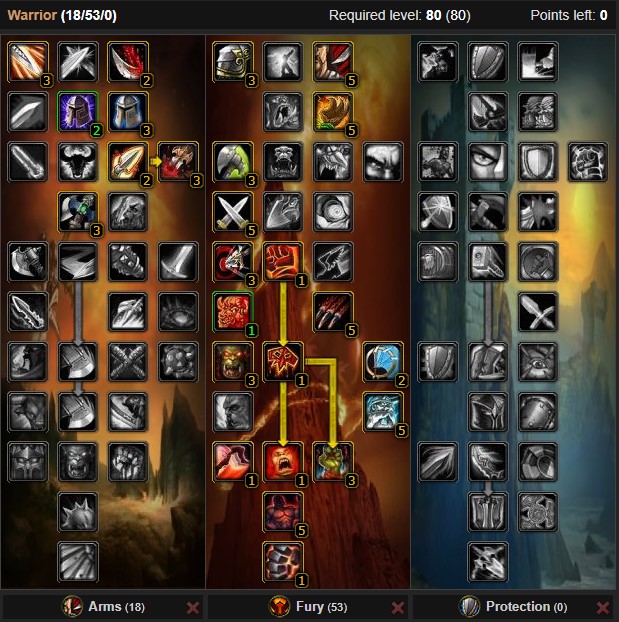 When dual wielding, the hard cap for Hit is 27%. Most Fury warriors get the soft cap – 8%, which guarantees to hit with abilities. The reason is that getting 27% would sacrifice so much valuable stats and result in damage loss. Expertise soft-cap is 26, which removes the chance of your attacks to be dodged & parried.

Strength is the core stat for Warriors, which increases the effectiveness of the abilities. In the beginning, new players will find gemming for Strength (while gathering ArP gear) to be more efficient. After getting around 50% of ArP, you can make the transition to ArP and focus on it entirely.

Critical strike rating is a secondary stat, but never the less a valuable component of your DPS. We have Impale and Deep Wounds to make critical strikes even more powerful. Crit has a hard cap of 100% (for abilities), which is unobtainable. 55% is a reasonable and obtainable amount of Crit with BiS gear, which is the cap for regular attacks (if we count using 8% Hit and 26 Expertise). Maximizing crit is something you want to focus on in later stages of the game, while gradually improving it with gear upgrades.

Haste is last on the list because it doesn’t add much value to this build. The stats mentioned above outweigh Haste by far. You are likely to encounter Haste on items if you decide to include some leather/agility items in your gear, for example – Aldriana’s Gloves of Secrecy.

What about the minor glyphs? What should we pick?

they don’t add enything in your damage, but glyph of battle, command and Bloodrage are great options for minors

what about flasks/food buff/ potions

i am also curious about this.

engineering for sure, secondary JC is best but BS is okay too. JC just helps a lot to hit certain stat points while gearing up like arp/exp cap and in general gives the most stats

Isn’t StS hc bis trinket with dbw hc ? Same with Halion 25hc neck. Was this guide made before halion ?

Also I thought bis cape was toc25hc tribute one

Anyone know about a BiS list for fury pre-raid? Thinking of gear that you buy with tokens and gear from HC in the same list.

This guide is only the half…… wheres the professions? where the Pre-Raid BiS?

Gonna drop in here and point out that there’s some glaring differences here compared to landsoul’s stuff from EJ forums. Also devil dwarf (aka kleavage) who was first and top 3 in a lot of world parses did not gear like this either.

is shadowmourne not BIS?

Worst guide i’ve ever seen lel the items are wrong not all but many, no Professions no Flasks, Food also no Cooldowns or anything holy shit…