Welcome to the Beast Mastery Hunter DPS guide for World of Warcraft Wrath of the Lich King 3.3.5a. In this guide, you will learn about playing a Beast Mastery Hunter in a raid. The guide includes Talents, Glyphs, Gems, Enchantments, Add-ons, Gameplay & Skill rotation tips.

The first build is for fresh level 80 Hunters. Depending on your current hit rating, you can re-allocate points from Lethal Shots or Careful Aim to Focused Aim. If the hit cap (8%) is reached, the last point can go into Invigoration, Catlike Reflexes or Improved Tracking. 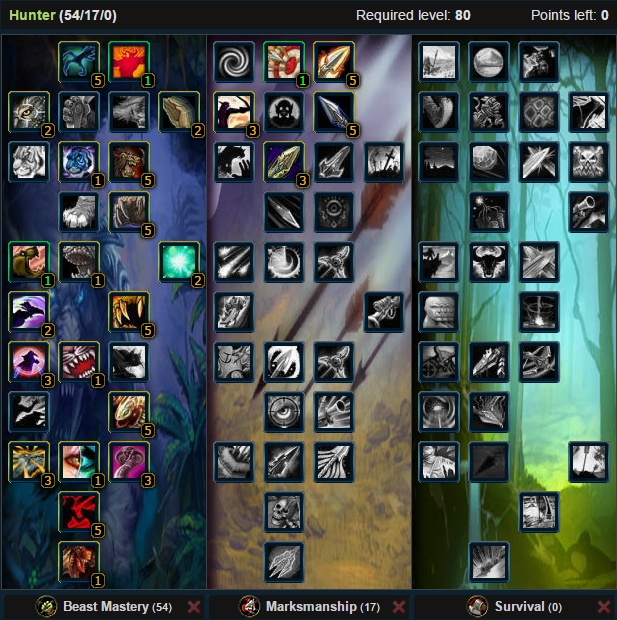 Once you’ve progressed, it’s time to make some changes to your build. The second build is meant for players with a higher gear level. Talent points from Improved Arcane Shot and the above mentioned unallocated talent point are put into Improved Tracking. The logic behind this: tracking improves our overall damage, which also scales with the increased amount of armor penetration you should have by now. Arcane shot (15-20% of overall DPS) is also improved by tracking. This creates a synergy effect that outweighs 3/3 Improved Arcane Shot. 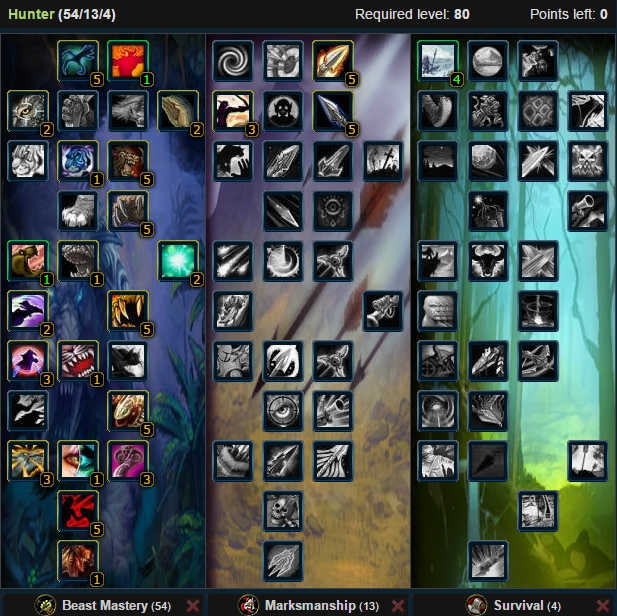 Use 1 Blue and Yellow gems to activate the Meta Gem. Ideally, put them in the items with the best socket bonus you can find. If you’re lacking hit rating, feel free to add more Rigid King’s Amber gems.

Hit cap for raids is 8% (263 rating). New hunters should aim for at least 5% (164 rating) to always hit level 80 mobs. 3% can be obtained from Focused Aim, another 1% from Draenei passive Heroic Presence.

Attack Power is the main stat for BM Hunters. Your pet is also affected by the amount of Attack Power you have. Our next stat is Agility, which also increases the Critical strike rating and Attack Power. Stack these stats as much as you can.

Critical strike rating is another useful stat for BM. Unfortunately, it isn’t passed to pets as it is with attack power. There’s no need to stack it much more than 50%. Armor Penetration doesn’t play a major role in BM’s stat priority. The reason is that a major chunk of damage is done by pets. Also, abilities like Arcane Shot, are not affected by it. But that doesn’t mean that we will ignore the stat completely – it’s just not a top priority for this spec.

One last thing worth mentioning is Intellect. With Careful Aim taken, Intellect converts into Ranged Attack Power with a 1:1 ratio, while still giving us an increased mana pool. We can fully utilize this stat which is often present in Mail items. 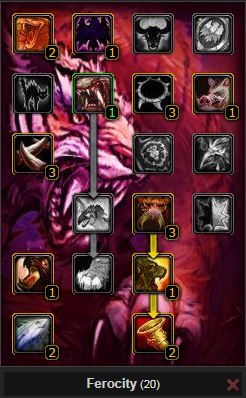 First of all, we have to decide which pet do we need. In terms of PVE and Raiding, our top pets are:

Talent tree for our pet is Ferocity, and here is a spec made with those 4 extra Talent Points from the Beast Mastery talent.

Don’t forget to use Kill Command and other pet skills when you can!