Welcome to the Unholy Death Knight PVP guide for World of Warcraft Wrath of the Lich King 3.3.5a. In this guide, you will learn about playing an Unholy Death Knight in the arena or a battleground. The guide includes Talents, Glyphs, Gems, Enchantments, Add-ons, Gameplay & Skill rotation tips, Team setups.

Corpse Explosion is taken for that extra burst. It has to be timed properly and can sacrifice your pet so be careful with it. 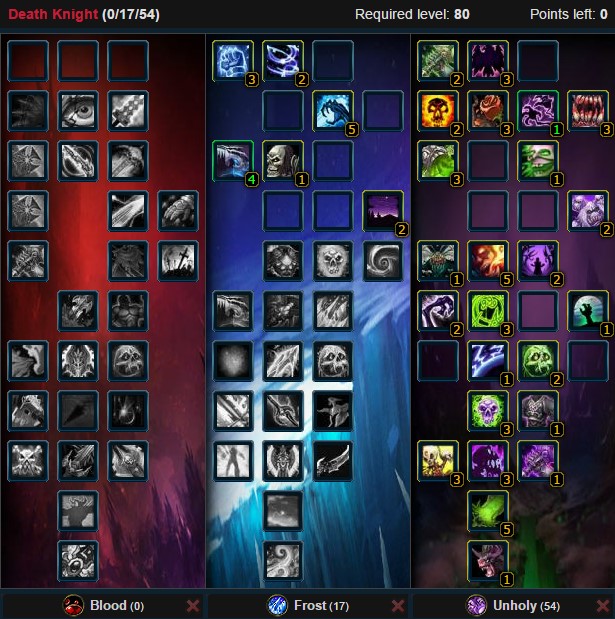 Wandering Plague is mostly taken for Battlegrounds because it just works better with multiple targets. Still a viable choice. 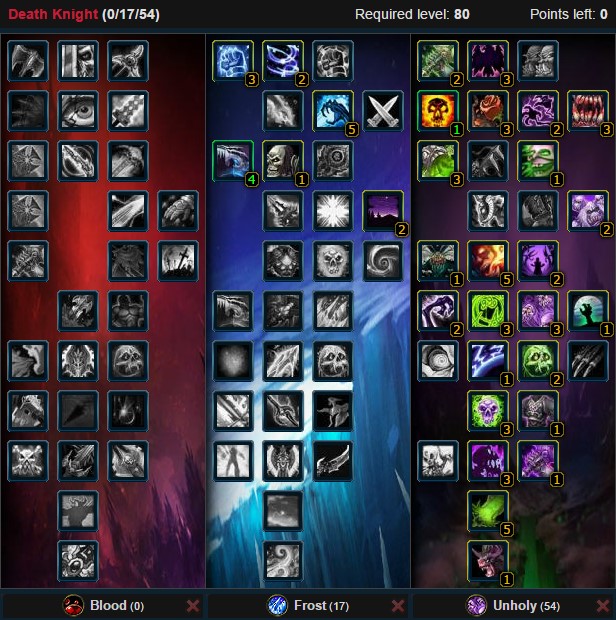 The first two are mandatory. The third glyph can be replaced with Glyph of Disease or Glyph of Icy Touch

When you see a spell cast – you have 4 options to interrupt it:

Add-ons improve your gameplay by a lot. It is necessary to utilize add-ons, since they play a vital role in your performance, whether you are in a raid, arena or at the auction house.

Check out our Add-ons Page which will provide you with a download link and some configuration info. The addon versions are for WoW WotLK 3.3.5a. The site has multiple versions of the add-ons, so if you need another version – you can also search for it there.

for 2v2 Arena is the diszi priest the number one, bcs you and the Priest will never die and the priest makes dmg to

Gameplay: Keep your diseases up 100%(Icy Touch or Chains of Ice in pursuit and plague strike), tons of addons to track that, Death Strike for health, Scrourge strike for more damage, both of those abilities do better with both diseases up. When getting low on health you can also, AMS, let them hit you, this will fill your runic power, then lichbourne and deathcoil yourself to heal. Keep Bone shield on constant CD. Use Gargoyle for burst or heals pressure.