Welcome to the Unholy Death Knight DPS guide for World of Warcraft Wrath of the Lich King 3.3.5a. In this guide, you will learn about playing an Unholy Death Knight in a raid. The guide includes Talents, Glyphs, Gems, Enchantments, Add-ons, Gameplay & Skill rotation tips. 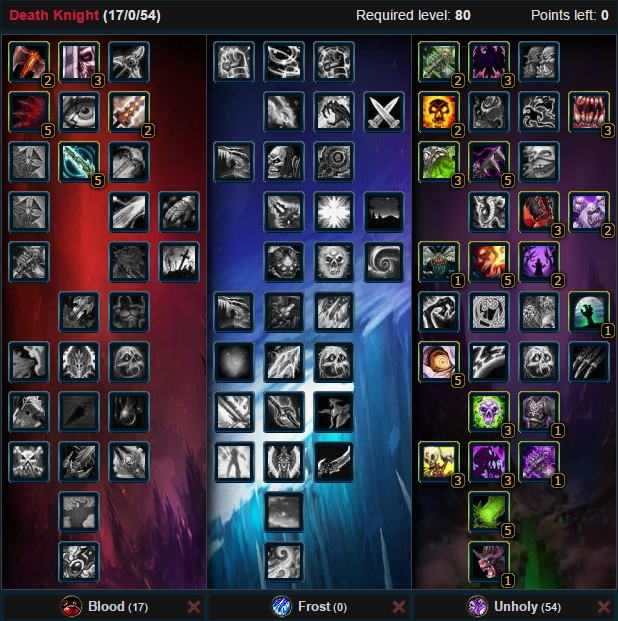 The second build is similar, but we’re trading 3 points from Dark Conviction for Reaping. This build is for moderately geared players (2P Tier 10 set and above). The loss of 3% crit will be covered by improved gear. Meanwhile, we get access to Death Runes, optimizing the rotation to focus on single-target damage. 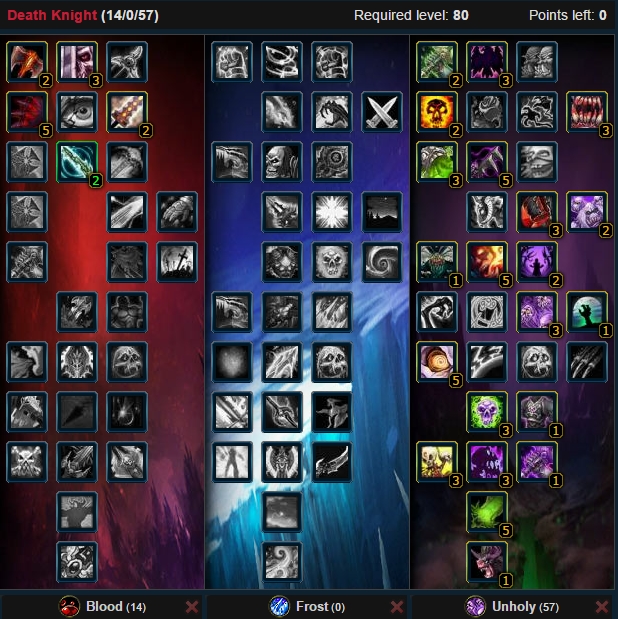 The third build is a high-end alternative for moderately geared players. The Frost subspec provides Icy Talons and Endless Winter, making auto-attacks the highest percent of your damage. Haste becomes more important, as it scales of Icy Talons. 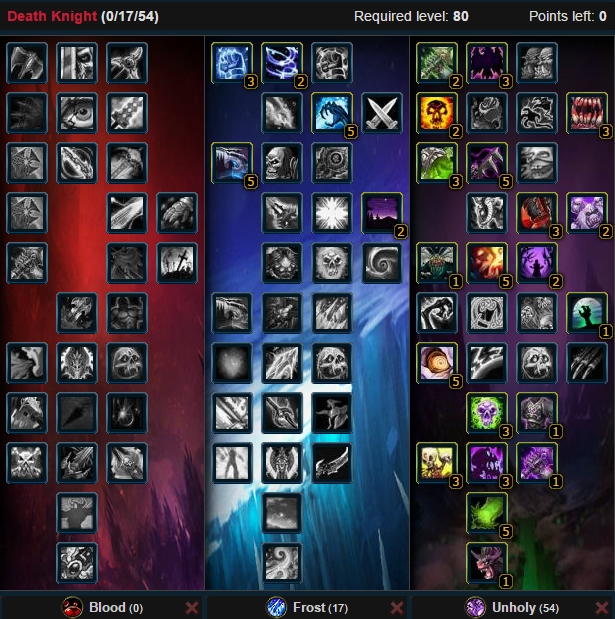 Choose the remaining two glyphs depending on whether you want to focus on Single target or AoE damage. Use the following glyphs for improved Single target damage:

Most of the time, you will be using Blood Presence. Below, we have different starter rotations depending on the build. To continue the rotation, be sure to maintain diseases at all times and continue with Blood Strike, Scourge Strike & Death Coil

When facing multiple targets, start by applying and spreading the diseases with the following combo:

After that, continue with the below-mentioned rotation. There is no need to re-do the first combo if you’re using Glyph of Disease, as Pestilence will refresh the diseases.

Army of the Dead – Is used few seconds before the encounter, or when changing phase. Using it while doing your combo will cause a DPS loss and a combo break.

Use Summon Gargoyle when you have full buffs and procs on you because your stats will be partially transferred to it. It takes 60 Rune Power to summon, so you won’t be able to use it instantly when the fight starts. The Gargoyle inherits Haste from the Unholy Presence, but not the damage from the Blood Presence, so use it beforehand, then swap back to Blood Presence.

Death Knights use a combination of abilities and spells, so both melee hit and spell hit are essential stats. In raids, you want to have 8% of Hit (or 263 rating) for your melee abilities. Spells require 17% of Spell Hit, but with Virulence talent and Misery or improved faerie fire on the target, the requirement is reduced to 11% (or 289 rating). A standard soft cap of 26 Expertise is advised, but it’s not as necessary as capping Hit rating.

Strength is one of the most valuable stats for this Unholy DK because it improves the effectiveness of every ability & spell. Strength also transfers to pets, making them more powerful. Unholy spec heavily relies on the Ghoul and therefore enhances it even further with Ravenous dead and Glyph of the Ghoul.

Critical Strike rating is a secondary stat for this build. There’s a variety of talents that increase Crits for these builds: Subversion, Dark Conviction, Vicious Strikes, Ebon Plaguebringer. Additionally, there’s Wandering Plague, which also increases in proc frequency depending on your crit chance.

Can you also include the BIS list for PvE Unholy Death Knights?

I think you have the images for Standard and Reaping rotations flipped.

Should also include AoE Opening Rotation, which mirrors the rune consumption pattern of the (corrected) Standard DPS Rotation:

I only mention this after recently seeing many well-geared Death Knights using Blood Boil before Death and Decay, which I later tested to yield about 20-25% less AoE DPS with single target Frost subspec Strength+Haste build vs. three level 80 target dummies. D&D before diseases was also tested, but did not make a noticeable difference on sustained AoE DPS. However, opening with Death and Decay can lead to threat problems, so I would not recommend this variation of the rotation.

The images for rotation don’t work for everyone because not everyone associates the icon to the ability name. Please also make text versions.

Don’t ever use Glyph of Disease when playing unholy!
Refresh your diseases manually. The glyph makes all disease timers the same. Manual application with icy touch, plague strike, and pestilence results in 3 separate timers for diseases to proc Wandering Plague, rather than just 1 timer with Glyph of Disease.

Refreshing manualy cost runes which i can spend as necrotic strike. Can you explain why no glyph of disease?

Using disease glyph is also dependent on the type of gear set you use , for gear sets that boosts your scourge strike , like the first set in naxx patch (5% increased crit chance) and the last one in icc (10% increased damage) , you better use this glyph to increase the number of the scourge strikes.

Honestly, you are opening the wrong way. This is the opening for a frost rotation, so you have your multipliers active.

As for UH boss fights you want to open with blood strike (does minimal dmg as it is, so the diseases multiplier is just shit) for the 5% multiplier from desolation. Afterwards you want to use plague strike, for the 10% multiplier from rage of rivendare. Then you use icy touch, which gives us our strongest disease: frost fever, which is again buffed by 20% from our glyph of icy touch.

Also. if you want optimal dps on both AoE and single target, you might want to look into the Morbidity talent, especially if you use a glyph of death coil or DnD. These are some crazy multipliers and will easily compensate for the loss of reaping, dirge or 1 point in Necrosis.

Hi, why use the Chaotic Skyflare Diamond instead of the Relentless Earthsiege Diamond please ?

Crit is more valuable than Agility, but Relentless Earthsiege Diamond is still a worthy alternative.
It’s worth mentioning they also have different requirements to active.

Hi,
Ok thank you. I was wandering because + 21 Agility gives us almost as many crit than + 21 Crit, and you use the Earthsiege Diamond in the other DK builds

Nice catch! Fixed the images.
AoE combo would be a nice addition. I’ll try to add it soon.

The reason is because your dots counts as spells and the crit you get from agility is only aplied to your melee crit and the spell crit wont benefit from it, ergo your dots wont get any dmg increase from agility

and put to Subversion in blood spec

Unholy Blight deals shadow damage as well, and in addition some mobs in ICC dispell the diseases so Unholy Blight is a must

Is it a big dps loss to not take gargoyle?For some reason i just dont like using the runic power for it instead of death coil and just cant seem to ever use it instead of just continuing death coiling

Last edited by The Barbz
-12
Reply

Yes, it is a big loss. You should use it after your first round of runes. Pop your trinkets and preferably have Rune of the fallen crusader up. The gargoyle will use all the AP from those proc’s. The only reason not to use it on CD is if there is a phase of the fight that requires extra DPS

Last edited by The Nerz
3
Reply

Hey can u tell me how can I use gems do I need any proffesion to use gems?