Welcome to the Destruction Warlock DPS guide for World of Warcraft Wrath of the Lich King 3.3.5a. In this guide, you will learn about playing a Destruction Warlock in a raid. The guide includes Talents, Glyphs, Gems, Enchantments, Add-ons, Gameplay & Skill rotation tips.

There are two main specs for Destruction Warlock. The first one is better when you can just stand still and use your spells. Soul Leech and Improved Soul Leech will allow you to be full health and mana all the time. You won’t be using Life Tap and will be able to concentrate on dealing damage. 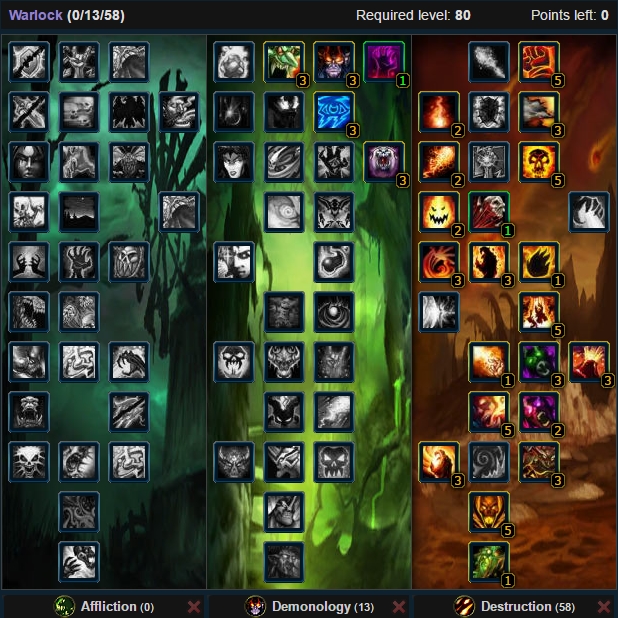 The second build is more for a dynamic fight, where you have to move constantly. Here we don’t take Soul Leech and Improved Soul Leech because Unholy Power is considered to be more profitable in this situation. This build is for fights where you can use Life Tap without losing DPS because you will have to move anyway. 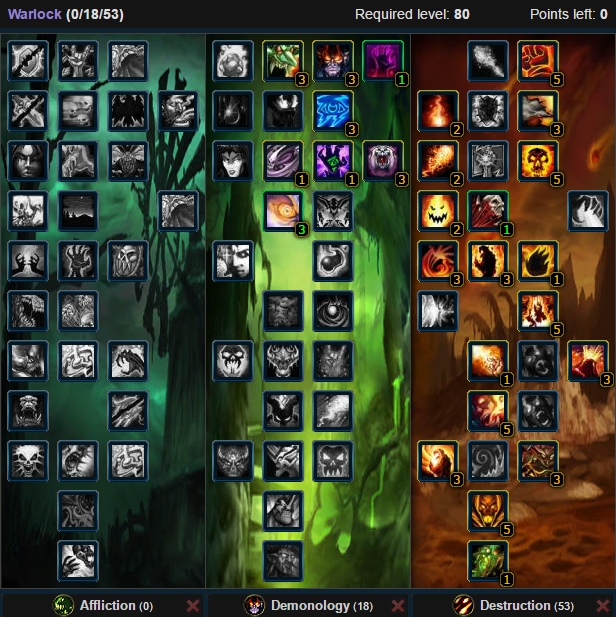 Rest is filled with Red Gems

Keep up Immolate and Corruption on the target at all times. Incinerate and Conflagrate are the main spells in your rotation. Chaos Bolt is used on cooldown.

Your pet of choice is Imp. It deals the most damage with this spec and the Empowered Imp talent, which gives us a 100% critical chance after the imp deals critical strike.

Spells require 17% to always hit the target. This number can be reduced by:

With either a Balance Druid or Shadow Priest in your group, you will require 14% (367 hit rating). It’s safe to assume that you will have either of these classes in raids, where the hit requirements are the highest. [1% Hit = 26.23 Hit Rating]

Spell Power is the primary stat for the build as it improves the efficiency and damage output of all spells. It also converts partly into Attack Power and Spell Power of your pets.

Haste is another significant stat for Warlocks. It increases the number of spells you can cast in a certain period and thus drastically improving DPS. The soft cap for Haste is 50% (1640 haste rating) with raid buffs. Keep in mind that Haste stacks multiplicatively. Additionally, Backdraft helps to reduce the global cooldown of spells.

Critical strike rating is last on the list only because Haste outperforms it when stacked enough. It is still a great stat, and Destruction Tree has different talents to increase the crit chance, such as Devastation, Backlash, Empowered Imp, Fire and Brimstone, and a crit multiplier – Ruin. There is no cap for this stat.

why do we use corruption ?
is just to have a damaging debuff ? if yes is it worth the gcd ?

That’s a good question. Wouldn’t Immolate already count as a damaging debuff, though?

I don’t use corruption, it’s just another thing to keep track of for a +/-500dps