Welcome to the Frost Death Knight DPS guide for World of Warcraft Wrath of the Lich King 3.3.5a. In this guide, you will learn about playing a Frost Death Knight in a raid. The guide includes Talents, Glyphs, Gems, Enchantments, Add-ons, Gameplay & Skill rotation tips.

Both builds mentioned below have the same core talents taken in the Frost spec, and an Unholy subspec, but there is space for changes. The difference will be in how you allocate these optional talent points. These talents are: Killing Machine, Chill of the Grave, Subversion and Blood-Caked Blade.

Note: 2/5 Black Ice is taken only as a filler talent to continue through the talent tree. It is not as efficient as other optional talents.

The first build is for players who are starting dungeons. It can be used until you start joining raids. Here, we maximize the burst potential, which is useful in shorter fights and when constantly swapping targets.

We use Killing Machine to compensate for the low amount of critical strikes, Subversion for increased burst and threat reduction, and Chill of the Grave for additional runic power generation. 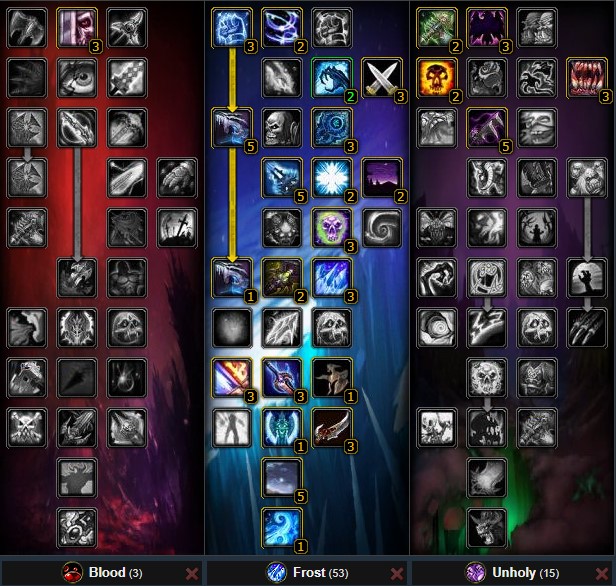 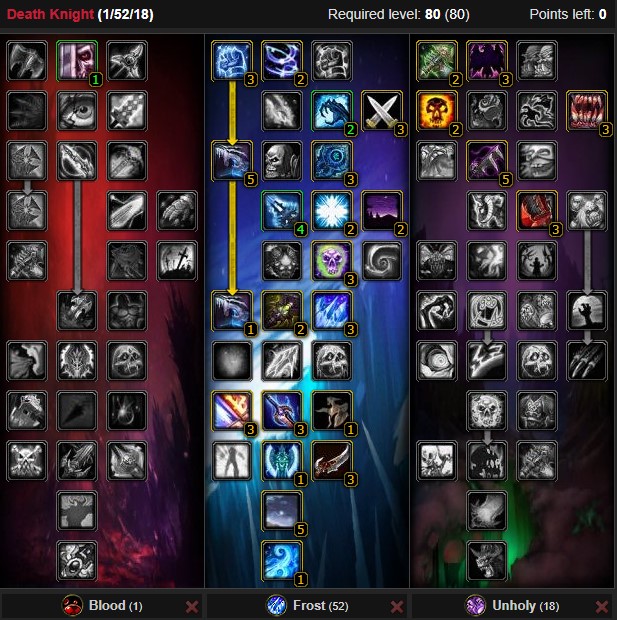 As you can see, these builds do have some space for changes, so feel free to experiment!

You want to fill most of the slots with Red gems. Use Yellow and Blue to activate the Meta gem.

Army of the Dead – Is used few seconds before the encounter, or when changing phase. Using it while doing your combo will result in a DPS loss and a combo break.

You can combine trinkets, potions, and Unbreakable Armor before using Raise Dead, as ghoul will partially mimic your stats at the moment of casting.

Death Knights use a combination of abilities and spells, so both melee hit and spell hit are essential stats. Capping Hit while dual-wielding requires you to have 27% of Hit (or 886 rating). It would eliminate the chance to miss with your regular attacks, but 27% is unreachable without sacrificing a lot of useful stats.

Start with abilities – the requirement is 8% of melee Hit. For this, you will require 5% (or 164 rating) combined with 3% from Nerves of Cold Steel. Ideally, you want to improve it by capping Hit for Spells. Spells require 17% of Spell Hit, but with Virulence talent and Misery or Improved Faerie Fire on the target, the requirement is reduced to 11% (or 289 rating).

Additionally, a standard soft cap of 26 Expertise required to remove dodged attacks. We can use the Tundra Stalker talent combined with racial weapon passives to reduce the requirement from gear.

Strength is one of the most valuable stats for Frost DK because it improves the effectiveness of every ability & spell. This build utilizes talents such as Endless Winter, Ravenous Dead to increase Strength even more. There is also Unbreakable Armor, which temporarily increases Strength.

Haste is a secondary stat which greatly synergizes with this build because of the Improved Icy Talons talent. This talent provides 1.25 Haste for every 1 point of Haste from gear. Haste is something you want to focus on in the end game, definitely after Armor Penetration.

Critical Strike rating is another secondary stat. As with all Death Knight builds, most of the talents improve the critical chance/damage of individual abilities (instead of giving a flat % crit chance), which means that it won’t show in the stats window. This build uses Annihilation, Killing Machine, Rime, Vicious Strike, Subversion* (if taken). Also, there’s Guile of Gorefiend, which serves as a damage multiplier.

Nice guide. Just one question, if we get the glyph that refreshes the duration of our diseases, what’s the point of putting 2 points into Epidemic? Or is that simply the best option for that talent row? Just curious, thanks 🙂

well it is the best choice obviously, all the other ones are useless for frost dps DK

With Epidemic, we use those 6 seconds to deal damage with main abilities instead of re-applying diseases with Pestilence. This will have a noticeable effect on DPS in prolonged fights.

I see. Thanks Malphaz for giving me the answer I was looking for 🙂

Very Good Question.
in my opinion you shoulnt get epidemic,and not only that you sholdn’t get any unholy talent.
instead you get blood talents and you focus your build on Runic power Frost Strike build.
2/2 Butchery 3/3 Subversion 5/5 Bladed Armor 5/5 Dark Conviction (in blood)
and beacuse you are focused on frost strike you get 5/5 Killing Machine instead of 4.
and with this talent these glyphs Make More sense
( Frost Strike<Less Runic Needed More Damage )
(Pestilence<No Epidemic Plus Better Usage of [Blood of the North] )
Hope it helps 🙂

Hi, the problem with the blood subspec is that you have to refresh diseases more often. So like Malphaz said, with the unholy subspec you can use this 6 seconds to deal more damage with main abilities and that will have a noticeable effect in prolonged fights 🙂 So I think the blood subspec can be a good option for dungeons, but you will prefer unholy in raids.

As mainly weapons what you prefer? two handed weapon or 2 one handed?

Hi! Thanks for this guide. I created my first dk and this guide helped me a lot. I have one question, which weapons should i get when in outland and which should i get in northrend? Thanks one more time for this amazing guide!

why Rune of razorice in main hand and Fallen Crusader in off hand and not other way around ? any important reason or no ?

Hello , this guide i awesome but i have aquestion about agility.

what does it gives to frost dk?

Well really you should always take strength over agility as it scales well with fallen crusader procs which you get a lot,but agility shouldn’t be completely ignore as it does give crit.Basically dont turn down a peice of gear just cus it has agility,but dont actively search out agility gear

Last edited by The Barbz
0
Reply

Just wondering, is frost dps the go-to spec in wrath all the way? or is unholy gonna be better later expansion?

Its always a very viable option.
But ofc with shadowmourn in endgame the Unholy spec will be slitely ahead. But there are quite view who can get to shadowmourn 😀
A lot of groups underestimate the dmg of frost dk and prefer a unholy dk. But in my opinion frost is at least on par with unholy and a lot of fun to olay.

Question:
I have a two axes equipped. One 2.6 speed and the other 1.5. Which one should be in the main hand? And what presence should you use for max dps?

Should I gem for strength or armor penetration, or combine them 50/ 50?

u gem for str until u get to softcap arp

Dumb question, all of the dps builds should go with blood pressence? Or which one shoul i go with for this build.

For example, if running dungeons then it’s Unholy Pres for trash and Blood Pres for bosses.

Question about chill of the Grave: if you only put one point into the talent, it says it gives you 2.5 RP. How does this actually happen? Can you have 0.5 runic power? Does this talent sometimes give you 2 RP and sometimes give you 3 RP? Thanks.

Hi, you can not take one point from Killing Machine or Chill of the Grave in the second build, because if you do you will not have enough points required in your Frost tree to go on (you will not be able to take talents requiring at least 35 points, because you will have 34)

That one point is already taken away on the screenshot of the second build. Killing machine is already 4/5.
I’ll rephrase the text for better understanding.

Relentless Earthsiege Diamond is listed for Meta but Agility is not even in the Stat Prior list……. explain this please.