Welcome to the Protection Warrior guide for World of Warcraft Wrath of the Lich King 3.3.5a. In this guide, you will learn about playing a Protection Warrior in the arena or a battleground. The guide includes Talents, Glyphs, Gems, Enchantments, Add-ons, Gameplay & Skill rotation tips, Team setups.

Standard build for Protection Warrior when you have BiS gear, all the T10 pieces you need (read Gameplay section). 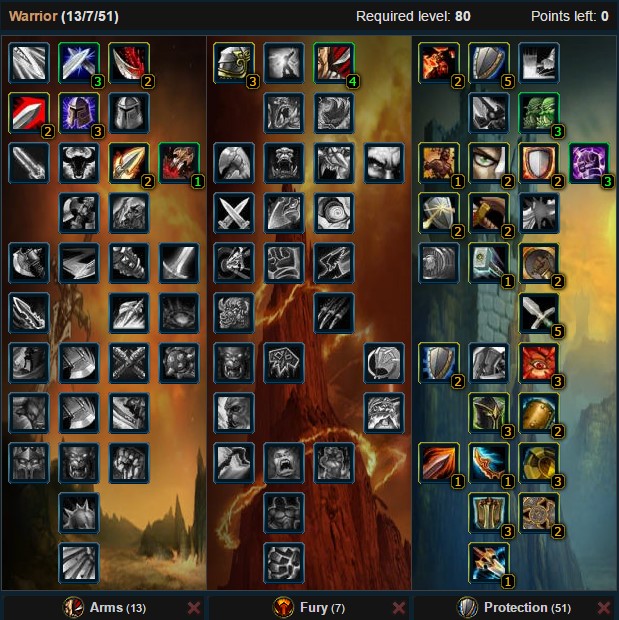 Others are more or less viable glyphs which are very situational. Swap them with Glyph of Intervene

50% Armor Penetration (minimum) → 6% Hit Rating → 30k HP → about 30% Critical hit → Resilience (500 or less).
The reason for low Resilience is that your Armor and Defensive Abilities will save you from most of the threats, allowing you to go for even more damage. Protection Warriors use PvE gear in PvP for that sole reason. Really good players actually use most of the PvE gear and double damage trinkets, so you can start with some PvP items and replace them when you feel comfortable.
It is needed to acquire 4 T10 items.

These two set bonuses will grant you a huge damage boost.

This is late, but can you give the list of items that you use?

Would it be worth taking Piercing howl? So you don’t need to stance dance for hamstring

I personally don’t think its worth losing out on what you get in the arms tree. Anyone that will kite you will likely take a shield bash at some point between the stuns.