Welcome to the Mutilate Rogue PVP guide for World of Warcraft Wrath of the Lich King 3.3.5a. In this guide, you will learn about playing a Mutilate Rogue in the arena or a battleground. The guide includes Talents, Glyphs, Gems, Enchantments, Add-ons, Gameplay & Skill rotation tips, Team setups. 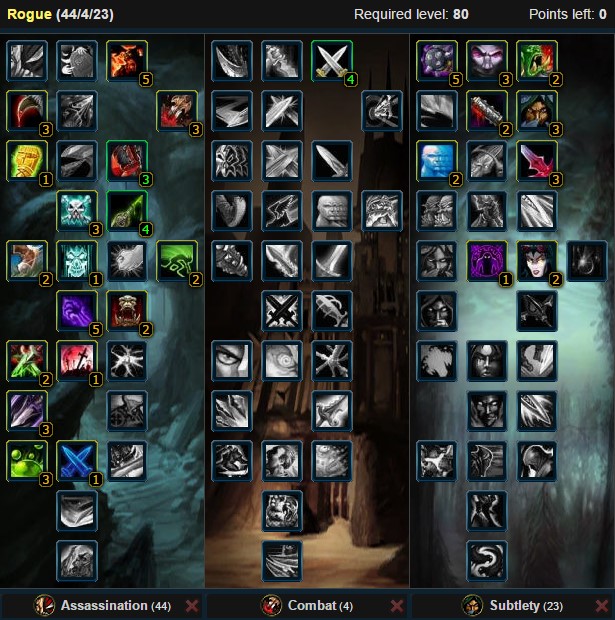 Rest of the sockets are filled with Red Gems.

Keep in mind, that Mutilate Rogue needs Resilience since he’s often exposed to open fights. You may choose damage over resilience if you are not focused in fights or if you are going for a fast game.

For Main-hand – choose a dagger with 1.8 speed. Apply Wound Poison VII on the main weapon.

For Off-hand – choose a dagger with 1.4 speed. Apply Deadly Poison VIII on the off-hand weapon.

You should play initiative, serrated blades is garbage for assasination

I could restealth a bunch. Restealth required breaking combat, so sprint would work as well as other skills and distraction would make the player change directions. Restealthing was the necessity. From a 1v5

Yo this John guy *HAS* to be trolling right?? Mutilate/Envenom absolutely SLAPS due to it fully ignoring armor. A Main Hand weapon that is as fast as you can get is the best way to apply poisons extremely quickly (In phase one that would be Webbed Death) Either MH or even both. Two slow daggers indeed WAS the meta back in Wrath originally because Envenom wasn’t buffed as it is now until later on in the expansion and is definitely still plausible with 2x Sinister Revenge because it is hands down the best dagger available atm (P1).

I do however prefer Initiative over serrated blades 100% as the armor pen does just about nothing for us. Getting those Combo Points off the rip is huuuge.

My typical openers with Mage/Rogue in 2s with of course some variations depending on comp/opponents gear/human error or RNGeezus etc.. look something like this:

-Sap the kill target as the mage simultaneously sheeps the other enemy.

-Next, into a Mutilate putting us solidly at 5 Combo Points with loads of pressure already and approximately 5-6 seconds still left on sheep. If at any point the sheeped target uses trinket, they catch an immediate fistful of pocket sand to the face in the form of Blind. (By now my mage is also hard casting fat dam into the kill target as well)

-If they bubble or use some other form of hard disengage I just Cloak>Vanish and my Mage Ice Blocks or Invis outta there and we reset. They’ve spent a lot just surviving at this point and we pretty much have it in the bag.

(This is at lower Rated matches btw like 1600-1800, I know that at higher MMR it tends to get more complex than just “Gib someone on the opener” but that by no means implies that Mut is weaker at higher rated play)

No spell penetration needed? Since we’re using magic attacks, and there is always a gift of the wild

hey i wanna know how much haste i neeed plz

Can you add a section for openers? I’ve seen some interesting ones, like Cheap shot + shiv + Envenom to get the envenom buff going.

Additionally, a Mutilate/Assassination build will use two slow daggers for maximum affect of the ability. A fast offhand would be for a Sub Rogue build. Again you would NEVER under any circumstances use Deadly Poison for PvP. The DOT will break the cc of any gouge or blind you attempt to use on the target.

with out deadly you cant even envenom lol

Envenom is for PvE. The Mutilate ability itself is your go to ability. If you need to blow combo points, use Eviscerate or Kidney Shot in PvP. Again, Blind and Gouge HAVE to be available to use for any serious PvPer to control opponents. You are gimping yourself without being able to use those.

this is just wrong lol envenom is high burst u find yourself dying to not posion or mutilate. and the spec is played around having a set kt or waiting out poison to cc lawl big brains. so again u 100% use deadly lol or wasting ur time playing sin

I laughed my ass off at the 1.4 speed BiS off hand, why even make a guide when you clearly can’t even play a rogue? :’D There are also other parts that are questionable in this guide, so who’s guide did you steal and not fully understand when you made this?

Dude, why’d you ashame yourself that badly, 1.4 is actually correct choice lol.
Gosh, people nowadays, zero competency or clue but talking like you’ve a degree on that topic, while in fact just being a 1.5k rated clown.

No it isn’t, mutilate takes the damage of both daggers and combines them. You want 1.8 MH and OH. This build IS all wrong.

Do any single one of you 1k clowns actually know that this build is actually focused on applying Deadly Poison fast, instead of trivial offhand damage difference from Mutilate? 1.8 speed offhand dagger would result in less DP stacks and slower full damage from Envenom, or would require more Shiv. That sounds perfectly optimal, NOT.

If this is all about stacking deadly fast… you would take the fast dp weapon in mh, cause mutilate procs mh poison 2 times…

Why are you stacking deadly in PvP? This is a PvP guide we are commenting on, yes?

To the downvoter – it’s a PvE guide then? It says Mutilate Rogue PvP at the top of this page.

Downvoters seem to love the guy who wrote this guide huh? But don’t have the wherewithal to refute my points? Downvote away guys.

YES U STACK DEADLY FOR PVP WHATS SO FUCKING HARD TO UNDERSTAND ABOUT IT. u that dumb u cant wait out a poison if u need to cc ur kt?

u can 100% and a lot do use a fast OH as SIN LOL this isnt 2015 times have changed and they ability to sim and min max has brought a lot more light to shit that wasnt known back in the day.