Welcome to the Discipline Priest Healer guide for World of Warcraft Wrath of the Lich King 3.3.5a. In this guide, you will learn about playing a Discipline Priest in a raid. The guide includes Talents, Glyphs, Gems, Enchantments, Add-ons, Gameplay & Skill rotation tips.

The first build is a standard Discipline build. It has survival spells like Spell Warding and Desperate Prayer but doesn’t go any further into Holy because our main goal is Discipline talents, not hybrid. This build is more for Heroic, where there are other healers as well. 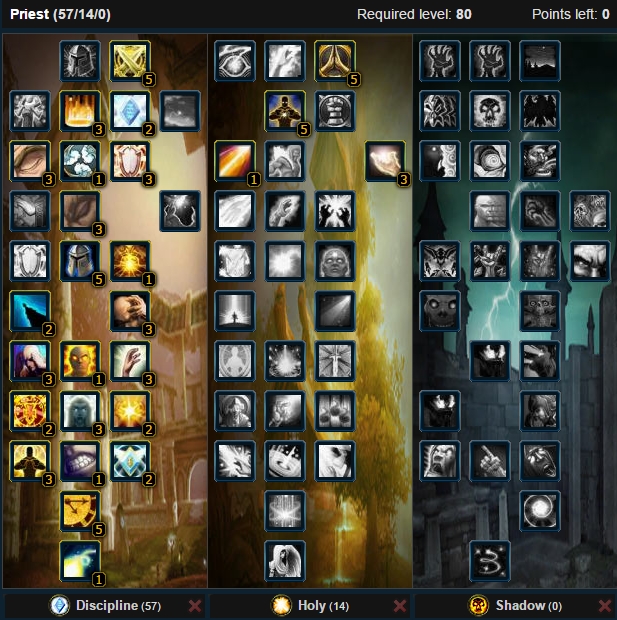 The second build is for players who like to heal with Renew. Suitable for Normals with its lower survivability, when there are no other healers or they heal not enough. Don’t forget to consider using Glyph of Renew with this spec. 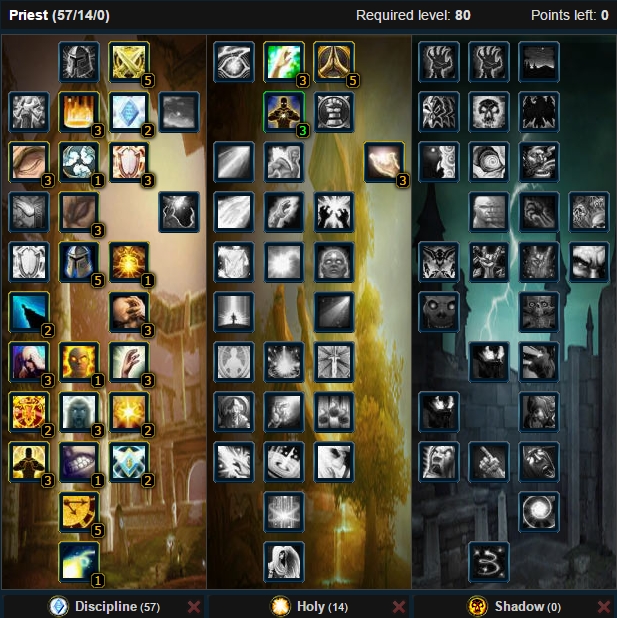 Try replacing some enchants if you have problems with mana. Some viable options: Enchant Chest – Exceptional Mana, Arcanum of Blissful Mending, Greater Inscription of the Crag

Your main role in the raid is to both shield and heal. Power Word: Shield is the primary spell of this spec. Anyone who is about to take damage and doesn’t have a Weakened Soul debuff should be shielded.

Rapture is your ticket out of “Out Of Mana” situation. Example of how to use it:

Your main tank is about to be beaten to death. You use Power Word: Shield. Boss hits the tank, and the shield is destroyed because it absorbed most of the damage, the tank is saved. Good job! Now Rapture will proc.

Same situation. Tank’s about to get hit. You use Power Word: Shield. But since your shield to too powerful (due to better gear), it will not be destroyed from the damage and Rapture will not proc. In this case, using lower rank shield is a viable option to maintain the mana regeneration.

Second thing I want to point out is this spell – Power Infusion. It doesn’t stack with buffs like Bloodlust and Heroism (only the mana-saving part stacks). It does stack with Potion of Speed, Berserking, Wrath of Air Totem, Swift Retribution, Improved Moonkin Form

Priority of using Power Infusion on different classes depending on their Haste scaling.

Last, but not least, if things get messy – use it on yourself or the tank/raid healer!
Keep close and be ready to use Desperate Prayer and Pain Suppression on yourself or someone else.

Spell Power is the primary stat for this spec because it increases the absorb effect of the shields and the effectiveness of every spell overall. Stack Spell Power as much as possible without sacrificing other stats too much.

Discipline Priests have a low cap of Haste thanks to Borrowed Time and Enlightenment talents. Having 11% (434 rating) is considered the Haste cap from Discipline Priest because it gives you enough Haste to cast Power Word: Shield every second. There are also raid buffs which can lower the Haste requirement even further:

Critical Strike Rating is a useful secondary stat. Every critical heal has an extra 50% healed, but the Discipline Priest gets additional value from this stat because of the Divine Aegis talent.

Intellect is also a significant stat for any healer as it increases your mana pool. With Rapture talent, it also serves as a superior mana-regeneration stat. Since Rapture gives back 2.5% of the total mana, having enough Intellect will grant you more mana than it was spent initially on the Power Word: Shield.

This discpline guide is wrong! I copied the exact talent, rotations, and glyphs, and got stupidly low heals in a guild raid and got into some scoldings. Especially the glyphs, idk why there’s no PW:S

Guides here are relatively decent for new players but this one is straight up bad. Badly explained stats, glyphs are badly picked, Rapture is definitely not “your way out of OOM situation”, Renew anything but maybe on tank when you are expecting hit and whole raid is full and bubbled as required. Those are just facts.

And then there is discussable things..

I hope this is just result of just bugged core on private server and this guide works atleast there, because there are huge differences comparing specs on servers, but god damn.

Your gem suggestions are wrong.

The mana and crit aren’t interesting, I agree. And you’d rather have that 1 extra spell power from a Runed Cardinal Ruby. But you’d be wrong!

You’re wrong because of Mental Strength. And to a smaller extend the Ember Skyflare Diamond.
These combined add 17% more intellect.

Given that there aren’t any talents that would improve the spell power from a Ruby that wouldn’t also bump up the superior spell power of an Ametrine, the Ametrine wins as the Best In Slot gem for Disc priests.

why do so many people think priests get spell power from int? Is this like a private server thing or something?

Did you play on a private server or something?

Before the Mental Strength talent.

It’s been over a decade. How are people still getting this wrong?

Intellect does not add Spell Power on Priests.
https://prnt.sc/26c52r0

dude I’m so embarrassed for you right now

It’s been over a decade. How did YOU get this wrong?

Disc was my off spec back on live WotLK. That off spec healed ICC 25m Heroic with good gear.

first tier in Holy. swap one point between holy special and Improved Renew depending if you need the crit for your procs.

Inner focus is a waste when you need it, it is another button push that could make or break. only useful if you are a main heal and you shouldn’t be. Pass on it.

Also pass on Inner Fire and go with Silent Resolve. In raids you shouldn’t be getting hit enough for it to make a difference. Reduce threat is also handy. Disc doesn’t pull alot of threat except on trash pulls. Not getting hit vs getting hit for slightly less. More useful in 5 mans where you may pull more with lowbie tanks.

Next tier point in abosultion to reduce dispel costs. useful. since you are on raid heals dispel is also on you.

In holy Improved Healing and Insperation for mana reduction and more damage mitigation. alternativly take out improved healing into focused will if you need crit for procs.

Glyphs Penence for CD. Flash heal for mana. Shield for an extra heal. minors whatever.

Play style: Again Raid healing mostly. Shield the raid renew when aoe damage is expected. Try to save penence for tanks unless a raid member gets hit hard. Flash heal when needed between penence if needed. other wise reupping shields/renew in between penence. Always keep a shield on the main tank when every CD is up, every cool down put a prayer of mending on tanks. At higher gears, your mana won’t be an issue unless the fight is dragging on. Avoid most AOE heals. They are a mana drain.

Hopefully you don’t but if you do have two disc priests, assign each one their own group and helping out the other when needed (but never with a shield). A decent Disc and Druid can keep raids up pretty easy just with Shields and HOTs

Spell power is obvious.
Int for more mana and crit.
Crit for mitigation procs (inpseration and divine aegis)
Haste mostly for faster flashes. If you need to use flash heal you will need to cast it a lot.
Spirit/MP5 for similar functions. Mana regen.

Important to remember… NEVER USE PAIN SUPPRESSION ON TANKS.. uh.. i know this because a friend did it…. really… .. um yeah 😉