Skinning is one of the main gathering professions in World of Warcraft Classic. After killing and looting beast monsters, you have the option of skinning their corpse to collect some leather. The leather you collect is used to craft armor and kits with the leatherworking profession. This guide will illustrate how and where you can level from 1-300 in skinning!

Leveling your skinning skill is fairly simple, and can easily be done while leveling your character at the same time. In order to skin a monster, it must be a beast. You’ll also need a skinning knife, and the appropriate skinning level for that monster. Many players opt to learn skinning because of how profitable it is. Because it is a necessity for leatherworking patterns, crafters will need the leather you skin.

As a general rule, the skinning requirement for a monster is 5 times their level. For example, if you were to kill a level 36 plainstrider, you’d need a skinning level of at least 180 to skin it! This makes leveling your skinning skill extremely simple. Simply divide your current skinning level by 5 and head to a zone with monsters of that level!

Alternatively, you can follow this guide, which will conveniently and concisely show you some of the quickest zones to level your skinning skill!

Your best option is to visit a major city for your faction and ask a guard where the skinning trainer is. For Alliance players, you’ll have an easier time training in Stormwind or Ironforge. Horde players can use Orgrimmar, Thunder Bluff, or Undercity.

Any class can choose skinning, but there are a few in particular that benefit from it. These are all classes that wear leather armor, as skinning directly translates to materials needed for leather armor recipes. Here are the best classes to pick up with skinning:

Both Alliance and Horde players will visit a total of six zones to reach 300 skinning, swapping to a new location every 50 levels. The Alliance and Horde have nearly identical leveling paths, differing only for the first 100 levels. You’ll need to visit both Kalimdor and Eastern Kingdoms to reach 300 skinning. Here’s all of the zones you’ll travel to:

Once you’ve learned the skinning skill, purchase a skinning knife and make your way towards Goldshire. Kill boars and low level wolves found in the surrounding areas. You can also kill and skin cows, deer, fawn, sheep, and rabbits. Skin them until you reach 50 skinning, at which point you’ll want to pick up journeyman skinning. 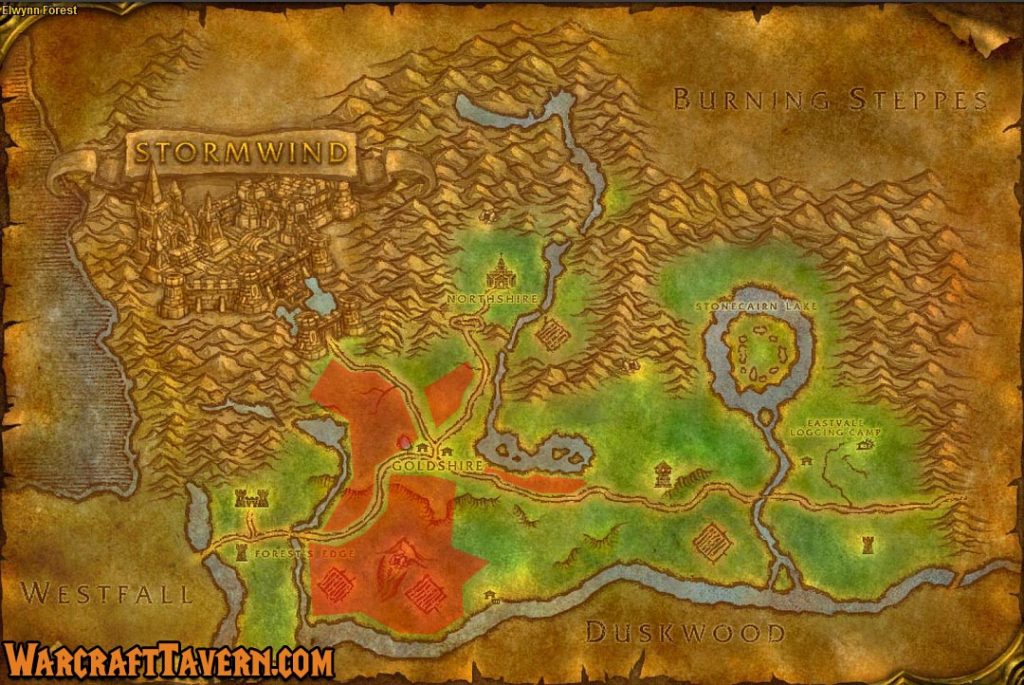 After unlocking skinning and buying a skinning knife, head to almost anywhere in Durotar. If you are a low level you can start at the south part of near Sen’Jin Village. You’ll find no shortage of raptors, boars, and scorpions to kill and skin here. 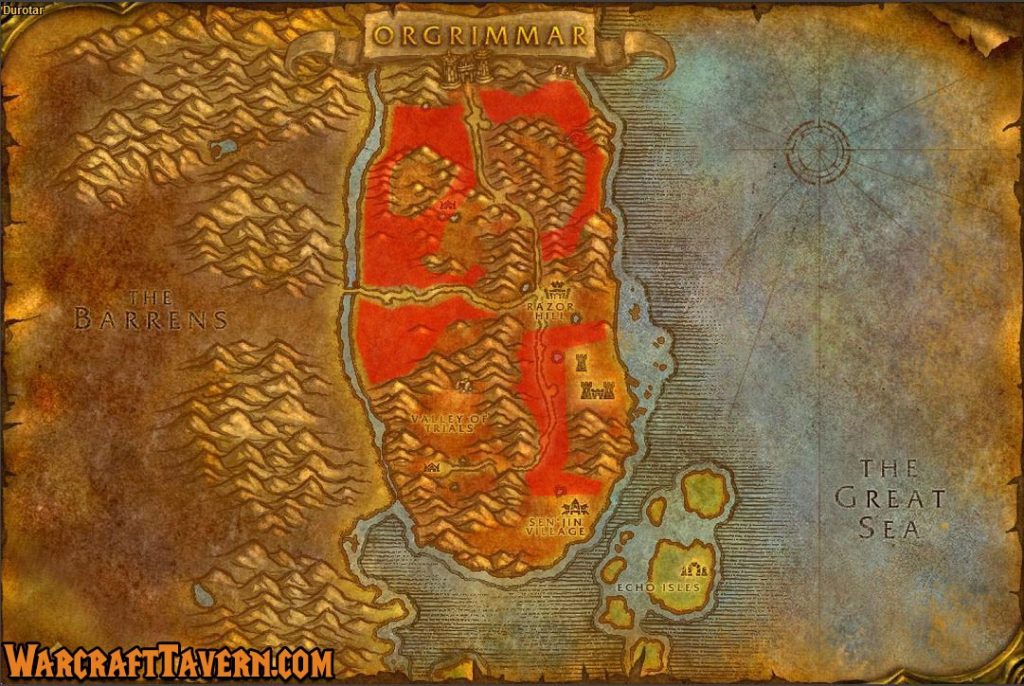 After learning journeyman skinning, head to Sentinel Hill in Westfall. You’ll notice several boars and coyotes in the area. Slay and skin them until you’ve reached at least 75 skinning.

Note that in this map areas highlighted in orange are not as optimal unless you are a higher level as there are many other mobs such as Gnolls, Defias, and/or vultures. 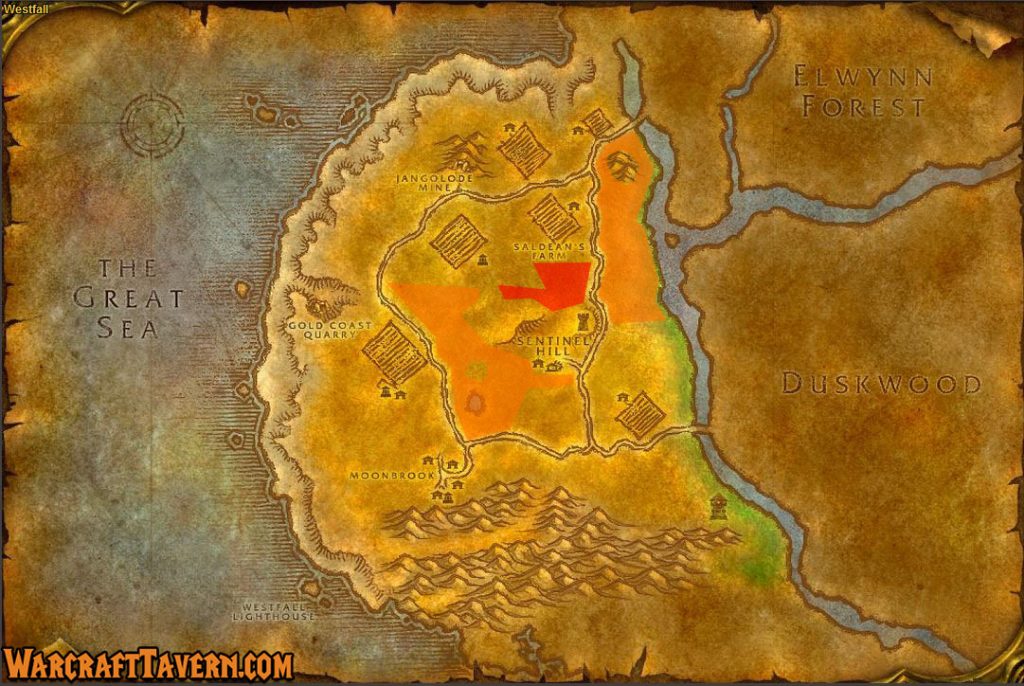 Now that you have a new skinning level cap, stay around The Crossroads in The Barrens. There are hordes of raptors, lions, and plainstriders that are all skinnable. In fact there are so many skinnable beasts in The Barrens that if you are running from Durotar you may not even be able to make it to The Crossroads before hitting level 75. 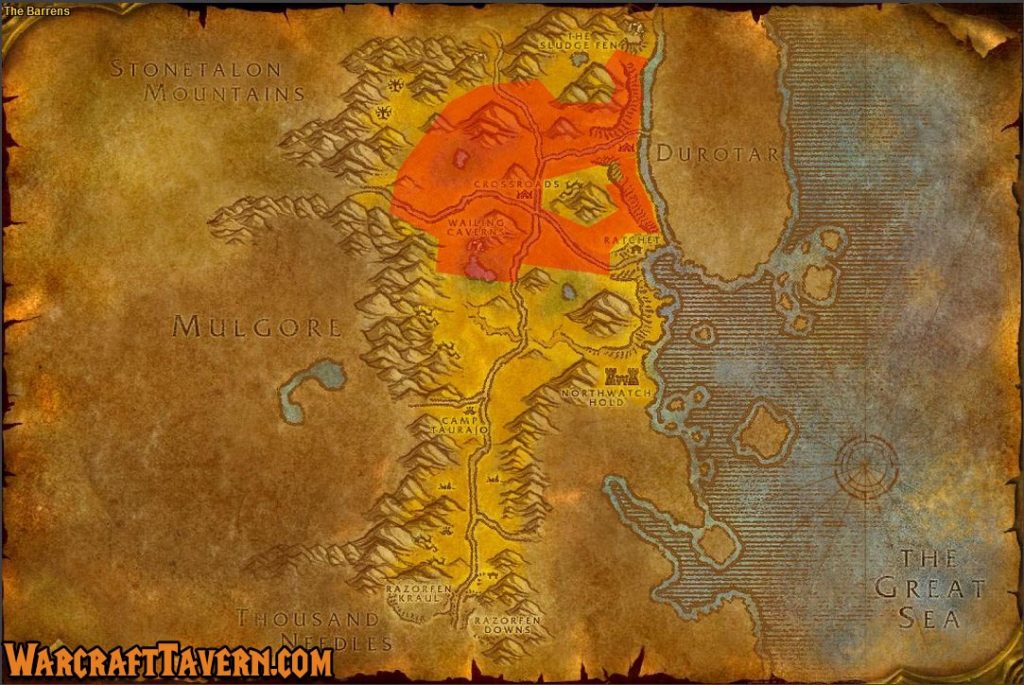 After reaching 75 skinning, you’ll want to stay in Westfall. Keep skinning boars, but feel free to head south and kill higher level boars found there as well. The more, the merrier!

Continue to use the maps from above for these levels.

The Horde have it quite easy because The Barrens is packed full of skinnable beasts. Once you’ve reached 75 skinning, you can start heading towards Ratchet as there is an abundance of higher level beasts around there.

Continue to use the maps from above for these levels.

Alliance players should be heading into the Wetlands at this point and had a skinning of roughly 100. If your skinning skill is not at least 100, stay stay in Westfall, or head to Loch Modan and skin the beasts there until it is. 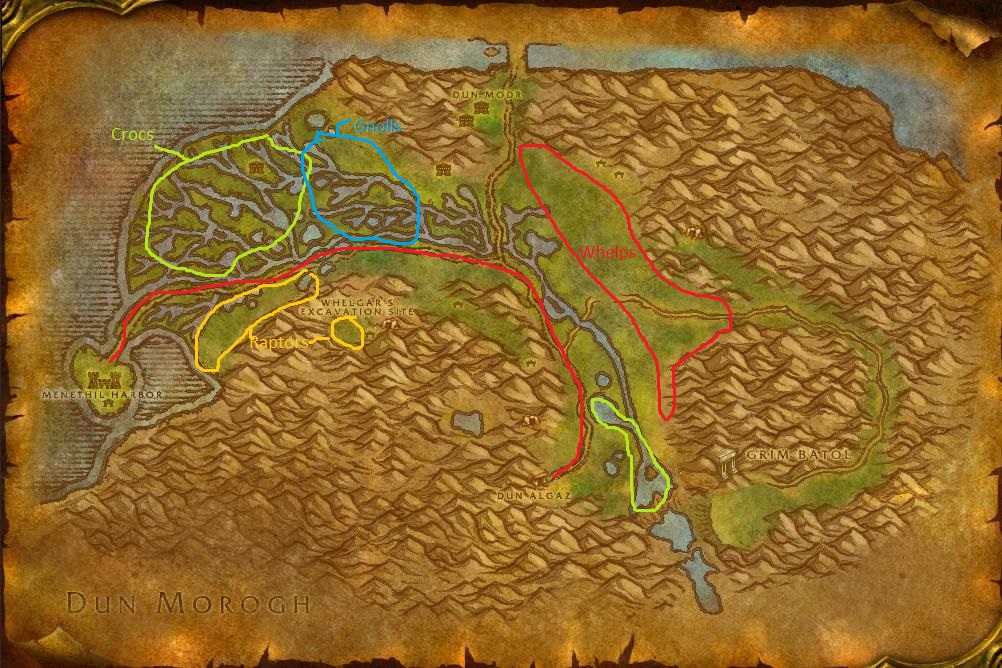 Horde characters have it slightly easier, as the transition from Northern to Southern Barrens is an easier one. Just skin the beasts around Camp Taurajo and the surrounding areas until you are at least 125 in skinning – and don’t even think about taking the great lift down to Thousand Needles. You’re not there yet. 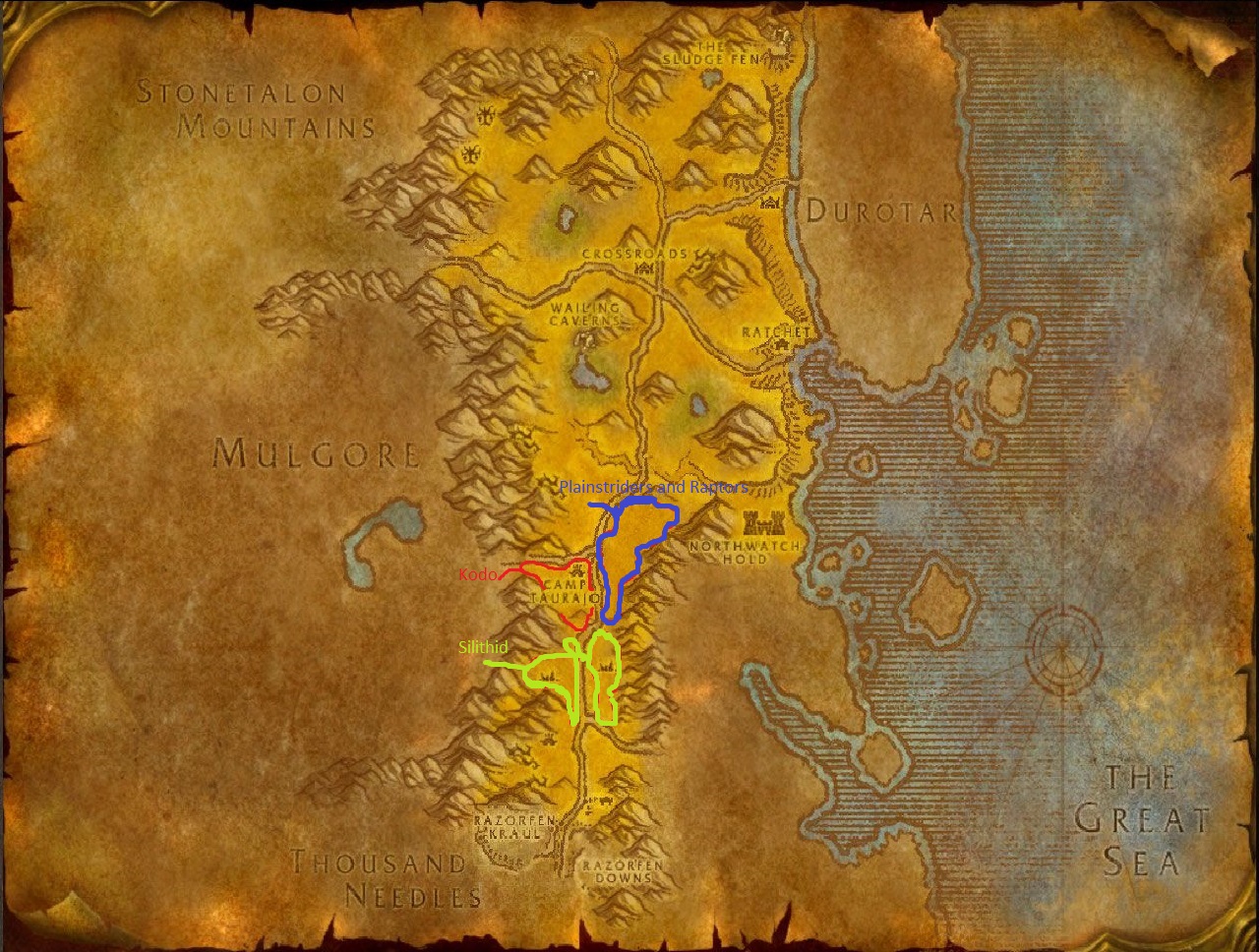 At this point, both factions now follow the same leveling path. Their journeys converge at Hillsbrad Foothills. You’ll want to skin the lions and bears found around the entire zone, so search around. Keep skinning until 150, then go learn expert skinning from your trainer! 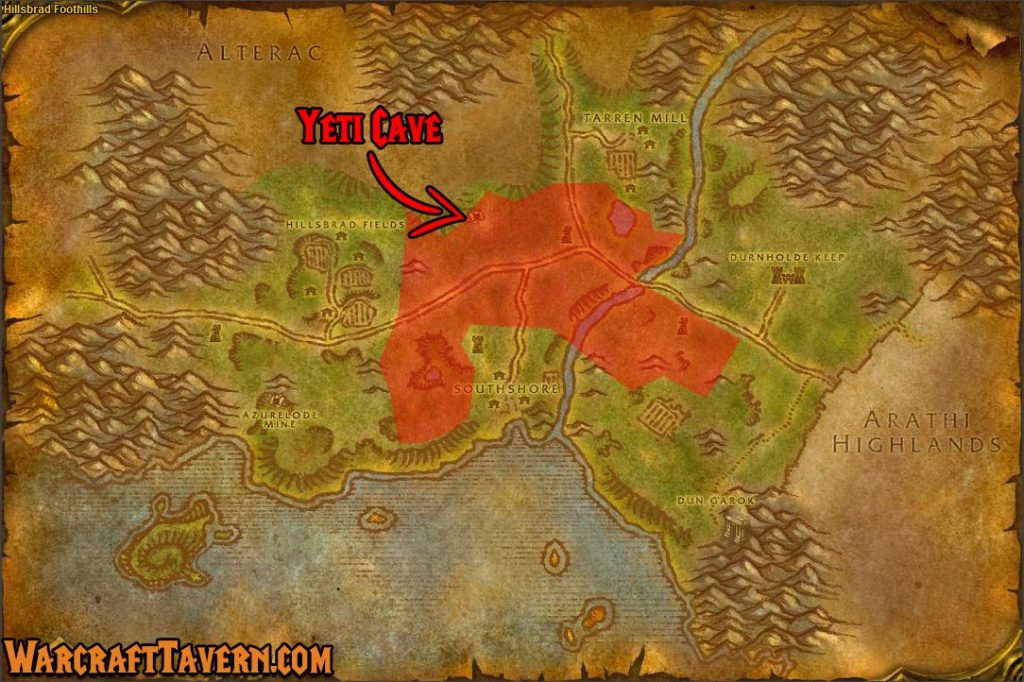 You’re now halfway to 300! And to make things even sweeter, you have just three zones left to visit! For your next task, you’ll want to head to the northern part of Hillsbrad Foothills. Once you’ve reached Alterac Mountains, you’ll know you’re in the right place. Feel free to go crazy on the cave yetis and skin them until you reach 175.

Keep slicing away at the yetis in Alterac Mountains. Don’t be afraid to kill any mountain lions you run into as well. You can also go after the higher level mountain lions and make a circle through the yetis outside of the cave that are further north. 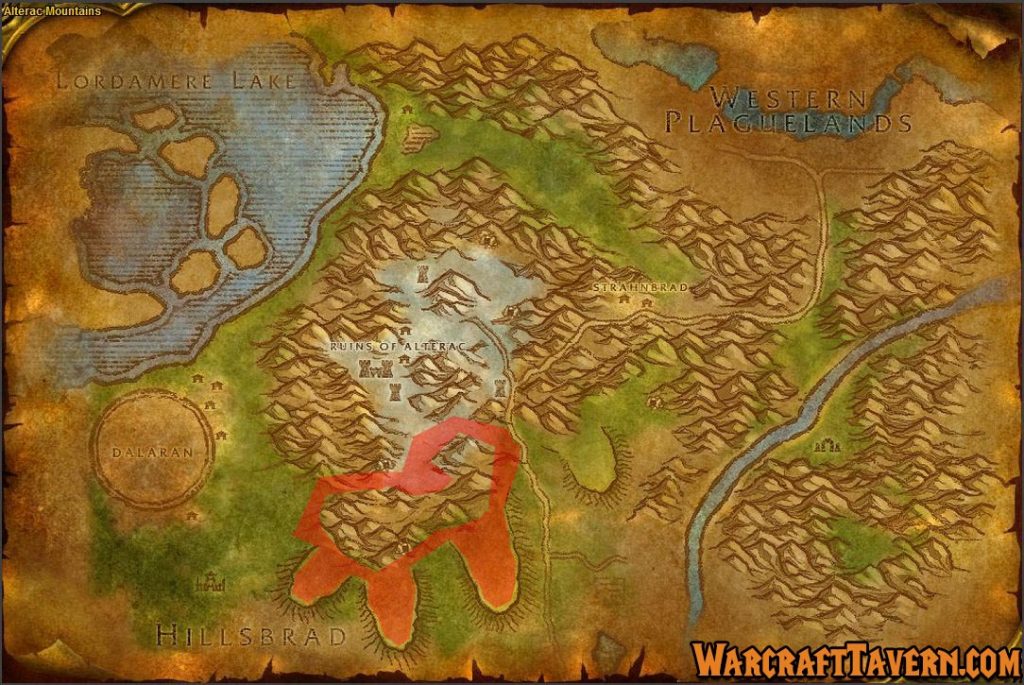 Once you’ve hit 200 skinning, you’ll experience another change of scenery. To save time, make sure you visit your trainer in a major city to learn artisan skinning. This will let you reach the max level of 300! Make your way to The Hinterlands and start from the west side of the zone as the beasts become higher level the further east you travel.

For best results, we recommend staying in Alterac Moutains until level 210 in skinning. 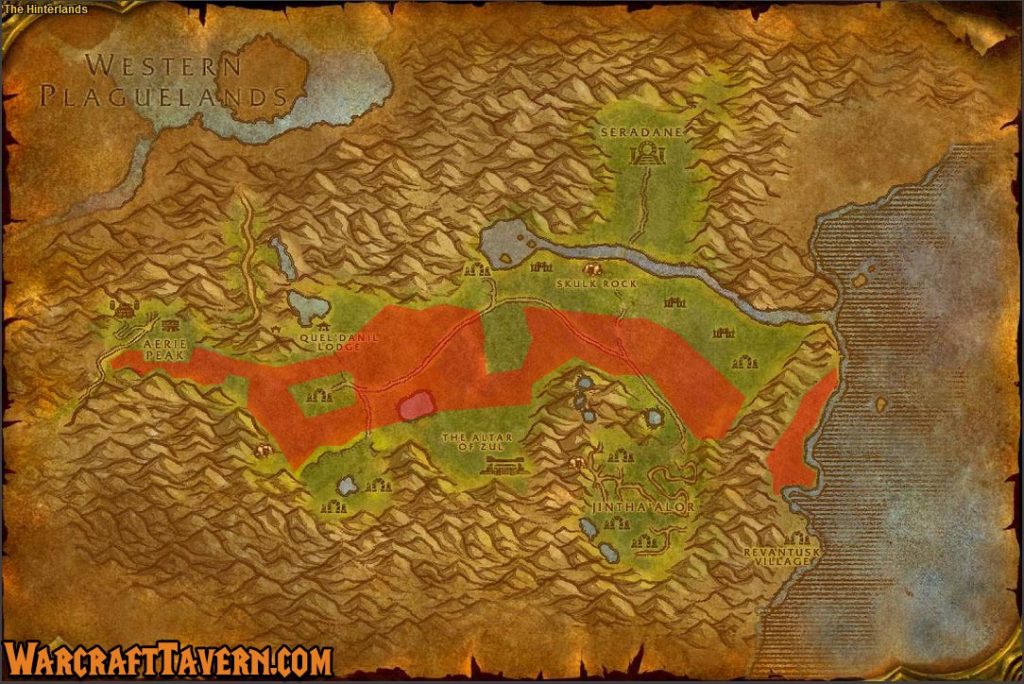 Keep at the grind in The Hinterlands. At this point you can stay up top to kill wolves and Owlbeasts, you can also skin any gryphons you find up there. You can also head to the beach on the east side of the zone and skin turtles. Skin any variety until you’re at least 250 skinning level.

Now that you’re 250 in skinning, you’re ready to reach your final destination! There isn’t a more fitting zone to finish leveling skinning than the dinosaur-infested plains of Un’Goro Crater! For the earlier levels at least, you might want to stick to the east and west edges of the map to kill pterrordaxes. Alternatively, you can slay any variety of dinosaurs in the southwestern quadrant of the map.

Once you’ve hit 275 skinning, you’ll be able to skin just about every monster you’ll run into while in Un’goro Crater. Kill anything around your level and skin it! Repeat the process until you’ve earned a brand new level 300 skinning skill! Enjoy the profits! 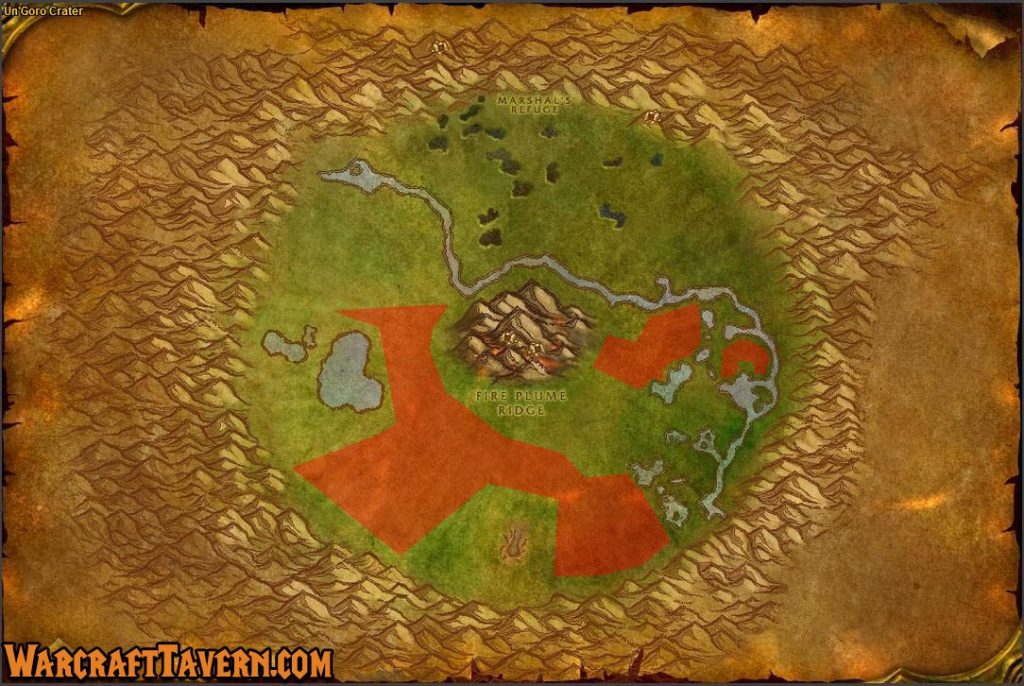 Here are some special types of leather:

There are also some monsters, usually raid bosses, that can be skinned, but do require a skinning level higher than 300. While 300 is technically the skill level cap, there are items and an enchant you can use to boost your level above 300, which will allow you to skin these monsters.

Here are the ways to boost your skinning above 300:

All of these boosts do stack, and you’ll need at least 2 of the 3 to skin Onyxia. You’ll need to equip either weapon in order to benefit from the skinning boost.

Here are the monsters and corresponding leather material that require skinning above 300:

Onyxia, Onyxia’s Lair – Scale of Onyxia: 315 Skinning – Used to craft the Onyxia Scale Cloak, which protects you from Shadow Flame.

Lol you need atleast 105 skinning for hillsbrad foothill.. wasted my time there searching for beast which require 100 skinning but there are none..

Thanks for catching this – it’s kind of a problem, right? Sorry you ran all over the place with it, but very grateful for your input. Thanks again.

This is nothing but a huge waste of time.. im looking for a half hour on the site ALL I WANT TO KNOW IS WHERE THE TRAINER IS LOCATED FOR WHICH SKILL LEVEL

The world does not revolve around to just your needs. I think I am just wasting my time responding to this nonsensical comment.

You wasted your time lmao