Welcome to our assassination rogue guide for WoW Classic! Rogues are one of the pure damage-dealing classes, meaning each specialization is only designed for DPS. Assassination rogues are less common than combat rogues, but they can pack a mean punch if you have enough crit rating. Despite serving only one role, rogues have quite a lot of flexibility and complexity to their class.

We’ll do our best to simplify that in this guide! We’ll cover the setup of your character, including the best races available and what talent builds will serve you best. After that, we’ll fully cover optimization. This includes your stat priorities, professions, the best enchants to use, and consumables to give you an added edge. To cap things off, we’ll explain your rotation and how you can play to best benefit the rest of your raid group!

If you want to play as a rogue, you have several choices for race. You can play as horde or alliance, both having a clear favorite for offering the most advantages. For a better idea of what each race offers for an assassination rogue, check out all the racial abilities offered here. Otherwise keep reading for a breakdown of each faction!

The talents you ultimately decide on will vary depending upon what weapon type you use. If you’re using daggers, Backstab becomes a crucial part of your rotation and thus benefits from different talents. Alternatively, swords eliminate the use of Backstab, so you can reapply those talents to more useful locations. 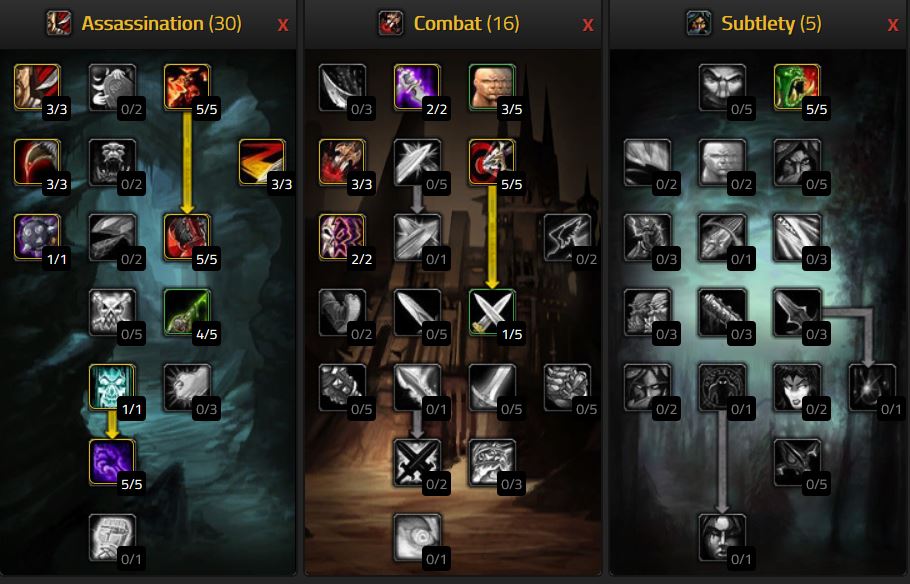 If you want to use daggers, then you’ll want to use a 30/16/5 build. You’ll notice that you don’t pick up Vigor, as 10 extra energy just isn’t useful. You instead pick up a point in Dual Wield Specialization and 5 points in Opportunity in the subtlety tree. Combined with 3 points in Improved Backstab, this is the optimal Backstab assassination dagger rogue build. 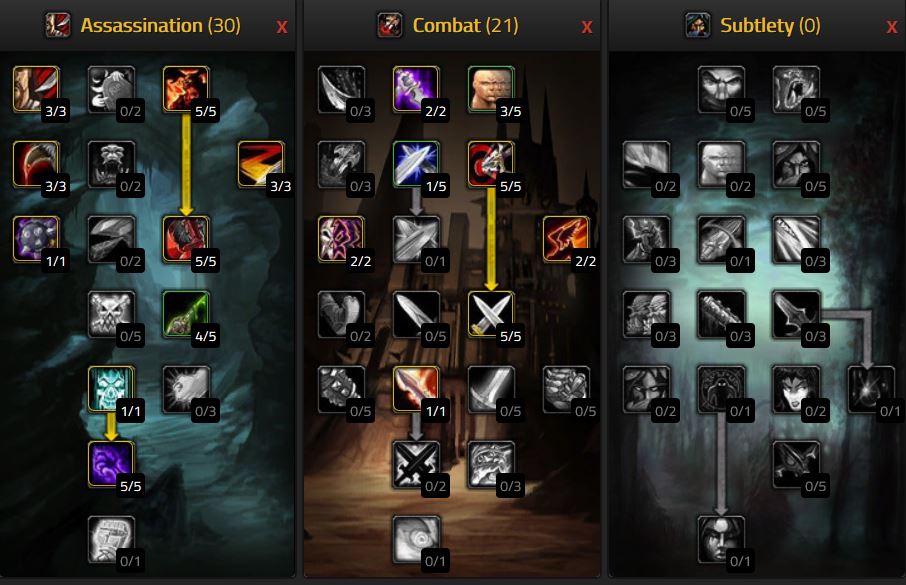 If you want to use swords, you’ll actually free up 8 whole talent points as you won’t ever use Backstab to benefit from Improved Backstab or Opportunity. This allows you to put a full 5 points in Dual Wield Specialization, while also picking up the important Blade Flurry cooldown. Blade Flurry boosts your attack speed by 20% for 15 seconds, while also making all abilities cleave. This is absolutely lethal in combination with orc or troll racial abilities.

Before you even think about raiding, you’ll need to go about the tedious process of optimizing. This will cost you a lot of time and gold, but it’ll be well worth it when you see how much more damage you deal. Failing to optimize your character often shows a lack of investment, which won’t get you invited back to raids! Take the time to optimize so you can perform better for yourself and your raid group.

Because assassination rogues are pure damage dealers, their main focus is on stats that boost their raw damage output. They do attack with melee weapons, meaning that you will need to cap your hit rating. Outside of that, assassination rogues have a slightly different priority than combat rogues due to the Seal Fate talent, making critical strike rating very important.

Here are the stat priorities for an assassination rogue:

Seeing that assassination rogues attack with melee weapons, they’ll also need to max out the weapon skill of whatever weapon they choose to use. If you’re a human, you should definitely be using swords to take advantage of the racial passive. Weapon skill is crucial for avoiding glancing blows, which severely reduce the damage of your attacks.

Every weapon skill level up will also grant:

If you’re really concerned about maximizing your damage, then you’ll also need to pick the right professions. The default choice for any class that doesn’t necessarily require professions is engineering, and that is no different for a rogue! You can also benefit from leatherworking for an easier time gearing before you enter raids. Pick whichever is more important to how you plan to play!

There aren’t any better professions than these for an assassination rogue:

Another important part of making sure you deal the most damage is collecting a long list of enchants. These will go a long way for boosting your overall attack power, so you’ll definitely feel the damage increase when you manage to obtain them. As many of these enchants are quite expensive, consider using cheaper alternatives until you find epic pieces you plan on keeping.

You’ll do the most damage with these enchants as an assassination rogue:

Rogues have a unique list of consumables considering that they need their own materials for specific abilities. In addition to those, they’ll need a standard set of consumables consisting of an elixir, food, and juju. Consumables are less impactful for rogues, but you should still collect them for added bonuses.

You won’t want to skip out on these consumables as an assassination rogue:

Whether you decide to use daggers or swords, assassination rogues are quite deadly once you have enough crit rating. Thanks to the Seal Fate talent, you can gain 2 combo points every time a combo-point-generating ability critically strikes. With high enough crit rating, you can rely on this enough to consistently need just 3 or 4 abilities to max out your combo points, meaning more Eviscerate casts.

Here are some helpful tips to getting the most out of your assassination rogue:

The rotation for a rogue may seem overwhelming considering the number of abilities available, but you won’t use many of them in a raid setting. The basic theory behind rogue damage involves building combo points by spending energy, then consuming those combo points with a finishing ability.

While you do this, you’ll also want to maintain Slice and Dice. This does last just over 30 seconds with 3 points in the Improved Slice and Dice talent, so you’ll have time for plenty of Eviscerate in between.