Welcome to our fire mage guide for WoW Classic! Frost mages are the most common variety you’ll find in Azeroth, but fire mages are also quite potent (as long as you aren’t in Molten Core or Blackwing Lair!). The fire specialization has more depth than frost, requiring you to pay close attention to your rotation throughout the duration of a raid encounter. This makes fire mages an exceptionally fun specialization to play, but it does come with a higher skill requirement than frost.

To properly raid as a fire mage, there are several things you’ll want to know. Fortunately, this guide will cover all of them! We’ll start with race and talent options, then dig deep into every way you can optimize your fire mage. From enchants and consumables to professions and stat priorities, we’ve got the important details for you! To complete your learning, we’ll finish off with some gameplay tips and the rotation you should follow to pump out the damage!

Mages have some flexibility when it comes to choosing a race. Both the alliance and horde have two races that are eligible to play as mage. Despite this, there is a superior choice for both factions thanks to racial passives and abilities. Gnomes and trolls will always be the best choice regardless of what specialization you can play. These races will provide you with the largest damage bonus, giving you an incentive to choose them over the other two options. If you’re curious what other races offer, check them out here!

When it comes to picking your talents, you don’t have much flexibility as a fire mage. You’ll want to go deep into the fire tree, but you’ll spend most of the rest of your points in the arcane tree. Considering you’ll primarily cast fire spells, most talents in the arcane and frost tree aren’t useful for a fire mage. There are still a few that help, so you’re best suited with a 17/31/3 talent tree build. 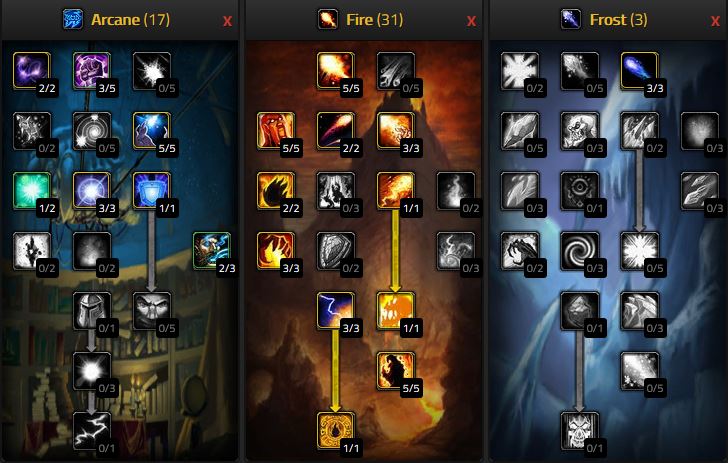 With the 17/31/3 build you have every important talent needed to play as a fire mage. You’ll notice 3 points in the frost tree for Elemental Precision, critical for helping reduce your spell hit rating requirement. Your biggest option here is between Improved Fire Blast and Improved Flamestrike. Both are useful, but Improved Flamestrike is better for area-of-effect-heavy fights. The arcane tree allows you 2 points in Arcane Meditation, which gives 10% mana regeneration while in combat, crucial for helping you keep your mana up.

After you’ve hit level 60, your journey has just begun. Now that you’ve got a max level fire mage with all the right talents, you’ll need to optimize your character to do the most damage possible. To do this, you’ll need to understand your role as a fire mage: pure damage! This means you want anything and everything that boosts the power of your fire spells, and fortunately there’s plenty of ways to do just that!

You won’t get very far unless you understand your stat priorities. All of the attributes on this list can help you deal more damage, either directly or indirectly. What separates them all is just how effective they are at helping you deal more damage. Like most other spellcasters, fire mages want to prioritize boosting the power of their spells, then supplementing that with forms of mana regeneration.

This is how you’ll want to prioritize stats as a fire mage:

You’re also going to want to pick up a few professions to make you more capable. Some professions definitely can boost your damage, but most are supplemental and indirectly help you deal damage. Professions can be used to help you craft gear to make you stronger, but they’re also great for generating gold. With enough gold, you can buy just about anything, meaning professions are power.

These are the best professions to have as a fire mage:

Enchants are often one of the best sources of increasing your damage. With several different equipment slots to enchant, there are several bonuses you can grab that will quickly add up. Many enchants are focused on increasing your spell damage, but you can also find some hit chance and mana regeneration. All of these help you do more DPS, so each enchant is worth picking up!

Collecting these enchants will significantly boost your power as a fire mage:

Finally, you’ll need plenty of consumables to really succeed as a fire mage. Professions and enchants are great, but you can gain a staggering 221 extra spell power from consumables alone! When you throw in your mana potions and mana regeneration goodies, you’ve got everything you need to sustainably set your enemies ablaze!

Don’t get caught without these consumables as a fire mage:

To successfully raid as a fire mage, it is important to know when your specialization is appropriate to use. Somewhere you should never bring a fire mage is Molten Core and Blackwing Lair, as nearly every enemy in both raids is resistant to fire damage. You absolutely can deal more damage than a frost mage, but your rotation is far tougher than spamming Frostbolt. This gives the fire specialization a lower skill floor than frost, but a higher skill cap. This means that fire has more potential than the other two specializations and is lethal in the hands of a talented damage-dealer.

Here are some gameplay tips for a fire mage:

The best part about playing a fire mage is a fun rotation! Frost mages are quite simple, considering you only use one spell throughout most of the fight. Some players prefer this style of rotation, but if you’re interested in something requiring more of your attention and focus, a fire mage just might be your cup of tea.

If you’re just fighting a single enemy, your first priority will be to cast Scorch until you have 5 vulnerability stacks applied. After this, you’ll want to cast Pyroblast so you can apply your strongest version of Ignite and apply the Pyroblast damage-over-time tick. After this, you can switch to spamming Fireball, but you’ll actually be better off using Fire Blast first.

While Fire Blast deals less damage, it is an instant cast with a cooldown, meaning it can deal more damage for the time you’re spending to cast it versus a Fireball. At this point, you’ll continue to use Fireball until your Improved Scorch or Pyroblast damage-over-time tick falls off, using Fire Blast whenever it is convenient. This works out best when you need to move, considering every other spell requires you to stand still.

If you’re facing multiple enemies, you’ll get to make use of one of your special fire-exclusive talents! You’ll start the fight off with Flamestrike to apply the damage-over-time tick, then immediately get in close so you can get maximum effectiveness from Blast Wave! After this, you’ll spam Arcane Explosion until your Flamestrike DoT falls off!

I’m not sure about that mid-fight Pyroblast ._.

You actually do not want to reach Hitcap at first. Especially if you don’t have some 100 sp and crit. Every 1% Hit chance gives you 1.1-1.0% dmg increase as a mage. Early on you’re better off by simply stacking sp. The first +hit items that’ll be good are from zg and bwl.

Since when does an Int scroll stack with AI buff?

I know this is an ancient post, but back in Vanilla all the int buffs stacked. You could use a scroll of Int, and Int Elixer and have Arcane Int, but that hasn’t been true in nearly 15 years