At level 39, Mages are among the most devastating damage dealers in the entire game of World of Warcraft.  Their ability to throw damage at a distance is surpassed occasionally by Hunters, who are able to also do damage at greater range.   For PvP, the best course is for a Frost Mage, focusing on Crowd Control (CC). A Mage speced for fire can do a lot more damage than one who is not, but one speced for frost is one of the most devastating CC classes in the game, just because of the sheer number of ways in which they can hinder movement.

While still possessing the Polymorph, as all Mages do, Frost Mages also have a number of talents that make some of their CC Frost spells far more effective.  They also have access to Ice Armor since level 30 and so are more durable and survivable.

Mages gain access to their teleport to Darnassus and Thunder Bluff at level 30, making travel to and from Kalimdor much easier.

While not having as many choices for races as some other classes do, Mages have more of a balance in their roster.  Each faction has two races, one of which is great for PvP and the other which is sort of so-so, but all are definitely viable.

You are going to want to select your race very carefully, as you will be stuck with whatever race you choose for the life of your character.  So read the following entries carefully, and weigh the benefits of the traits each race offers based on its usefulness and merits.

Unlike a lot of other classes in WoW, there is a clear winner for Mages when it comes to race and that is the Gnome.  There’s just too many benefits here to ignore, and some of them offer bonuses that you just can’t find in other aspects of the game.  If you’re Main is a Hordie, then go for the Undead, because in PvP, escape from CC trumps almost anything.

Seriously though, if you want to play a sexy troll, go for it.  It is a videogame, after all.

While Engineering is a necessity, you’re other Profession is also important.  Which ones you’ll be interested in will largely depend on your class.

What follows is a description of each of the Professions that should be of interest to a level 39 Twink Mage and why.

The Major Recombobulator is especially useful for countering the Crowd Control (CC) effects of Polymorph, while also doling them out.  You’ll be the one that saved the day if you carry the Goblin Jumper Cables XL and can rez the Healer when your whole team gets ganked.  Other items of note are the  Alarm-O-Bot, which can help in detecting Rogues and Feral Druids and the Dark Iron Bomb, which is the absolute best bomb in early Classic WoW, with the most damage and longest CC duration.  There are also three energy reflectors; Gyrofreeze Ice Reflector, Hyper-Radiant Flame Reflector and Ultra-Flash Shadow Reflector, which all reflect their type of damage for 5 seconds.  This is extremely useful and can quickly turn the tables on any caster in the game.  Finally, there is the Arcane Bomb, which absorbs mana and does half of what is absorbed as damage to anyone in range.

Casters in particular benefit from Engineering, as they still have access to Spellpower Goggles Xtreme Plus, as they did in the last bracket, which is still a contender for BiS head slot item, but can also acquire the Green Lens, which is better.  They can also gain use from Catseye Ultra Goggles , especially humans with their perception trait.

All of these items are incredibly useful in PvP and are the best engineering has to offer at this level.  Not to mention all of the fun fireworks and pet companions you can make.

Enchanting is probably the best choice for players who are not supporting their Twink with another character.  It has few expensive reagents that must be truly gathered, most being products of disenchanting items you are already likely to pick up.  It also offers lucrative selling opportunities with the many materials you will acquire from breaking down all of the Green and Blue items you do not need.  It can also offset the cost of getting your own enchantments some, as higher level enchanters are sometimes on the lookout for lower level materials.  Not to mention that at this level, if you can acquire the recipes and mats, you can max out enchanting to 300 and perform the enchant yourself.

The only other professions even worth considering are Tailoring and Mining.  Tailoring for obvious leveling and Pre BiS gear and Mining as a means to support Engineering.  Everything else is a waste of time and energy.

Another use for for Alchemy, Leatherworking and Tailoring is to sell the various high level components and transmutes that only these Professions can craft.  Alchemists can transmute metals with recipes like Recipe: Transmute Arcanite, Leatherworkers can craft the Cured Rugged Hide and Tailors can use Pattern: Mooncloth to purify Felcloth.

A Mage’s spellbook is full of marvelous and useful spells that range from being able to transport one’s self to another location somewhere else in the world instantaneously, to being able to conjure muffins and spring water out of thin air.  All of the Mage’s spells can be broken down into three groups:  Fire, Frost and Arcane.  Fire and Frost are largely those spells that burn, or freeze, obviously, but there are some exceptions.  Arcane spells, while sometimes the damaging type, are more often of a practical and utilitarian nature.  These are all of the spells available to a Mage of level 39.

You’re main advantage in PvP, over pure damage, is CC and keeping your enemies off balance and at bay, so that your allies can move in for the kill.  Use Frostbolt liberally, as it is the simplest method of doing this and with talents, very effective.  Always look for opportunities to use Polymorph and Frost Nova, or anything else that can hinder your foes.  Even fire spells like Blast Wave.

In PvP Frost Mages absolutely overwhelm, not because of the massive amounts of damage they do, though there damage is nothing to ignore at all, but their ability to control the movement and cadence of a fight.  CC is where PvP Mages are the most valuable and to get the best CC that the Mage has to offer, one need look no further than the Frost Talent Tree.  Polymorph is very exacting, but frost has so many ways to slow, or stop enemies in their tracks, it’s almost foolhardy to do any other build.

This spec excels at CCing and bursting frozen targets. Ice Block is good if you are carrying the flag in WSG as you can Ice Block out of CC, instantly cancel it using a macro, and then pick up the flag again immediately.  Also, the 2 points you spend here in Elemental Precision translates to 4% spell hit, which is the caster hit cap in pvp. 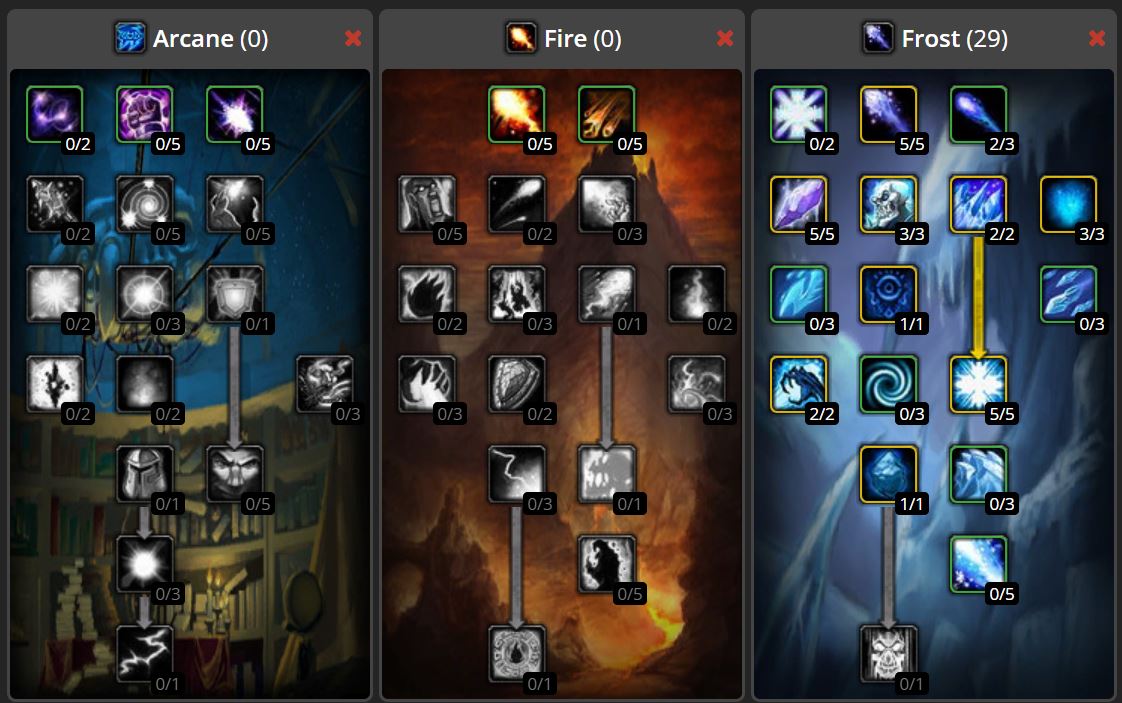 There is a school of thought that raw damage is better than an over taciturn approach and that a Fire Mage build might be better for PvP.  If that’s your thing, check out this spec.  It focuses on raw damage output with a little AoE from Blast Wave. 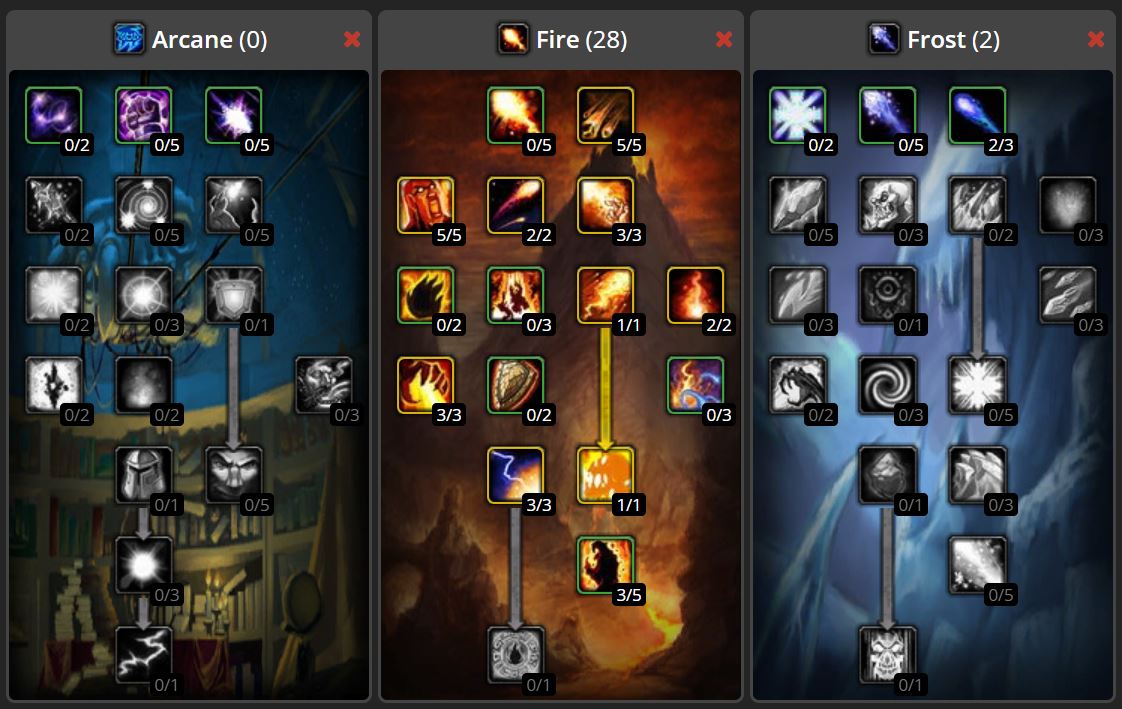 If you want to see what else the Mage’s talents have to offer, check out the mage talent calculator and see what you can come up with.

Remember that only one Battle and one Guardian Elixir can be active at a time.

Use all of them if you are alone, because they are cheap and why not?

Arcane Intellect should always be on, end of story.  All classes want Power Word: Fortitude and the health it gives.  Mark of the Wild raises all of your stats a little and stacks with most buffs.  Blessing of Kings does kind of the same thing as Mark of the Wild, only a bit better and only for Alliance players.

You made it to the end!  In doing so, have acquired all of the knowledge you require to make the perfect level 39 Twink Mage.  Use this newfound wisdom to bring honor to your name, victory to your allies and woe to your enemies.  Let them taste the cold bight of your Frost, the searing flames of your Fire and the uh…magical…mystery…of your arcane!  Have fun!