Welcome to our subtlety rogue guide for WoW Classic! Of all three damage-oriented specializations a rogue has access to, subtlety is definitely the rarest choice. Subtlety rogues don’t possess the raw damage potential of a combat rogue or assassination rogue, but they offer a significant boost to a raid’s overall melee damage with the use of Hemorrhage. While you may not top the DPS charts as a subtlety rogue, the playstyle is quite unique and fun, making an excellent choice for anyone who wants to play a non-traditional rogue!

This guide will cover the most important aspects of playing a subtlety rogue. This mainly covers everything you need to know about optimizing, including your stats to prioritize, enchants and consumables for added bonuses, and the professions you’ll want to take things to the next level. Nearly every race in the game can be a rogue, so we’ll also break down the best options there and any talent choices you’ll need to be aware of! To help you get the most out of your subtlety rogue, we’ll also cover your rotation and gameplay tips to put out the most damage possible.

While some classes are quite restrictive when it comes to picking a race, rogues are not. All of the alliance races can be a rogue, while only tauren are unable to be a rogue for the horde. Even though most races can play as a rogue, there are some clear favorites for both factions. Racial abilities play a huge role in determining which race is best for a given class, so there’s much more to picking a race than deciding based on which looks the best. Check out all racial abilities here, or take a look at your desired faction below!

Talent choices are more restrictive when it comes to playing a subtlety rogue. Even though a subtlety rogue isn’t designed to pump out the most damage, you’ll still need to select specific talents so your DPS is at least reasonable. Due to the nature of subtlety talents, you’ll need to use daggers to play a subtlety rogue. 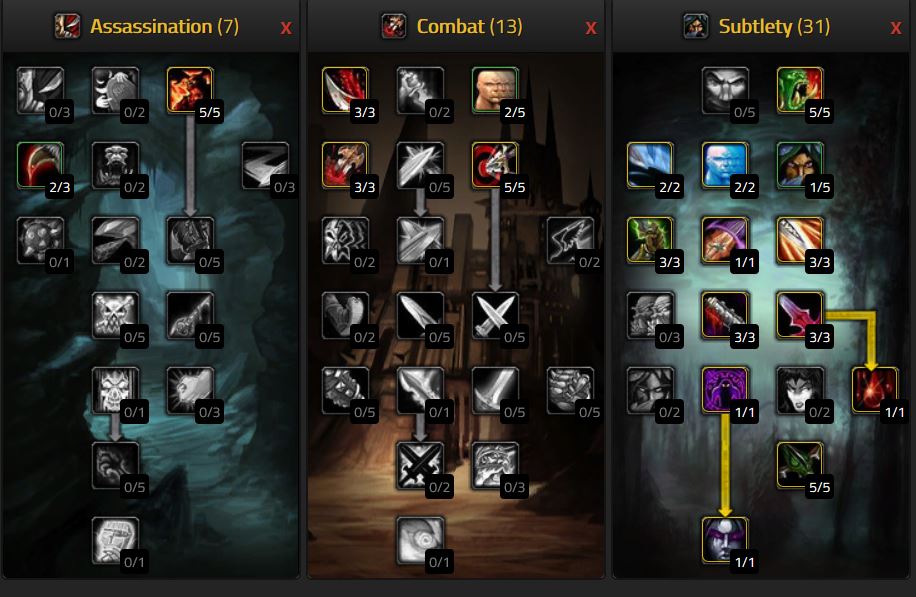 This 7/13/31 build should serve as a great starting point. It goes deep enough in the subtlety tree to pick up all relevant talents, while also making sure to take 3 points in Improved Backstab for extra crit chance and 5 points in Precision to give you a cool 5% hit rating. Most of your flexibility concerns the assassination tree. If you’re flush with hit rating, you can drop some points in Precision and Improved Backstab to pick up Murder, put another point in Ruthlessness, and ultimately take Lethality for a 6% crit damage bonus to Backstab, Ghostly Strike, Hemorrhage, Gouge, and Sinister Strike.

Optimizing is an important part of getting the most out of any character. Despite a slightly different playstyle, most of the theorycrafting behind optimization that applies to assassination and combat rogues also applies to a subtlety rogue. Your focus is still on doing the most damage you can, even though the specialization isn’t the best of the three for doing so.

One of the most important things to understand before you even start to optimize is the priority you should follow in regards to acquiring stats. There are multiple useful stats that can help a rogue deal more damage, but electing to choose one stat over another can result in a significant damage bonus as they all provide different effects.

Use this stat priority for subtlety rogues:

Another thing subtlety rogues need to be aware of is their weapon skill. You’ll be using daggers the entire time you play as subtlety, so you should naturally reach 300 weapon skill in daggers. If you hadn’t done so, you’re vulnerable to land glancing blows on enemies, which severely reduce the damage of an attack. Weapon skill also gives a slight boost to hit rating, so there’s a lot of incentive to maxing your weapon skill.

You’ll want to level your weapon skill for these bonuses each skill level up:

Subtlety rogues benefit the most from these four profession choices:

Optimization just wouldn’t be complete without a nice fat list of enchants for each applicable gear slot. Subtlety rogues have several useful enchants that offer attack power or agility bonuses, both great for directly boosting your damage. Some of these are quite expensive, so don’t worry about them until you have gear you know you’ll be using for a long time.

Your subtlety rogue will be incomplete without these enchants:

Another important part of your subtlety rogue repertoire is a nice collection of consumables for raid night. You won’t need as much as tanks or healers, but you will require the use of rogue-exclusive poisons. Considering how lax your consumable requirements are, there’s no reason to neglect them and deprive your raid of extra damage.

Subtlety rogues benefit the most from these consumables:

Subtlety rogues are quite a unique class to play as. Their Hemorrhage ability is very useful for boosting melee damage, but it does take up one of the 16 debuff slots. This means that you probably won’t get to play as subtlety unless you’re part of a melee-heavy raid. There are several useful debuffs that offer more than a hemo build, but that doesn’t mean a raid group using Hemorrhage is incapable of clearing any content in the game!

Here are some gameplay tips for a subtlety rogue:

One thing that separates a subtlety rogue from the other two specializations is a more-robust rotation. Rather than using just one combo-point generator and alternating between finishers, subtlety rogues will need to keep Hemorrhage applied in addition to their regular rotation. They also make great use of stealth abilities, creating the biggest splash when you choose to open with Ambush.

Considering that Hemorrhage is the biggest reason why a subtlety rogue would be brought to raid, keeping this applied is your top priority. It lasts 30 charges, which can go fairly quick in a 40 man raid environment. After applying Hemorrhage, you’ll want to use Ghostly Strike as it is more energy-efficient than Backstab and has a 20 second cooldown.

You’ll then need to weave between keeping Hemorrhage applied and using Backstab for more damage. Typically you’ll alternate, but you may have opportunities to use two casts of Backstab in between Hemorrhage applications. When you’re maxed out on combo points, you apply Slice and Dice if it isn’t already active, or use Eviscerate for pure damage.

It’s important to remember that Gift of Arthas (item) is deemed more beneficial than Hemo. However, a sub rogue can still remain useful thanks to Imp. Expose Armor, which is a very good debuff. Also, you should mention the temporary weapon enchant: “Shadow Oil”, which will deal more damage than Poisons if you get the proper consumables.

Happy to answer any more questions!