Welcome to our WoW Classic leveling guide for warriors! The tough and mighty warrior certainly makes for one of the strongest late-game classes for damage or tanking, but it balances out with a fairly weak leveling experience. If you’re feeling frustrated trying to level a warrior, have faith that it does get better, and that all your suffering is forging you into a smarter, better warrior player!

Leveling a warrior is fairly different from playing a max-level warrior. For starters, you’ll use a completely different talent specialization and your stat priorities are quite wonky. As a max-level warrior, your primary focus is dealing damage, but you also need to keep an eye on your health, survivability, and overall well being when you’re leveling.

To keep up with the challenge a warrior demands, there are several important things you want to know! This guide will cover some generalized leveling tips, but we’ll also go in depth on how you want to progress as a warrior, including your talent path, ability training schedule, class quests, and even how you should prioritize stats! We’ll also give you some helpful tips and tricks to make the leveling process just a little bit easier!

No matter what class you want to play, there are some best practices you can follow to make the experience more enjoyable and quicker overall. Leveling in WoW Classic is all about the journey and gradual progression of your character. If you’re not having a fun time on your way to level 60, then you’ll view leveling as a chore. This begins with ensuring you’re picking the right class that suits your personality and desired playstyle, so make sure a close-and-comfy warrior is the right class for you.

On top of making sure you enjoy every moment you spend in Azeroth, you’ll also want to:

Taking the time to level professions while you level will slow your progress, but they can significantly improve your quality of life. You’re free to pick all of the secondary professions (fishing, cooking, and first aid), but you can only have two primary professions. Which you should choose will ultimately depend on what your goals are. Do you only want to make gold, or would you like a professions that can craft useful equipment for your character?

Here are some great professions to train while leveling a warrior:

Your rotation is going to change depending upon what level you are, as several key abilities require you to reach certain levels to train them. With that in mind, simply drop whatever abilities you don’t have yet from the rotation, but add them in when you’re high enough level to use them.

Your top priority will always be to keep Battle Shout applied for the attack power bonus. On single targets, if your target is at 20% or lower health, you’ll want to prioritize Execute for the biggest damage. If your target is above 20% health, then your priority becomes to use Overpower upon dodging an attack.

Overpower does require you to dodge though, which does make it unreliable to fit into your rotation. Use it whenever it is available, otherwise use Mortal Strike on cooldown. If Execute and Overpower are both unavailable and Mortal Strike is on cooldown, you can cast Whirlwind. After that, spend any excess rage on Heroic Strike.

Your rotation becomes a little different with multiple targets. Instead of using Execute right away, you’ll cast Sweeping Strikes for your abilities to hit an additional enemy. Then you’ll actually use Whirlwind right after, followed up by Execute if your target is low enough.

If both abilities are unavailable, use Overpower if you’ve dodged an attack. In the event you don’t dodge, you’ll then use Mortal Strike instead. If you have any spare rage at this point, you can dump it all into Heroic Strike. 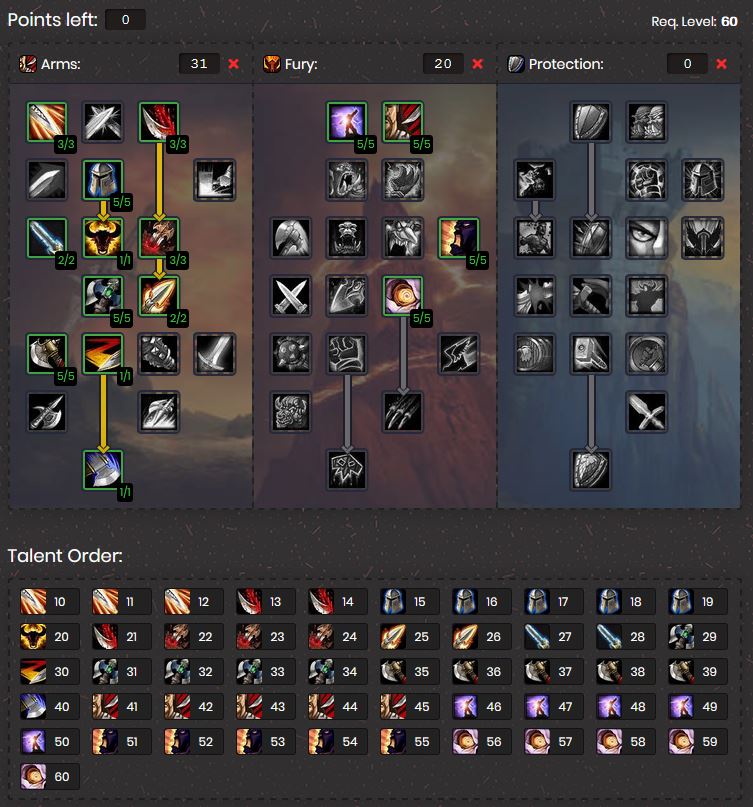 Despite fury being the better end-game damage specialization, arms is much better for leveling thanks to reliable rage generation and damage output. Your goal is to max out the arms tree to pick up Mortal Strike, after which leveling definitely becomes easier.

Charge / Intercept – Puts you into Battle / Berserker Stance depending on whether you’re in combat, and you can cast it again to use the correct dash spell.

Stance Juggling – Switches between all of your stances. It alternates between defensive stance and battle stance, and switches to berserker if you control click it.

Anyways, you should always consider the dps increase from attack power AND crit % when evaluating gear upgrades, warrior is the most gear dependant class in the game so you want to get the best gear possible. There can be a lot of math involved in determining which item is better, deal with it or go play an easier class like Rogue… be prepared to farm a lot of gold too because many upgrades are BOE items that you will be purchasing on the AH (mining/herbalism helps a lot).

Notable AH items for lv40-43 that will skyrocket your damage:
– Excecutioner’s Cleaver -> first real upgrade for your whirlwind axe, the next upgrade is at least lv54 (Destiny is nice but its not better, just different)
* Kang the decapitator is nice too, but not directly better. str and +1% hit is really valuable.
– Plated fist of hakoo -> best gloves until lv 52+
– Giantlayer bracers
– Obsidian graves

* Ravager sucks (the 2H axe from Herod), it doesn’t have any stats and you can do more damage using your active abilities than spinning like an idiot.

* With good gear, a proper build (over lv36) and a good rotation you can go to a dungeon as a 2H tank and do half the damage of the entire party, with the other 3 dps classes combined contributing the other half (yes warriors are broken, you just have to play it right).

Now about the talents… arms is great ONLY IF you have sweeping strikes (lv30) and an insane weapon (whirlwind axe), otherwise fury blows arms out of the water in terms of pure dps. The 5% crit from cruelty is simply the best talent in the warrior tree, then you have improved battle shout and enrage, all of them are direct increases to damage. In the meantime arms does absolutely nothing, yes deep wounds -> impale es great but if you dont have crit chance is useless because you are not critting… so no, at low levels fury is better 100% of the time.

Also PLEASE don’t get the staff from wailing caverns, have a little self respect. Get the 1H sword instead and use it with a shield, it really helps at low levels when mobs are dangerous. At lv20 buy a blue 1H off the AH and switch to dual wield, then get the 1H sword from the BFD quest. Only switch to 2H if you can get your hands on a reeeeeally good weapon for your level, because when you don’t have instant attacks (MS or WW) misses/parries/blocks on a slow weapon is cancer.

* The #1 reason people say that warriors are hard or slow to level up is because they don’t know how to play them or spec them or gear them, but when you get it right it will turn your warrior into an unstoppable killing machine.

At lv30+, once you get your whirlwind axe you want to respec to arms because sweeping strikes + whirlwind will do stupid damage, you can double the dps of mages, rogues and other “dps classes” several leveles over you in dungeons. This improves dramatically when you also have axe spec and cruelty for that sweet extra 10% crit.

When switching to arms don’t take improved heroic strike, with 2H you will never use it because you cant afford to lose your main rage generator (white weapon swings) and when you have to constantly activate sweping strikes, mortal strike and whirlwind you really have no rage to spare so its pointless. Take 2 points of parry instead, it will be useful in every single fight and specially when tanking (remember, you can and should tank dungeons).

After you get mortal strike start spending your points in the fury tree to get 5/5 cruelty, 1/1 piercing howl, 4/5 improved battle shout and 5/5 enrage. the other 5 points you can spend as you like depending on your playstile, I personally prefer improved demoralizing shout because I like to tank with 2H weapons in berserker stance and do insane amounts of aggro and dps for fast runs, this way I can farm gear upgrades faster.

PD: Always get piercing howl!! it will save your life! (or your healer’s).

I noticed that cleave is not in any of the rotations at all. Is this correct? Should I stop using it when both tanking and dps ?

Id also like to know the answer to this ay

Hmm, you can use shield bash in battle stance aswell.

Makes me wonder? You start with execute, how is that even possible

The rotation is by order of priority, so if Execute isn’t available because the mob is at greater than 20% health you move onto the next one in the rotation until it is.