Warriors in World of Warcraft are the unmitigated masters of melee combat.  They absolutely excel at both dealing damage to enemies and absorbing the attacks of their foes.  They can use any weapon, save for wands and can wear any armor.  In PvP, while a tanking warrior can do well paired with a good healer in the Arena, an arms speced Warrior with a two-handed weapon often dominates in both Battlegrounds and the Arena, for complete and overwhelming damage output.

This, coupled with their survivability from the highest average HP and ability to wear plate armor, makes Warriors one of the best, if most challenging, choices for Twinking.

The choice of race for just about any character can be a difficult one and for Warriors, the choice is the most difficult, since every race on Azeroth have Warriors in their ranks.  Though, there are a smaller number of them that do well in PvP.  If you’re interested in a more general understanding of all of these races, go ahead and click here to see a more detailed and slightly lore based description of the races in WoW.

Ahead are all listed the races available to Warriors that are good for creating a Twink and the abilities those races possess that help in PvP.

Another slight advantage to playing a gnome is your diminutive size.  Players are not scripted NPCs or monsters that can auto target with impunity and it’s sometimes easy for the average player to lose track of a wily and tenacious gnome.  Use this to your advantage.

While Humans and Nightelves can play Warriors, their racial traits are not as useful in PvP as the Dwarf and Gnome, which is why, if you’re seeking optimization, to stick with the latter choices.

While both Tauren and Trolls are able to play as Warriors and often make very good Warriors, their traits aren’t always optimal for PvP.  For this reason, it is advised that the discerning player choose either Orcs or undead and, for this build, maybe just the Orcs.

In a game like WoW, choosing a profession can be difficult, because there are a lot of them.  The good news is one of the more interesting professions is also absolutely necessary for a Twink Warrior of level 39.  Engineering provides a vast array of useful items and gadgets that you are going to not only want, but need to give you a sizable edge in PvP.

Make no mistake, you need to take Engineering, but your second profession and secondary skills are important too.  Which of the other professions you will choose, is likely a matter of your personal preference, but is also somewhat class dependant.  A Warrior, for instance, has absolutely no use for tailoring.

Here’s a description of all of the Professions in the game that should be of interest to a level 39 Twink Warrior and why.

The Major Recombobulator is especially useful for countering the Crowd Control (CC) effects of Polymorph.  Being the class most likely to survive most engagements, the Warrior will find use in the Goblin Jumper Cables XL, which they can use to raise a fallen comrade, likely the healer.  Other items of note are the Alarm-O-Bot, which can help in detecting Rogues and other Druids and the Dark Iron Bomb, which is the absolute best bomb in early Classic WoW, with the most damage and longest CC duration.  There are also three energy reflectors; Gyrofreeze Ice Reflector, Hyper-Radiant Flame Reflector and Ultra-Flash Shadow Reflector, which all reflect their type of damage for 5 seconds.  This is extremely useful and can quickly turn the tables on any caster in the game.  Finally, there is the Arcane Bomb, which absorbs mana and does half of what is absorbed as damage to anyone in range.

All of these items are incredibly useful in PvP and are the best engineering has to offer at this level.  Don’t forget though, that you still have a ton of other gadgets and googaws from previous brackets and some of these are still quite useful.

For a second profession choice, most players can’t go wrong with Enchanting, especially if they aren’t supported by a higher level toon, though that isn’t advisable.  Enchanting is always lucrative, as players of every level can benefit from the enchantments it provides, not to mention all of the excess materials you can sell on the AH, which often sell for a lot more than the items they are disenchanted from.  It also has no material components that another profession is needed for.  So you can take it with Engineering and be mostly self sufficient.

If you have a supplier for your reagents, then Alchemy may be the way to go.  Being able to craft all of the consumables you will need to get an edge in PvP very quickly pays for itself.  You can also you alchemy to make a little money, as the potions and elixirs you need are needed by others as well.

Another use for for Alchemy is to sell the transmutes that the profession offers with recipes like Recipe: Transmute Arcanite,  They are extremely valuable to the right customer and can earn you some serious pocket change.

To a lesser degree, a Warrior can take up one of the professions far less useful to them, solely for the purposes of earning extra side cash by selling the transmutes that those professions train in.  Leatherworkers for example, can craft the Cured Rugged Hide and Tailors can use Pattern: Mooncloth to purify Felcloth.

Cooking:  The one thing a Twink Warrior wants with cooking is being able to cook more foods that provide the Well Fed Bonus.  At this level, the Spider Sausage is the easiest recipe to acquire that does this and it can be bought from just about any standard Cooking trainer.

Also pick up the Dragonbreath Chili, from Helenia Olden (Alliance) or Ogg’marr (Horde) in Duskwallow Marsh, or Super-Seller 680 in Desolace.  It’s a great little added damage for when you’re surrounded.

The Dragonbreath Chili is of particular use for Warriors who are always in the heart of the melee.  The chili adds a fire attack at intervals that damages everyone in front of you.

First Aid:  At this level, all you’re looking to do is get to the Heavy Runecloth Bandage, which can heal most classes to a significant degree.  Getting to it and being able to craft it is a process that starts with the three books, Expert First Aid – Under Wraps, Manual: Heavy Silk Bandage and Manual: Mageweave Bandage.  Once those are in your possession, it’s just a matter of having the cloth.

Fishing:  At this bracket, fishing isn’t really all that important at all, accept as a means of increasing cooking fast with fish recipes.  Even so, fishing is a good way to pass the time while you wait for a boat, or Zeppelin.

Warriors have some pretty powerful attacks and abilities, especially at this level.  Almost all of a Warriors abilities are in some way offensive in nature and they have very few utility in their repertoire.  The most important thing to remember about playing any Warrior, is that only some of your abilities can be used in all of your stances and many of them can only be used in one or two of them.  Warrior abilities break down into three groups:  Arms, Fury and Protection.  What follows is a short description of all of the abilities from each stance that are of use to a Twink Warrior of level 39.

In PvP, though Warriors do get some traction with defense, their primary role, especially at this level, is damage.  They have a number of ways to do this, so let’s take  look. 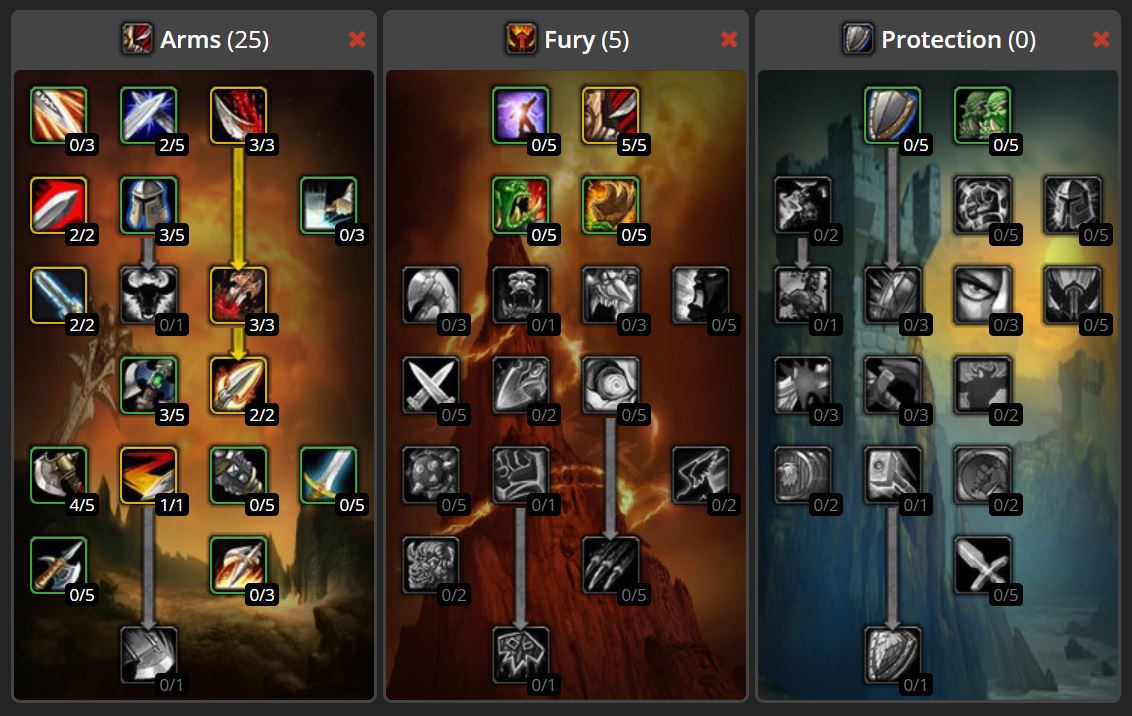 This build increases your efficacy with Slam, which is a staple ability for Warriors.  It’s also centered around getting to the Deathwish ability, which further increases your overall damage and helps counter Fear CC effects at the cost of some protection. 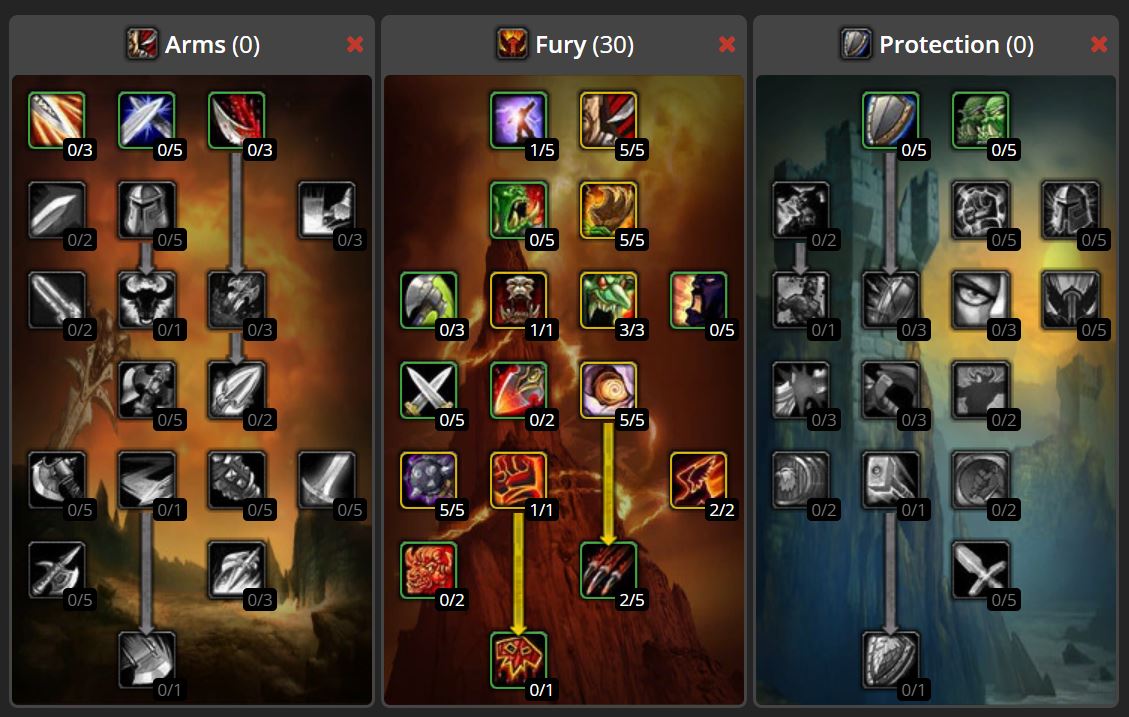 Now this build tries to strike a balance between the arms and fury trees, allowing you to utilize both Improved Charge and Piercing howl, which is a killer combo to drop into a group of enemies.  This is made especially effective with the inclusion of Cruelty and Deep Wounds which still allow for a pretty high critical threshold potential.

Gear is important for all classes and is usually one of the most difficult aspects of building a Twink of any level.  For Warriors in general, it is definitely so, because Warriors are the most gear dependant class.   In PvP, the name of the game for Warriors is DPS in any form you can get it.  So we’ll be focusing on gear that increases Attack Power, Critical Strike, Strength, and Agility (for crit), as well as Stamina to increase survivability.

Acquiring all of this BiS gear won’t be easy and it is advised that you get financial backing from a Main to get the items from the AH, which will make the task much easier.  Listed below are all of your BiS gear slot items and how, or where to get them. Good Luck!

At this level, there are a great many useful consumables to be had.  If you’re an Alchemist, you’ll find getting many of these consumables to be a lot easier.  If not, you can always check the auction house, so get them from other players who are Alchemists.  You can even get some of them from vendors, though their stock is often limited.

Remember that you can only have one Guardian and one Battle Elixir active at a time.

Power Word: Fortitude from the Priest, and the Druid’s Mark of the Wild are the class buffs that are the most useful to you.  If you are Alliance, Blessing of Kings, will also be helpful.  Not to mention all of your own shouts and buffs.

Well, that is everything you need to know about how to build a fantastic level 39 Twink.  The other players in the BGs are rage, brutal, without mercy, but you…you are worse.  Rip and Tear, until it is done!  Have fun!