Welcome to our mage leveling guide for WoW Classic! Mages are the premier spellcasters of Azeroth, using their superior intellectual knowledge to overpower their foes. Not only do they have a variety of frost, fire, and arcane spells, but they also have several special abilities that offer unique utility, like portals and conjured food/water.

One thing that makes leveling a mage slightly different from other classes is that their playstyle is extremely similar to how you’d play at max level. Frost is the most popular leveling and raiding specialization, offering plenty of damage with one of the simplest rotations in the game. The key difference between leveling and raiding is the talents you choose. The talents you’ll select are crucial to helping you level as a mage as they significantly increase your power.

Leveling your mage is fairly simple, but there’s still some good information to know if you want a smoother, stress-free leveling experience. This guide will cover some general leveling tips and will also go in-depth on how to build and play a mage. We’ll cover your stat priority, rotation, optimal talent build path, essential abilities to train, and professions that will make everything a little better!

Getting to level 60 is definitely a long journey in Classic WoW. Much of the beauty in Azeroth is in the sense of gradual progression you feel. Each new level and ability you earn makes you feel a little bit stronger. Every new piece of equipment you find helps too. Simply rushing to max level is great if you’re strictly interested in raiding, but this will cause you to miss out on the beauty of growing your character. Play however feels most fun to you, but definitely consider taking the time to enjoy each moment your character gets just a little bit better!

You certainly won’t need these on a mage, but here are some helpful gameplay tips if you want a smoother ride:

The rotation for leveling your frost mage is extremely simple and won’t change much on the way to level 60. While your rotation is simple, the way you execute it might not be. To be most effective, you’ll constantly need to run away from enemies in between Frostbolt casts. This will allow you to keep them at a distance while also damaging them.

All you really want to do is cast Frostbolt, with the goal of still being out of melee range of your target when the cast finishes. To make kiting simpler, you can also use Frost Nova to freeze enemies in place. As a last resort, when enemies attack you with Ice Armor applied, they’ll be slowed once again, giving you a good window to Blink away.

As soon as you get Ice Barrier, keep it up at all times. This basically serves as a free shield and will prevent enemies from slowing your Frostbolt casts if they do reach you. If you encounter multiple enemies, immediately use Frost Nova and run away to give you a moment to assess the situation.

If there are less than 3 enemies, use your single target rotation after using Polymorph on one. If there are more than 3 that you can confidently handle, use Blizzard until it is no longer hitting your targets. Use Cone of Cold and then run away to channel another Blizzard. Once enemies are attacking you, start spamming Arcane Explosion. 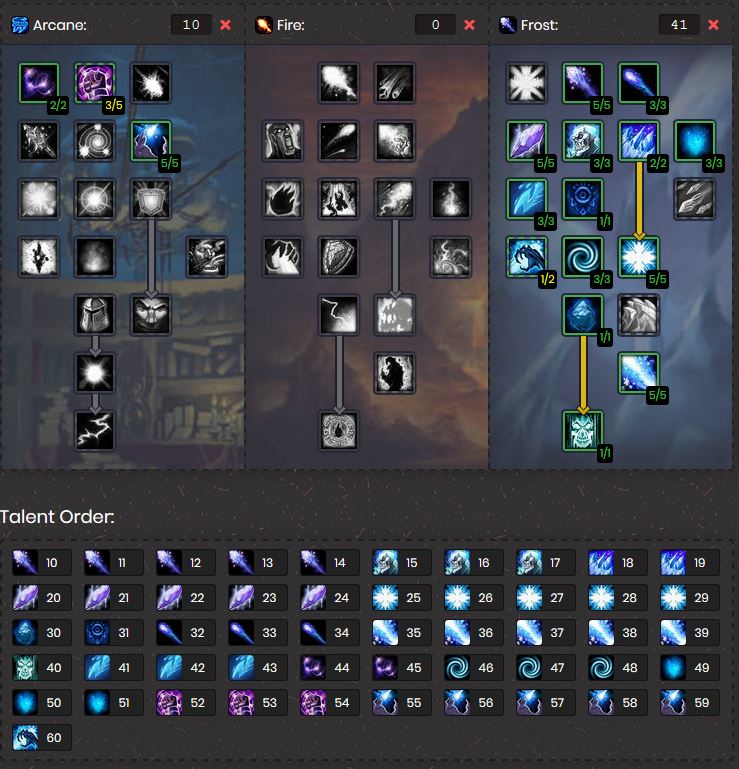 Leveling a mage often comes to choosing between frost and fire, but frost is undoubtedly the stronger choice due to more consistent damage and great survivability. With 3 points in Frostbite and 5 points in Shatter, you’ll have a 15% chance for Frostbolt to freeze your target for 5 seconds. When your target is frozen, you’ll have a 50% increased spell critical strike chance. Combined with 100% increased critical strike damage from 5 points in Ice Shards and it’s easy to see how frost is an effective leveling specialization!

If your only goal is to reach level 60 in the quickest time possible, then professions are only going to slow you down. Having said that, they’re still an excellent way of making leveling more enjoyable. With professions you can make stronger equipment or powerful consumables for your character, or you can also sell them to other players for a great way of farming gold. At some point, you’ll probably want professions, so it’s a great idea to start them while you’re leveling.

Here are some great professions to train while leveling a mage:

Hey Morph, you’re correct! This was supposed to be Cone of Cold Rank 2, which is actually available at level 34, but the guide creator wanted set levels for upgrades. Thanks for catching this typo and helping to improve the guide. Have a wonderful day!

You cannot use Cold Snap to reset Evocation

Thanks for the catch Wriky. I’ve gotten that fixed and updated. Hope you have a wonderful day.

this is very helpful, thank you so much!! so well written and well formatted!