Welcome to our WoW Classic PvE guide for restoration shamans! If you enjoy the lore and feel of a shaman and want to use the class to its full potential, there’s no better specialization for it than restoration. The shaman can only be played by the horde, which makes it similar to the alliance-exclusive paladin class.

Even though both class can heal, they both do so in a very different way. Restoration shamans might not have many spells to cast, but that doesn’t mean there isn’t some theorycrafting that goes into developing a strong rotation! In this guide, we’ll cover everything it takes to be a great restoration shaman. That includes race and talent options, your healing rotation, and important tips to getting the most out your character. We’ll also cover all aspects of optimization, including your stat priorities, profession options, the best enchants to look for, and all the consumables you’ll need to be the absolute best!

Shamans are usually brought to raids for the use of their versatile totems, which directly impact their other four group members. This means that a shaman is also a support class. With the aid of totems and powerful multi-target heals, shamans are best as raid healers. They can double as a tank healer, but this will quickly run them out of mana!

As shamans can only be played by the horde, your race options are limited to tauren, orcs, and trolls. All of these are good choices, but your race option will vary based on which shaman specialization you are trying to play. For restoration in particular, your best choice is definitely a troll. This will allow you access to Berserking, a powerful ability that increases your spell casting speed based on missing health.

While that might not seem thrilling initially, the other options aren’t any better. Caster shamans do not benefit from an orcs Blood Fury, which eliminates that option. Tauren are an alright choice due to extra health from Endurance and the ability for a free heal with War Stomp.

None of the races really stand out as amazing for a restoration shaman. Trolls are only the best they have the only racial ability that is even remotely useful. That means it doesn’t really hurt what race you choose, as they are all fairly close. Trolls have the slight healing edge, while tauren have a slight survivability advantage. Check out all the racial abilities here!

When it comes to picking talents, restoration shamans have less options than it may seem. Outside of Ancestral Knowledge, both the elemental and enhancement trees don’t offer anything of much use to a healing shaman. This makes the use of a “deep” restoration talent tree build much more effective, allowing you to pick up nearly all of the talents that will strengthen a restoration shaman. 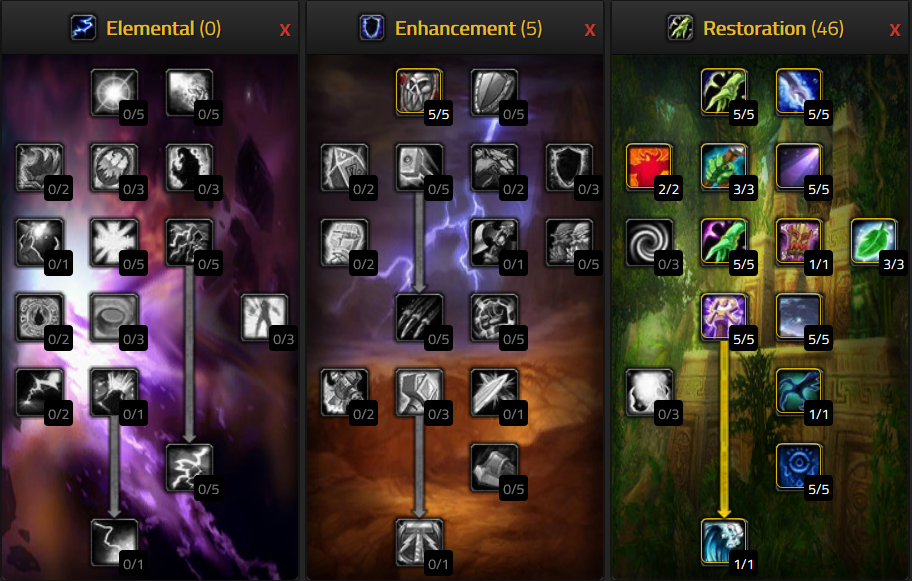 Now you might think it’s crazy to have 46 points in the restoration tree, but there isn’t anywhere else beneficial to put those points. The only thing you’d want to switch on this build is swapping 2 points out of Improved Reincarnation and 1 out of Totemic Mastery to put 3 into Healing Way. This is what allows restoration shamans to be effective as a backup tank healer, but it comes at a high mana cost. This makes Healing Way less important, so avoid it unless you really need to help heal your tank.

When it comes to optimizing, there are two main goals you need to accomplish as a healer. You need to prioritize stats and acquire gear so that your heals restore the most health, while also doing your best to ensure that your mana isn’t depleted. These two goals are often complete opposites to each other, so you’ll need to find a good balance of the two. Most of a restoration shaman’s issues with mana can actually be overcome with optimizing, so this makes it an absolutely valuable step in raid preparation.

Stat priorities for a restoration shaman are similar to the needs of every other healer. Healing power is definitely your best friend, while everything else is there to back it up. Shamans end up wearing leather until level 40, which does mean you might end up using a lot of restoration druid gear as it offers the same stats with less armor. Armor value isn’t as important for a healer, so pick whichever pieces offer you the most of the stats below.

These are the stat priorities for a restoration shaman:

Although your weapon skill isn’t as important for restoration as it is for an enhancement shaman, you’ll still want to take the time out to max out your weapon skill. If you’re assigned to a melee group, you can get in some free auto attacks in between your heal casts. Without a maxed weapon skill, you’ll instead stand there doing nothing!

Each point of weapon skill will give you:

When it comes to picking a profession, the shaman class in particular can benefit from several different choices. But since you’re playing as restoration, which is a healer, you’ll benefit the most from alchemy because of how many potions you’ll end up needing. This will save you plenty of headache when it comes time to farming consumables before raids. Because consumables are so useful for healers, any professions that helps produce those becomes incredibly valuable.

Here are the four best choices of professions as a restoration shaman:

Another great way to optimize your character is with the use of powerful enchants. As a restoration shaman, you’ll primarily want bonuses that offer healing power to allow you to heal more with one cast. There are several you’ll want to have, but failing to collect them is severely gimping your healing potential. The bonuses from enchanting are quite significant, so you’ll definitely feel a difference once you add them.

Here are the most useful enchants to have as a restoration shaman:

Last, but certainly not least on the list for optimizing, is consumables. Many people groan when it comes to discussing consumables, but the time or gold spent to acquire them is definitely worth it. Consumables will grant you a larger mana pool, quicker mana regeneration, and plenty of instant mana boosts in the form of potions and runes. Because managing mana is such a critical part of healing, anything that helps in that department is worth its weight in gold, literally.

Here are all of the consumables you’ll want to help boost your restoration shaman:

As a restoration shaman, you have several things that you’ll need to be aware of when actually playing. You’ll need to understand the utility you bring to the raid as a shaman, what role you serve as a healer, and the rotation you’ll want to follow to maximize your usefulness!

Because a large part of the restoration shaman rotation involves repeatedly using Chain Heal, you can quickly run out of mana if you’re using the highest ranked spell. As a matter of fact, you should probably use the lowest rank of Chain Heal at least half the time, as it is still extremely effective at rank one. This will allow you to cast more spells throughout the fight, making you more useful despite having periodically weaker heals.

Another thing to be aware of is the application of Ancestral Healing. This talent allows you to apply a powerful, +25% Armor buff to anyone you land a critical heal on. You won’t often cast targeted heals, but this gives you an extra incentive to do so. Chain Heal can unpredictably apply it, but it also can apply it on each tick. It is usually only important that your tank has this buff, so make sure you’re casting a targeted heal to apply Ancestral Healing if it isn’t applying naturally.

The shaman class is usually in high demand for the utility that it brings to raids. The fact that they offer awesome healing is what makes them more than just a totem stand. This means that your raiding role is separate into two responsibilities; healing and totems.

While shamans can serve as a tank healer, they’ll quickly run out of many by casting Healing Wave over and over. This makes them more useful as a backup tank healer, if at all. What shamans really excel at is raid healing. The iconic ability of a restoration shaman is Chain Heal, which heals multiple nearby allies in a chain. This can be trickier to line up with ranged attackers, but it works wonders for the tank and melee units.

Sometimes, shamans are assigned backup tank healers that also help heal the raid. This requires the use of the talent Healing Way, which boosts the effect of Healing Wave by 6%, stacking up to 3 times. This offers you strong direct healing, but is quite mana intensive. Usually you’ll only need to help heal the tank during niche situations in boss fights.

As far as totems go, you can have one air, fire, earth, and water totem. Your fire totem is very useful, so you can just pick up Searing Totem for some added damage.

Your air totem has several options. If you’re in melee range, Windfury Totem is the strongest single ability any melee attacker can receive. Otherwise, Tranquil Air Totem is great for ranged groups. If you have two shaman in your group for some reason, you can also use Grace of Air Totem for +77 Agility.

Your water totem definitely has the most options. You’ll want to use Mana Spring Totem for passive mana regeneration, while also making use of Mana Tide Totem on cooldown. In the event of lots of poison or disease, you can also use Poison Cleansing Totem or Disease Cleansing Totem.

Ultimately your totem choices depend on the fight situation and group environment you’re going into. Do you need specific resistances or defenses? Do you have another shaman in the group? Often times your raid leader will understand how best to apply your buffs.

The actual healing rotation for a restoration shaman is extremely simple. You only have a few spells to choose from, but you’ll primarily use Chain Heal. Chain Heal will heal multiple nearby targets, which makes it much more effective than a single target heal.

To put things into perspective, you’ll actually do more healing doing nothing but casting the lowest rank of Chain Heal all fight than you would be by trying to use Healing Wave at all. This means that you should really only use it when your tank just cannot stay alive.

With that in mind, your rotation begins by placing all your totems. After that, you’ll start spamming Chain Heal. If targets are too spread out or you notice someone about to die, cast Lesser Healing Wave. Otherwise, go back to using Chain Heal.

You’ll want to use a mana potion immediately after consuming around 2000 mana. Use a Demonic / Dark Rune after you use another 2000. Use your Mana Stride Totem on cooldown as well, but make sure you’re not wasting any regeneration by using a mana potion at the same time.

Because Chain Heal can be mana-intensive, you’ll want to cast rank one of it at least half the time. This allows you to still be useful and apply Ancestral Healing to multiple targets while keeping your mana costs low. You can fluctuate between the three ranks based on the abundance of mana you have. If you know you won’t need extra mana, feel free to cast higher ranks.

got a question,
in my raid the classmaster said that the chainheal priotize the grpmember over lowhp raidmember but anywhere i raid that it allways priotize the lowest hp member over all inside the 12,5 yard range can someone can say me the truth about it? (i talk about the classic servers not retail)