Welcome to our shocking enhancement shaman guide for WoW Classic! The shaman is the horde-equivalent of the alliance-only paladin class, although the two play very differently. Between the two, the most interesting damage specialization is undoubtedly the enhancement shaman.

While shamans are usually preferred as restoration, the powerful totems you offer still make you a useful member of a raid. This means that an enhancement shaman has an additional responsibility in addition to dealing damage. You’ll need to stay on top of totem timers to ensure their effects are always active, which will maximize the damage potential of your melee group.

The shaman is the only class that must be played by a horde character. Your options include orcs, trolls, and the mighty tauren. When speaking specifically about an enhancement shaman, your best choice is an orc by far. By default you’ll often be using a two-handed axe, which means you’ll benefit from the orc racial of Axe Specialization. In addition, you have the powerful attack power cooldown of Blood Fury.

If you decide to play anything other than an orc, then you’ll just have to accept that your race choice won’t be as strong. Trolls do have the attack speed cooldown of Berserking, but that ability is less impactful for melee attackers. Alternatively, tauren are by default tankier thanks to +5% health from Endurance and War Stomp. Either way, the differences between the two are minor.

When it comes to race for a shaman, it’s almost as if the class was custom made for an orc. Both Axe Specialization and Blood Fury are very useful for an enhancement shaman, which will make other races feel noticeably weaker.

You can check out all the racial options and abilities here!

One thing you’ll notice about enhancement shamans is you have plenty of options when it comes to talents. You have several defensive choices you can select, or you can forsake them for a strictly offensive build. Whatever you do, you’ll likely end up with at least 13 points in the restoration tree to reduce your hit cap to just 5%. Pick your talents as you need them for your raid group. You may find that some talents aren’t useful because you don’t use the associated spell. 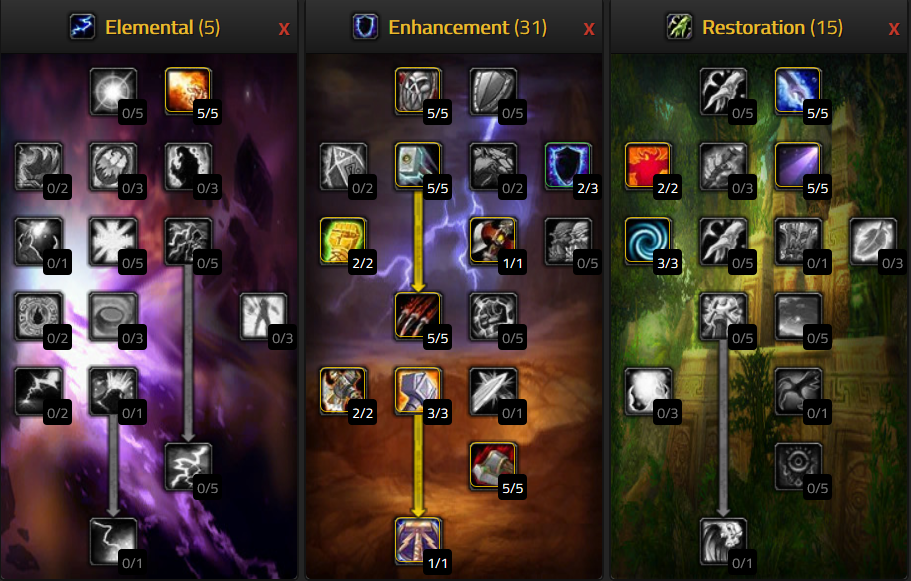 This 5/31/15 talent tree is perfect as a starting point. It is fairly offensive and makes sure to grab all the crucial talents for an enhancement shaman. You have the iconic Stormstrike to grant an extra attack and boost the power of your next two nature-based attacks. You’ll also have Two-Handed Axes and Maces to allow use of two-handers, and 3 points in Nature’s Guidance to reduce your hit cap.

Your main flexibility lies in how you apply your restoration and elemental talents. If you need to occasionally serve as a backup healer, you might want 5 points in Improved Healing Wave. If you don’t have mana issues, you can try shifting points out of Totemic Focus in the restoration tree, and into Call of Flame in the elemental tree. You’ll also notice 2 points in Enhancing Totems. If you’re required to use Stoneskin Totem instead of Strength of Earth Totem, swap out your 2 points into Guardian Totems.

There are many different parts of optimization you’ll want to pay close attention to for an enhancement shaman. They have unique stat priorities, seeing how they benefit from strength, agility, and intellect. This makes optimizing an enhancement shaman unlike any other class! One thing that does stay consistent is the need for several consumables, enchants, and professions to deck your character out!

You can think of the shaman class as that one guy who can find value in everything. Strength? Absolutely, it’ll make your attacks hit much stronger. Agility? Load it up! Enhancement shamans love agility for the boost to their crit rating. Intellect? Shamans have a mana pool they need to keep an eye on, so don’t shy away from it! While shamans can benefit from nearly any stat, there are some that serve them better.

With those ideas in mind, here are the stat priorities for an enhancement shaman:

In addition to hit rating, raising your weapon skill is also a priority for enhancement shamans. Any melee-based attacker needs to max out their weapon skill, although it is heavily recommended for casters as well. Weapon skill is important for melee attackers because it allows you to avoid glancing blows, which deal significantly reduced damage. It also ensures that you don’t miss on top of other small bonuses!

In addition to helping you hit and avoid glancing blows, each weapon skill point gives you:

Another important part of optimizing an enhancement shaman is choosing the right professions to make everything come together. Shamans have the unique position of benefiting from most professions in the game. However, the design and needs of their class make a few choices better than others. Your best option is to pick leatherworking or engineering and pair it with the appropriate gathering skill, which we’ll discuss more below!

Here are the professions you’ll receive the greatest benefit from as an enhancement shaman:

Enhancement shamans have a healthy mix of enchants to collect, all of them offering a variety of bonuses and effects. This perfectly reflects the hybrid nature of the shaman, using everything around their environment to their advantage. Your primary focus is to increase your attack power, but boosting your survivability is just as useful because a dead DPS does no damage.

With that in mind, here are the strongest enchants to have as an enhancement shaman:

Enhancement shamans are no stranger to the game of hoarding consumables. Consumables are often expensive, whether that be your time or gold. Unfortunately, the benefit you get from consumables is absolutely worth the cost it takes to acquire them. The additional damage you’ll deal is definitely noticeable. Taking the time to collect consumables also shows your raid group that you are committed to doing as much as you personally can, even if you’re playing on a hybrid class.

Here are the most-useful consumables to have as an enhancement shaman:

One thing to be aware of is the use of Reincarnation, which requires an Ankh. This allows you to come back to life upon dying, which can be useful as a free battle-rez, or can also help resurrect a fallen raid upon wiping. It’s important that you don’t waste it, so save if it appears that your raid is going to wipe.

When it comes to actually playing an enhancement shaman, there are two things you need to learn. Not only do you need to understand your damage rotation, but you also need to familiarize yourself with your totem rotation. Because shamans are often brought for their totems, failing to have the proper totems out at all times negates much of the effectiveness of your class.

As far as totems go, you can place one earth, air, fire, and water totem at a time, for a total of four totems at any one time. Your fire totem doesn’t benefit your group, so you’ll use either Searing Totem or Magma Totem depending on the number of enemies.

Your air totem is undoubtedly going to be Windfury Totem, possibly the strongest ability in the entire game. Windfury Totem grants a chance-on-hit for group members to strike an additional time with their weapon. For auto-attack focused classes like warriors, this becomes massively beneficial for damage and rage regeneration.

Your earth totem will probably be Strength of Earth Totem, which grants +77 Strength to nearby party members. This is clearly the strongest offensive choice, and you will likely have 2 points in the Enhancing Totems talent for an extra 15% potency. You may be required to use Stoneskin Totem instead for defensive purposes, in which case you’ll swap to that one.

Your greatest source of variety comes from your water totem. For fights that don’t have poison or disease, you can use Mana Spring Totem to help with mana regen, or Healing Stream Totem if raid damage seems high. There will be fights where you’ll need to use Disease Cleansing Totem and Poison Cleansing Totem, so make sure you do your research beforehand!

An enhancement shaman’s rotation is fairly simple. You’ll want to keep your totem effects active at all times. After that, your number one priority is to use Stormstrike on cooldown, as it is your main source of damage. After that, you’ll want to apply Flame Shock for the damage over time effect. If Stormstrike is on cooldown and Flame Shock is active, you can use Earth Shock if threat is low, or Frost Shock if threat is high. If you have several enemies, you’ll want to switch your fire totem to Magma Totem. You’ll also just start casting Chain Lightning rather than melee-attacking.

Following this rotation and keeping a close eye on your mana will put you well on your way to becoming a fantastic enhancement shaman!