Welcome to our WoW Classic guide for balance druids! The versatile druid is capable of filling any role within the game, making it a true hybrid class. Balance druids use Moonkin Form to blast their enemies with arcane and nature damage from afar. While druids aren’t often sought for their damage capabilities, the 3% spell critical chance group buff aura from Moonkin Form and plenty of utility make a balance druid an excellent inclusion to any raid group!

In this guide, we’ll cover the basics of playing a balance druid. We’ll discuss the best talent tree build you can use, in addition to fully covering all aspects of optimization. Since balance druids aren’t the best spellcasters in the game, you’ll need to carefully optimize just to stay relevant. This includes understanding your stat priorities, the best enchants and consumables to use, and professions to give you an extra edge. Finally, we’ll go through your rotation and gameplay tips to help you deal the most damage!

If you plan on playing a druid, you don’t have much flexibility when it comes to choosing a race. Both the horde and alliance each offer only one race that play as a druid. This means you’ll default to a night elf if you want to be alliance, or a tauren if you wish to play as horde. Neither race is particularly beneficial for druids, but that doesn’t matter considering that you don’t have a choice! If you aren’t partial to either faction and just want to see what both races offer, check out all the racial abilities here!

Balance druids have one base talent tree build to work with that you won’t deviate much from. Considering the feral combat tree doesn’t have any useful caster abilities, you’ll go fairly deep in the balance tree and put the rest of your points in the restoration tree. As balance druids aren’t the best damage dealers, you may occasionally need to heal for specific fights or during periods of intense raid damage. 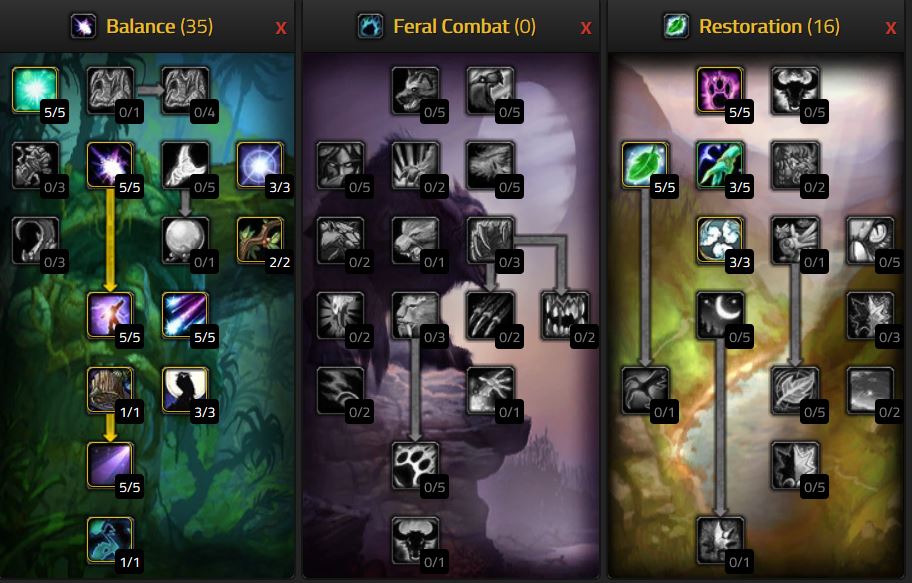 This 35/0/15 talent tree build is a great way to build your balance druid. This allows you to pick up all the damage-benefiting talents within the balance tree, while going deep enough in the restoration tree to pick up 3 points in Reflection for an extra 15% mana regeneration while in combat. If you were to switch anything, you may consider dropping 3 points in Nature’s Focus to put 3 points into Improved Thorns if you’re asked to keep Thorns on your tank.

Considering the naturally low damage output a balance druid possesses, failing to optimize your character will render yourself useless. Any class specialization that isn’t in the top tier of damage dealers will need to optimize just to deal a respectable amount of damage. Failing to do so will often run you into disaster, like running out of mana! This means that balance druids in particular need to pay special attention to ensuring you’re picking the right stats, enchants, and consumables!

The first thing you’ll need to understand about a balance druid are your stat priorities. Moonkins have fairly similar stat priorities to other classes, but there is much less of an importance on spell hit rating and crit rating. Both stats are indeed important, but they don’t directly benefit you like they would a warlock or mage. You’ll still need a respectable amount of spell hit rating and plenty of spell power to make your spells hurt!

Balance druids should prioritize stats in this order:

Another part of optimizing a balance druid that is often overlooked is your profession choices. Professions aren’t necessarily used to directly boost your damage, but they’re great at indirectly helping. Considering the requirement for balance druids to bring consumables to every raid, any profession that eases that burden becomes extremely valuable! Not only that, but professions give you a great way to earn gold, something that may not be easy for a low-damage balance druid.

These are the best professions to have as a balance druid:

Another important part of maximizing your balance druids is selecting the right enchants. Unfortunately balance druids are a little gimped in this department, considering their helm and leg enchant from Zul’Gurub only offers healing power and is designed for restoration druids. You won’t get as many bonuses as other classes might receive, but that gives you even more reason to collect them all as every little advantage adds up!

You’ll definitely want these enchants as a balance druid:

There’s no secret that balance druids have a heavy need for consumables. Moonkins are often affectionately referred to as oomkins, alluding to the fact that balance druids have mana issues! The great thing is that this problem is fixable if you take the time to collect consumables. If you have a healthy supply of potions and runes, you’ll effectively never run out of mana! Without them, you’ll just stand around flapping your wings because you can’t cast any spells!

You absolutely need these consumables to raid as a balance druid:

Considering that a balance druid isn’t your typical spellcasting damage dealer, you’ll need to understand how to make the most of your specialization. Balance druids deal decent damage, but their real power comes from what they offer a raid. They’re especially useful when placed in groups with other spellcasters, generating the greatest benefit from the spell crit aura that Moonkin Form provides. This is made easy thanks to a simple rotation, meaning you have plenty of flexibility to do more than just cast damage spells.

Here are some gameplay tips for a balance druid:

Even if balance druids aren’t known for dealing the greatest amounts of damage, they’re quite a fun class to play! This is mostly due to a very simple rotation, but often times less is more! When you have so many abilities at your disposal, it can be easy to become overwhelmed.

To do the most damage as a balance druid, your first priority is to keep Moonfire applied. After that, you can simply sit back and spam Starfire until Moonfire needs to be refreshed. In the event that you have a fight with heavy movement, you can use Wrath instead for the shorter cast time, but this will lower your overall damage output. Such is the price for a fight not suited for spellcasters!

If you run into several enemies, feel free to channel Hurricane, followed up by individual Moonfire casts on each enemy.

I think the hurricane is a very underrated spell. When the tank collects a large group of mobs, this spell greatly facilitates the work of the healer. And sometimes at all helps avoid loss of the tank.