Welcome to our WoW Classic leveling guide for hunters! Hunters are known for their unique and intense connection to animals, earning the respect of one to fight alongside in combat. Armed with a bow and supported by beast, hunters are fantastic at taking out any enemy, making them one of the best classes to level. As a pure damage-dealing class, hunters excel at killing enemies, but are fairly weak when left to defend themselves.

Leveling up your hunter will be far different than how you’ll end up playing at max level. The biggest difference you’ll notice is your specialization. Most max-level hunters use a marksmanship talent tree build, but you’ll invest heavily into the beast mastery tree for a better leveling experience. This will make most of your damage come from your pet, while also having it take all incoming damage.

This guide will cover several important elements of leveling a hunter. From generalized leveling tips to specific advice for the hunter class, we’ll discuss it further in this guide. While hunters certainly aren’t a difficult class to play, you can make them much more enjoyable if you know how to fully utilize your toolkit.

Some players view level 60 and the end-game as the entire point of WoW Classic, but that misses the point entirely. What makes the game so enjoyable is the long journey of gradual progression. You start as a weakling nobody, but grow into a fierce and capable champion by the time you’ve hit max level. It isn’t always about winning the race, but more about the friends you make along the way. You should try your best to enjoy the leveling process, because you won’t get to do it again once you reach level 60.

Use these tips to make leveling a stress-free journey:

To play your hunter properly, you’ll need to understand how combat on a hunter work. If you’re in melee range, you can only use melee abilities. This is generally the case when you don’t have a pet yet (or you’re in the process of reviving it) and you should try to avoid it all costs. If it does happen, cast Raptor Strike for some quick damage. You can then try to Wing Clip and run out of melee range.

Once you have a pet with Growl turned on, you should never really have aggro again. This means you can reliably use your ranged abilities. Your rotation will always begin with Hunter’s Mark for the ranged attack power bonus. You’ll then want to make sure your auto shot fires. After that, apply Serpent Sting for the damage-over-time effect.

After this, you’ll weave between ensuring your auto shot fires and using Arcane Shot/Multi-Shot. You’ll continue this until Serpent Sting expires or your target dies, whichever occurs first.

If there are multiple enemies around, Multi-Shot becomes your immediate priority. Follow the standard Hunter’s Mark > Auto Shot > Serpent Sting > Arcane Shot with that one change.

Once you’ve learned Aimed Shot (in the 50s), use it instead of Arcane Shot. 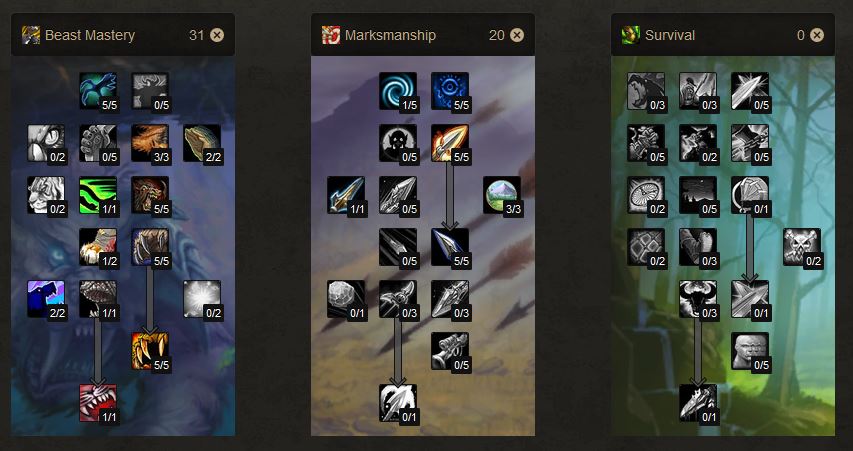 The best way to level a hunter is to go beast mastery. This will put most of your strength into your pet, which is fantastic because it gives you an extra source of damage and a primary line of defense. Not only can you revive and heal your pet, but you can also control how it attacks and moves, giving you plenty to keep track of.

Anytime you go to train your own abilities, make sure that you’re also training your pet at the same time!

Beast Companion: Upon reaching level 10, you’ll gain access to the most iconic part of the hunter toolkit: a pet! While you level your hunter, your pet will deal a good chunk of your total damage. It will also absorb most incoming blows for you. This means that a pet more-than doubles your effective power, rendering you extremely weak without one.

Each race has their own quest to complete, requiring you to tame various beasts found in your home race’s region. Based on the animal family each beast comes from, pets you tame will have varying stats. Some animals, like wolves and cats, are particularly skilled at dealing damage, however are fairly squishy. Others, like bears and turtles, are proficient at taking damage, although compensate by dealing less of their own.

You should attempt to tame a cat whenever you come across one as they deal the highest damage while leveling. Alternatively, a wind serpent is a good choice too as their primary attack is actually a spell.

One way you can aid in the leveling process is by using professions. While professions are focused on gathering and crafting, taking you away from combat, they can still make the leveling process smoother! You can pair two gathering professions together to give you the greatest farming potential, which will result in great gold generation for you. Alternatively, you can pick a gathering and a crafting skill to make yourself useful equipment or consumables! Either way, professions add another dynamic to your character that will make it easier to enjoy.

These professions are excellent for leveling up on a hunter:

Hunter’s Mark w/ Pet Attack – This macro will automatically target your nearest enemy and apply Hunter’s Mark. At the same time, it will also send your pet in to attack, using their Dash ability if it is available.

Pet Retreat – Quickly calls your pet back to your side, using Dash if it is available.

Auto Attacking – This macro will automatically target your nearest enemy. It will also begin your auto shot or melee swing depending on your range. You can press the macro again to cancel your auto shot.

The first macro has been blocked by blizzard apparently

Mend Pet is channeling ability in Classic so it cannot be “pre-applied” unfortunately.

Hey there, thanks for catching this for us. It’s been changed. Thanks again for helping us improve the guide!

The link to the talent tree no longer works. Maybe paste the graphical version into this guide like all the other class guides to prevent future breakage as well?

Hey there, we recently rebuilt out talent calculators and we’re still going back through and updating the guides. I’ve updated this one for you, sorry about that!