That’s right, a survival hunter is in fact a melee hunter! This makes it quite different from the other two specializations, considering you’ll use different abilities and therefore have different needs. Survival hunters thrive when they’re able to take direct damage, allowing them to dodge and parry, which allows the use of Mongoose Bite and Counterattack.

In this guide, we’ll cover everything you’d want to know about playing a survival hunter. We’ll go over your rotation and how the class functions in combat. We’ll also cover every aspect of optimization, including your consumables, enchants, professions, and your stat priorities! Race and talents are also important to survival hunters, so we’ll detail those just below!

Hunters have the flexibility as playing either for the horde or the alliance. Even for the survival specialization hunter, horde racial abilities are far superior. At the same time, alliance hunters shouldn’t be overlooked as they offer solid defensive bonuses for a melee-oriented hunter.

If you’re curious what each race offers for a survival hunter, take a look at all your options here. You can also check out our analysis for each faction just below!

If you want to play as an alliance hunter, you’ll need to pick a dwarf or a night elf. Dwarves are typically the best option, but the playing field is more even for the survival specialization. Dwarves do still have Gun Specialization, which will still provide passive bonuses despite attacking with melee weapons. They also have Stoneform for added durability, making them a good choice.

Night elves are also a decent choice considering that they have the highest base agility value in the game. They also have the passive ability, Quickness, which add +1% Dodge, crucial for enabling Mongoose Bite. Considering this is less likely to happen in a raiding environment, it makes night elves less effective. This gives dwarves a slight advantage, but not by much.

The horde definitely have it made when it comes to survival hunters. Tauren are an alright choice simply due to naturally higher health with Endurance and a stun with War Stomp. Outside of that, they have the lowest starting agility value of any race, but also have the highest starting strength value.

Trolls are typically the best choice of hunter if you want to raid, but they’re less valuable as a survival hunter. They’re definitely better than a tauren considering they have Bow Specialization for passive bonuses and Berserking for an attack speed cooldown. Trolls would be the best choice, but orcs are just better.

Orcs have access to Command, which boosts pet damage by 5%. They also have the passive ability Axe Specialization, which will require you to use an axe to benefit from the added weapon skill. Unlike the other two specializations, survival hunters actually can benefit from Blood Fury, one of the strongest racial abilities in the game that grants +25% melee attack power for 25 seconds on just a 2 minute cooldown. Orcs are clearly the best, but a troll makes for an alright choice too. 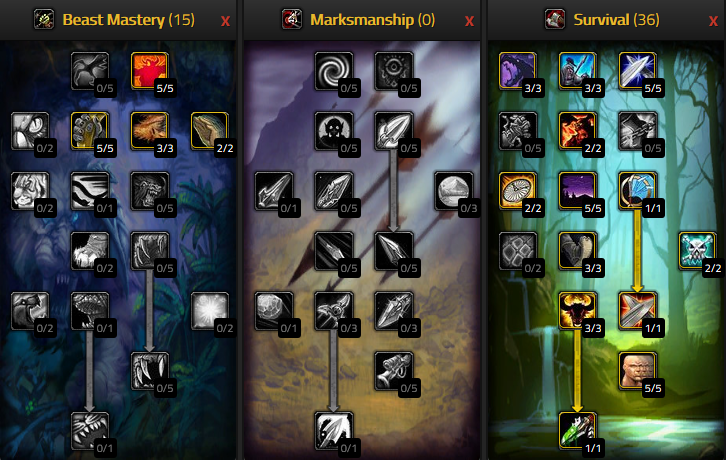 This 15/0/36 build is the strongest talent setup you can use in just about any environment. Nothing low enough in the marksmanship tree is worth grabbing, and you’ll notice that you actually take Improved Aspect of the Monkey, meaning you’ll use Aspect of the Monkey rather than Aspect of the Hawk. This goes deep enough into the beast mastery tree to pick up talents that bolster your pet, meaning you should also be focusing on keeping it alive. The only thing you might consider picking up is Unleashed Fury if you know that you won’t ever be taking direct damage to dodge and enable Mongoose Bite.

Before you understand how to optimize a survival hunter, it is important to understand the purpose of the specialization. Survival hunters thrive when they’re able to hold threat and take damage, but they aren’t strong enough to function as a tank. Without taking damage, survival hunters lose access to two of their core abilities. This severely limits the damage output of a survival hunter, which means it isn’t typically viable in a raid setting.

There may occasionally be settings where you will be taking direct damage (think whelps on Onyxia), which can make the specialization quite impressive. This is not often the case, which makes the specialization underwhelming as a whole. You should not expect to top the damage meters as a survival hunter, but optimizing is the only way for you to do passable DPS!

Stat priorities for a survival hunter are quite different than the other two hunter specializations. Considering that you attack with a melee weapon, attack power and strength become far more important for the survival specialization. You’ll still need hit rating and agility, so gearing turns into a fun balancing game.

With that in mind, here are the priorities for a survival hunter:

Weapon skill is particularly important for a survival hunter, especially because you fight using a melee weapon. Raising your weapon skill will allow you to avoid glancing blows, which severely reduce the damage an attack does. This will also help you to make sure your abilities actually land in the first place, a priority considering how few abilities you have access to in the first place.

Each time you level up a weapon skill you’ll gain:

Professions are also quite important for helping a survival hunter be useful and deal acceptable damage. Engineering should almost be a requirement for the class, considering that bombs are a decent way of supplementing your damage. You can pick any other profession that suits your playstyle, it just won’t perform as well as engineering.

These are the best choices for professions as a survival hunter:

Enchants are also an important part of optimizing your survival hunter. Falcon’s Call is less effective for the survival specialization because you won’t benefit from ranged attack power, but the hit chance will still help. Additionally, the scope you pick doesn’t matter much, especially considering that Biznicks 247×128 Accurascope only applies to ranged attacks. Everything else is focused around giving you as much melee attack power as possible.

You’ll want to collect these enchants as a survival hunter:

These are the essential consumables for a survival hunter:

Your only real cooldown (unless you picked an orc) is the talent Deterrence, which boosts your dodge and parry chance by 25% for 10 seconds on a 5 minute cooldown. Not only is this fantastic for increasing your survivability, but using it increases the chance for you to use Mongoose Bite and Counterattack. Make sure you use it only when you know you’re going to take direct damage. If you have access to Blood Fury, feel free to use it on cooldown, but try to line it up with Deterrence for a massive damage spike.

Even as a survival hunter, you still have two important ranged abilities. Wyvern Sting is your 31st talent, which puts an enemy to sleep for 12 seconds. Upon waking, a damage-over-time debuff is applied. This has a 2 minute cooldown, so it can come in handy if you need to quickly crowd control an add. Tranquilizing Shot is also important because it can remove frenzy. This is important particularly for fights within Molten Core.

Survival hunters pose quite an interesting dilemma. Their toolkit suggests that they play as a tank, but they don’t have enough defensive bonuses to reliably service as one in a raid environment. You cannot use Mongoose Bite without dodging, nor can you use Counterattack without parrying, neither of which will happen unless enemies are attacking you.

This means that a survival hunter is most effective as a backup offtank, only taking aggro on non-boss enemies. This will allow you the greatest use of your toolkit, which can actually be quite powerful. Unfortunately, the inability to use all of your abilities at all times is what makes the specialization difficult. On some fights, you will just be relegated to handling any mechanics, trying to rez with jumper cables, and using the few abilities you can.

Your pet is important as a survival hunter, especially considering that you’ll be fighting right next to it. Just like the other two specializations, your best choice of pet is still a wolf so you have access to Furious Howl. Furious Howl boosts the physical damage of you (and your party’s) next attack. This means it gives the greatest impact to you, making it the strongest pet to have.

One thing to consider for your pet is the use of Cower. Unlike the other two specializations, you actually want threat. Allowing your pet to drop aggro is great for helping you take it if the situation allows for it.

Depending upon whether or not you’re able to soak damage, your rotation will be basic or robust. If you don’t have the luxury of taking direct damage, then your rotation is as simple as using Raptor Strike and Wing Clip on cooldown, as those are the only melee abilities you have. Auto attacking will make up most of your damage if you’re unable to dodge or parry attacks.

This is why engineering bombs are fantastic for survival hunters. With the lack of abilities to use, you have much more flexibility to use bombs. Use your bombs at the beginning of a fight and immediately as they come off cooldown.

If you can take damage enabling you to dodge and parry, things get much more interesting. In addition to Raptor Strike and Wing Clip, you’ll now be able to use Mongoose Bite and Counterattack. In this scenario, you should still prioritize Raptor Strike, but you’ll want to use Mongoose Bite and then Counterattack if they’re available before using Wing Clip. If you need to pull aggro, you can use Distracting Shot to taunt.

If I'm not working or spending time with the family I'm probably gaming. Some of my favorite recent games I've played are Far Cry 5, World of Warcraft Classic, and 7 Days to Die.
Subscribe
3 Comments
Most Voted
Newest Oldest
Inline Feedbacks
View all comments

I am not sure who is following this guide, but as a former survival hunter from a top tier raiding guild as well as experienced in pvp bgs/arenas etc, I’d really suggest survival hunters not follow this guide and not try to be a melee hunter in vanilla/classic. You are really going to hinder yourself. Surv does not equal melee. Surv/marks is a much better build than surv/bm and will allow you to do well in pve and pvp. Survival does offer some great flexibility and tools for pvp and helping to survive melee for a very short time and more tools to help u get back out to range where you should be. Don’t sit in melee. Get back out to range. In pvp, any other melee class will absolutely destroy you, and in pve you will not survive trying to tank and your dps will be so comparatively low that no group will want you when they can just grab a rogue instead. Hunters in vanilla are not going to excel in melee. Its just something you should accept. Now if you’re just having fun and dont care, go for it and enjoy.

there was no arenas in vanilla. on other hand the guide is good, i even use daggers as melee hunter. took me about 2 weeks to get from 1-60

Would love to know your opinion on my Melee Hunter guide: https://barrens.chat/viewtopic.php?f=16&t=1542