Despite a simple rotation, there is a fair bit to understand when it comes to a retribution paladin. In this guide we’ll cover everything you need to fully utilize your retribution paladin’s toolkit! That includes race choices, different talent tree builds, and several different ways to optimize your performance!

Paladins are by nature followers of the light, which certainly can be found throughout the retribution specialization. The ability to buff allies and also serve as a backup healer are important to keeping a retribution paladin relevant despite low damage output.

If you’re deciding to play a retribution paladin, you should understand you probably won’t top the damage meters. The paladin is a hybrid class by nature, evidenced by their ability to fulfill all three roles. When a class has so much flexibility, it loses specialty. In the case of paladins, they lose out on superior damage in favor of more utility and healing. This makes a retribution paladin quite a unique damage-dealing class, one that won’t always be actually attacking.

Paladins can only be played by two races from the Alliance. These include humans and dwarves. Neither race have very good active racial abilities that are good for retribution paladins, but humans do have a slight edge in offensive power due to Mace Specialization and Sword Specialization.

On the other hand, dwarves are a bit tankier because of the use of Stoneform. Since neither advantage is very big, it doesn’t matter too much which race you choose. If you want to be safer, play a dwarf. If you want a little more power, pick a human! You can check out all the racial differences here.

There are multiple different ways that you can build a retribution talent tree. This is because your talents will ultimately be decided by your play style and what you’re aiming to accomplish. Are you strictly focusing on damage, in which case you want Consecration? Do you need to build a raid-supportive path instead so you have Blessing of Kings?

Your talent choices are definitely up to you, but here are a few good talent trees to serve as starting points: 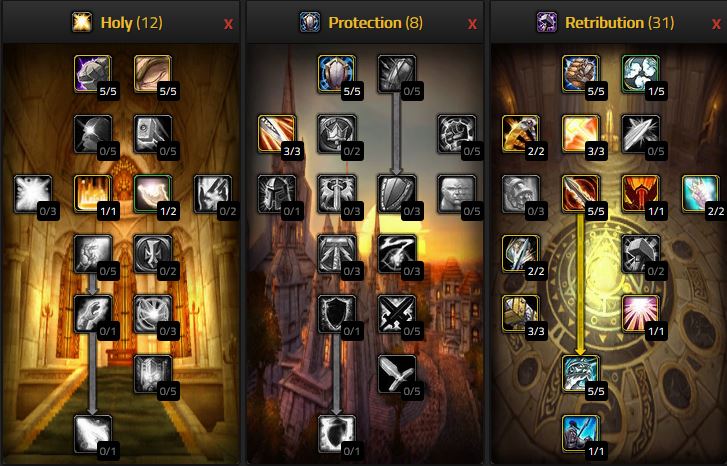 This is a fairly standard 12/8/31 build that you might find on most level 60 retribution paladins. It takes you far enough in the holy tree to grab Consecration, in the protection tree to put 3 points in Precision, and in the retribution tree to grab Repentance. The 5 points in Divine Intellect at the beginning of the holy tree are flexible and can be swapped elsewhere if you so desire. 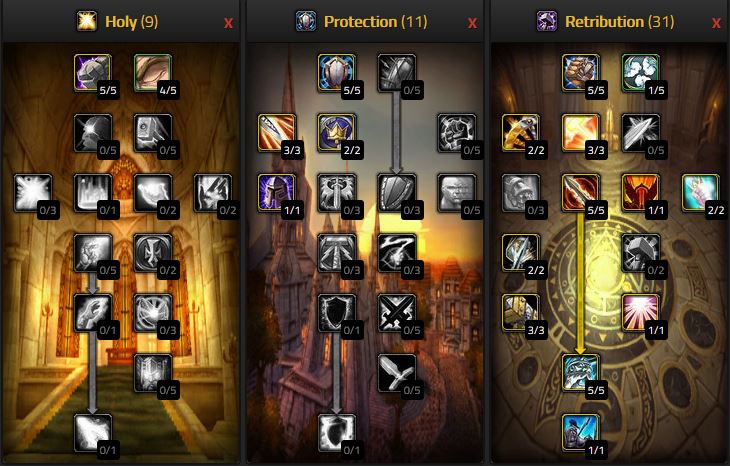 This build is a little more defensive, opting to take Blessing of Kings instead of Consecration. This does mean that you’ll need to spend more time buffing and you’ll also lose a damage ability in your rotation. Usually you’ll only use this build in niche situations where your raid composition would benefit from having Blessing of Kings over Blessing of Might. 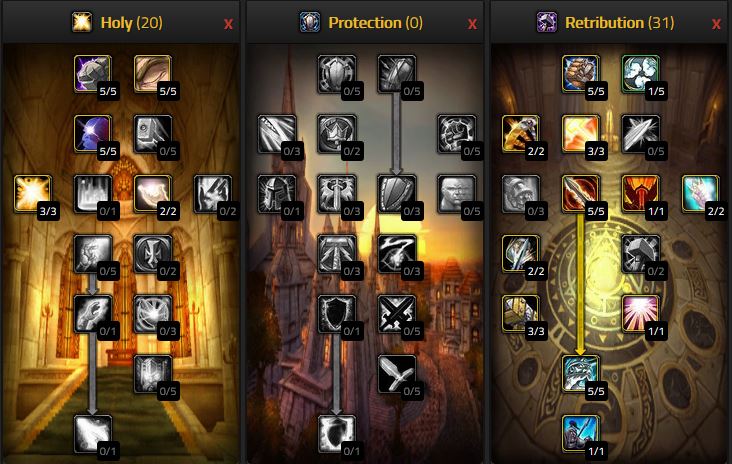 This build is very support-oriented and has less of a focus on dealing damage. With this build you’ll have the shortest cooldown for Lay on Hands while also having strong healing output from Holy Light and Flash of Light. Note that this 20/0/31 build does not have 3 points in Precision, which does mean you’ll have a lower hit chance. This build should only be used in scenarios where your raid needs more damage overall, but is struggling to keep the tank alive.

Something that is often overlooked in regards to retribution paladins is optimization. Even though it is a hybrid class that doesn’t have impressive damage output, you will want to spend the time required to optimize a retribution paladin. You might not jump to the top of the damage charts, but you’ll certainly make yourself look more respectable while also offering plenty of utility to the raid.

The first thing you need to know about optimizing is stat priority. Retribution paladins probably have the weirdest stat priorities in the entire game because of their ability to benefit from both attack power and spell power.

With that thought in mind, here are the stat priorities for a retribution paladin:

Another important part of a retribution paladin is raising your weapon skill. Because a retribution paladin is a melee attacker, you will want to ensure that your attacks actually land. Thanks to the Precision talent, you won’t need to look for very much hit rating. However, you will need to max out your weapon skill for whatever weapon type you decide to use.

Not only does it increase your hit chance but, each weapon skill point also gives you:

Retribution paladins have the flexibility of choosing whatever professions suit their fancy. Engineering remains the best option for added utility, but there are a few others that are also helpful for a retribution paladin.

Here are the professions you’ll benefit from as a retribution paladin:

Another important aspect of optimizing is enchanting! Because of the unique stat priorities of a retribution paladin, you’ll benefit from a mixture of traditional melee bonuses and spell bonuses. This means that you do have a lot of flexibility when it comes to choosing enchants, so you’ll want to choose based off of your needs.

Here are the best enchants to choose from as a retribution paladin:

Once you’ve finally got all of your enchants and gear ready to go, you’ll want to start stocking up on some consumables. These can often be expensive and time-consuming to collect, so you’ll want to make sure you save these for raid encounters only. While they might not seem essential, failing to stock consumables can absolutely be the difference between killing a boss and completely wiping.

Here are some of the most important consumables to have as a retribution paladin:

While the actual gameplay aspect of a retribution paladin isn’t difficult, you definitely will want to understand your role and purpose beforehand in order to be useful. While paladins are definitely labeled as a damage-dealing class, they’re often utilized for their powerful blessings as well.

When it comes to choosing a seal, you’ll want to apply Judgement with Seal of the Crusader active to increase the holy damage they take. After that, your seal choice will depend on the attack speed of your weapon. If it is 3.5 or slower, you can use Seal of Command. If it is 3.4 or faster, you’ll continue using Seal of the Crusader.

As a paladin, your most noteworthy abilities are your blessings. More specifically, Blessing of Might for extra attack power, Blessing of Wisdom for mana regeneration, and Blessing of Kings for +10% to all stats. Kings requires you to select it via talents, but you’ll probably take it if you have a raid group with several casters.

You’ll want to ensure these blessings are maintained at all times. Considering how simple your rotation is, this makes it very simple to maintain blessing buffs on the whole raid while also keeping up with your rotation. You’ll just need to remember that buffing is part of your role.

On top of buffs, you also have the iconic paladin bubble. This grants invulnerability for 10 whole seconds, but it also renders your target unable to attack. While this might not seem terribly useful, it can save a raid member in a dire situation. You can also use Lay on Hands for a instant, full-health heal on a long cooldown.

The largest benefit is definitely blessing buffs. Given that Greater Blessings last for 15 minutes, you’ll only need to refresh them 4 times an hour. If you don’t have upgraded Blessings, they’ll last just 5 minutes, requiring 12 refreshes per hour. It certainly isn’t difficult to buff your raid, but it will certainly become tedious if they only last 5 minutes.

As a retribution paladin, you will be required to maintain blessing buffs on the raid. This makes buffing just as important as your rotation and dealing damage.

On top of blessing buffs, you also have the flexibility to serve as a backup healer in a pinch. This is mostly due to Blessing of Protection and Lay on Hands, both of which have lengthy cooldowns. You do still have access to Holy Light and Flash of Light, meaning you can help top off a tank when damage is very high.

Your raiding role as a retribution paladin will ultimately be decided by your raid group. You’ll probably just focus on distributing buffs with a secondary focus on dealing damage.

Part of why retribution paladins aren’t very popular is the rotation. Or quite frankly, the lack thereof. Retribution paladins rely on auto attacks and passive procs for a bulk of their damage. This does work very well for them considering their raiding role, giving them plenty of freedom and time to apply blessings because there aren’t many active offensive abilities they need to prioritize.

Despite that, there is an accepted way of ensuring you deal the most damage. You’ll want to start every fight with Seal of the Crusader so that you can immediately use Judgment to cause your holy attacks to deal more damage. After that, you’ll want to keep either Seal of the Crusader or Seal of Command applied at all times (SotC: Weapon Speed 3.4 and lower, SoC: Weapon Speed 3.5 and higher).

As long as you maintain the debuff from Seal of the Crusader on your target and always have Seal of Command (or SotC) active, the only other thing you’ll do is use Consecration.

To simplify, debuff with SotC > keep a seal active > Consecrate with Vengeance up. A very simple rotation, but fortunately the retribution paladin has more to do than just sit back and swing away by buffing and healing!