There are several things you should know in order to successfully play as a marksmanship hunter. You’ll want to understand how to play and the best rotation to use, but you’ll also want to know the race and talent options that are best suited for the specialization. This guide will also cover all aspects of optimizing your character, including enchants, consumables, professions, and how you should be prioritizing stat values.

Hunters are often regarded as one of the easier classes to play solo. With the aid of a pet, plenty of utility, and the ability to attack from range, hunters are truly a formidable class! Mastering your marksmanship hunter is absolutely worth the effort. Doing so will allow you to maximize your damage, which is important for securing a raid spot!

Of all five races that can be a hunter, all of them are a solid choice. Your best option will ultimately depend on your specialization, but marksmanship still has clear favorites on both factions. The horde does have an advantage when it comes to racial benefits, but that doesn’t mean an alliance hunter will be weak!

You can check out all the abilities offered by each race option here. Otherwise, take a look at your preferred faction below!

If you want to play as an alliance hunter, you’ll need to pick either a night elf or a dwarf. Both of these are decent choices, but a dwarf has a slight advantage if you’re able to use a gun. Night elves do have the ability Shadowmeld, which can be useful in a few niche situations. More beneficial is the fact that no other race starts with a higher agility stat value.

Dwarves are slightly better because they have access to Gun Specialization, which slightly boosts weapon skill with guns. You won’t benefit from this unless you’re using a gun, so this makes the difference between the two races fairly negligible. Dwarves also have Stoneform, so they also make for a decent defensive choice.

Horde have several options when it comes to being a hunter. You can play as a troll, tauren, or an orc. Tauren are definitely the weakest choice of the bunch, considering they have no racial abilities that offer a benefit. War Stomp may come in handy for an additional stun, plus Endurance for +5% Stamina never hurts.

Orcs are typically the best choice, but not when it comes to marksmanship. Because hunters have the unique ability of attacking with ranged attack power, they won’t benefit from Blood Fury, which only boosts melee attack power. They do also have Command for +5% damage from your pet, but marksmanship is less concerned about using a pet, and may not even have it out at all for some encounters.

This means that a troll is by far your best choice. Not only do they have Bow Specialization for a boost to bow weapon skill, but they also have the powerful ability, Berserking. Berserking grants additional attack speed based on missing health, but it also synergizes very well with Rapid Fire, a hunter’s main offensive cooldown. If you’re playing a marksmanship hunter, you should definitely be a troll!

When it comes to picking your talents, marksmanship hunters tend to have less flexibility with what they choose. Most of the beast mastery tree isn’t very useful considering you aren’t concerned with pet survivability or damage, but there are some good choices in the survival tree. This means that your best talent setup will generally look like 5/31/15. 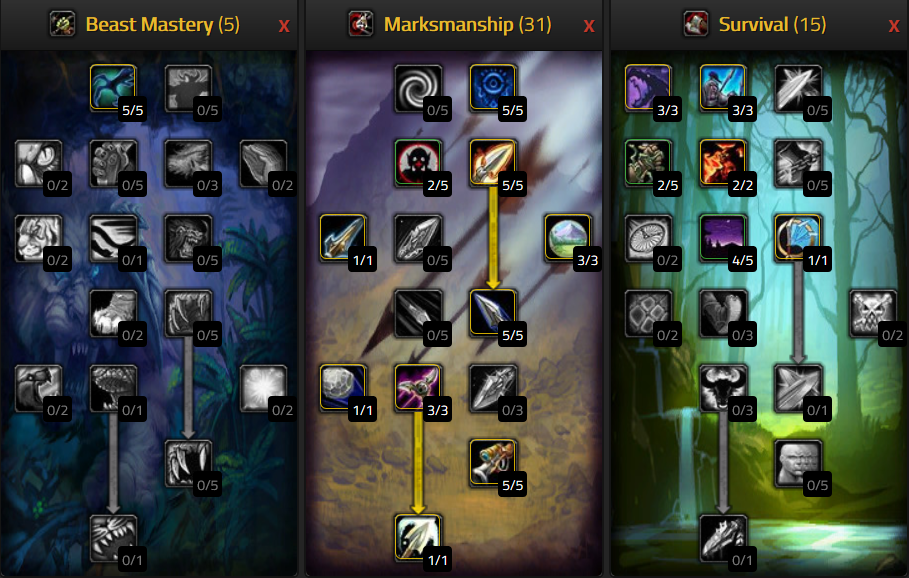 This 5/31/15 setup is the best you can use as a marksmanship hunter to maximize your damage. It selects all the important talents in the marksmanship tree, most notably Aimed Shot and Trueshot Aura, but also allows you to pick up Deterrence in the survival tree for a critical defensive cooldown. Considering you won’t use stings or Arcane Shot, none of the other talents in the marksmanship tree are helpful outside of Improved Hunter’s Mark. You can drop a few points in Survivalist to max it out if you’re designated as the hunter who applies Hunter’s Mark.

Your job isn’t done just because you’re level 60 and you have an optimal talent setup. At this point, your journey has just begun! Now you’ll need to go through the process of optimization, which will cost you a lot of time and/or gold, but is entirely worth the effort! Optimizing your character is what allows you to deal the most damage you possibly can, and as a damage-dealing class, that’s your primary job!

First up is your stat priorities. Hunters are quite a weird class, considering they can benefit from agility, intellect, and strength. There are definitely some stats that are better than others, so you’ll want to know which to prioritize!

Here are the stat priorities for a marksmanship hunter:

You’ll also need to make sure and max out your weapon skills. This is mandatory for your ranged weapon, meaning a bow, crossbow, or gun, but it is also a good idea to raise your melee weapon skills. You never know when you might need an occasional Raptor Strike or Wing Clip, so this will ensure that those abilities actually hit and deal good damage when you use them.

You’ll also want to raise your weapon skill because each point will give you:

Professions are also very important for a marksmanship hunter. You can benefit from just about any profession, but there are a few that seem like a natural fit. Seeing that you’ll need a lot of ammunition, you’ll save yourself a lot of hassle by picking up engineering and mining. Alternatively, leatherworking and skinning are a great choice for helping you gear up. Depending on how you want to play, your profession choice might change.

As a marksmanship hunter, these are the best professions to have:

You’ll also benefit from a wide variety of powerful enchants. Hunters in particular get great benefits from enchants, considering that they have access to several hit chance bonuses and use multiple weapons. These enchants can definitely get expensive, but you’ll feel the difference if you spend the time to collect them all!

You’ll need these enchants for a marksmanship hunter:

Last, but certainly not least on your optimizing path, is a nice supply of consumables for temporary benefits. Hunters in particular need a fair deal of consumables, considering that you can quickly run out of ammunition and need pet food to keep your pet happy. It might be expensive, but taking the time to farm up consumables will definitely help you to secure a raid spot!

These are the best consumables for a marksmanship hunter:

That makes up everything that goes in optimizing your marksmanship hunter! Optimization may seem like a hassle, but you’ll be nowhere near your full potential if you skimp out on it. Most raid groups make things like enchants and consumables a requirement of joining.

While optimizing is quite important, it won’t do you any good if you don’t know how to play! Fortunately, marksmanship hunters are quite simple to play in a raiding environment. Multiple abilities are no longer relevant in a raid, which makes your life much easier as a hunter.

Don’t forget to put Tranquilizing Shot on your action bars! This is an important ability that removes frenzy effects. Hunters are one of the few classes that can remove frenzy, so this gives you an added responsibility in certain raids like Molten Core.

While hunters are traditionally known for fighting with a pet, this isn’t always the case for a marksmanship hunter. Beast mastery hunters have the benefit of having a stronger and tougher pet. Marksmanship hunters often avoid the beast mastery tree entirely, meaning your pet is often going to be pretty weak.

Especially since you likely won’t have Improved Revive Pet, there will be several fights where it isn’t even worth using your pet at all. Spending mana and time to revive your pet just for it die a few seconds later isn’t worth the loss of DPS. This doesn’t mean you should never use your pet, but you’ll definitely want to know how likely your pet is to survive a fight to see if it is worth using.

Your best choice of pet is definitely a wolf. Wolves have access to the Furious Howl ability, a unique ability that boosts the physical power of both you and your whole party’s next attack. You’ll also need to unlock rank of Furious Howl, only accessible from Bloodaxe Worg in Lower Blackrock Spire.

The rotation for a marksmanship hunter isn’t very difficult because you only use 2 abilities. Hunters do have access to more, but they aren’t relevant in a raid setting. This applies to Serpent Sting, which isn’t strong enough to take up one of the 16 debuff slots, and Arcane Shot, which shares a cooldown with Aimed Shot.

If you can use a pet, then do so for the extra damage. Otherwise, keep Hunter’s Mark applied at all times (if you’re assigned to it). After applying Hunter’s Mark, your next priority is making sure that your auto attack fires off. Once it does, you can immediately start casting Aimed Shot.

If there are three or more enemies, you can switch a rotation of focusing your auto attack, casting Multi-Shot, and then filling with Volley instead of Aimed Shot.

To simplify, a marksmanship hunter’s rotation is Hunter’s Mark > Auto Attack > Aimed Shot > Auto Attack > Multi-Shot and repeat! You will notice that the cooldown for Aimed Shot is very long, but you only use one ability during that time. Your priority is always to make sure your auto attacks are firing, as this is your largest source of damage. It is a good idea to pick up an addon that can track the reloading time of your ranged weapon, which can help you to ensure you’re not clipping any auto attacks in favor of firing an Aimed Shot.

nice guide, although i’d like to suggest a few changes. You definetely want to maximize pet damage by going 20/31/0 build. It is the highest DPS possible talent build for hunters throughout classic (even P6).

Races for alliance: the only useful weapon that dwarves might benefit from +5 to guns is Larvae of the great worm from AQ40. If you have Ashjre’thul from BWL, don’t swap the xbow out for the gun. True the gun has higher damage cap, but falls off at its bottom cap compared to xbow. secondly the xbow is slower which helps prevent clipping autoshots after casting aimed shot. even after slapping +7 scope on the gun doesn’t make it better than the xbow. To conclude: if you want to PvP, definetely go for dwarf because of Stoneskin (you will destroy all rogues). For PvE, its fairly irrelevant which race to choose, nelfs have a slightly higher base agility which would give them a microscopic advantage over dwarves, but I’d say go for the race you want for PvE.