Beast mastery hunters sacrifice their own ranged power in favor of bolstering their pet. This makes the specialization quite different from any other, as you’ll rely on a combination of damage from you and your pet to slay your foes. Not only do hunters deal ranged DPS, but they also offer plenty of utility with traps and Tranquilizing Shot to make them an important member of any raid team!

In this guide, we’ll cover everything you need to know to play a beast mastery hunter in WoW Classic. This includes race options, talent choices, and everything that goes into optimizing your character. Stat priorities, enchants, consumables, and professions will all be covered! We’ll also cover any relevant information you’ll want to know as far as learning how to actually play a beast mastery hunter!

Both the alliance and horde are capable of being a hunter. As far as racial bonuses and passive abilities go, hunters arguably have the best starting advantages across all races. While there is a  winner for both factions, you definitely can’t go wrong picking any one of the 5 race choices to be a hunter.

If you want an in-depth idea of what abilities each race offers, check them out here! Otherwise, take a look at each faction breakdown below!

The Alliance have just two options when it comes to playing a hunter. You can play as a dwarf or a night elf. Night elves are likely the weakest choice overall, considering none of their abilities directly benefit a hunter. However, they do have the highest starting value for agility of any race in the game.

Alternatively, a dwarf is a slightly better choice for a hunter. Dwarves do have access to Stoneform, a nice defensive cooldown, but it is Gun Specialization that really puts a dwarf ahead. This does mean that you will need to use a gun though, which means that not everyone can benefit from this. The difference between night elves and dwarves is fairly slim, so pick whichever feels aesthetically better to play!

The horde have three options of hunter race combinations, leaving only undead without that choice. Horde hunters can be either an orc, tauren, or a troll. Tauren are always a good defensive choice due to Endurance, but they have the lowest starting value for agility of any race in the game.

Trolls are often great for any class, and that’s no different when it comes to hunters. Trolls have access to Berserking, the trademark attack speed cooldown that makes the race so strong. They also have Bow Specialization, which offers a slight bonus to bow weapon skill. This is similar to a dwarf’s Gun Specialization, but is more useful due to the wider availability of good bows.

Even though a troll is a fantastic choice, it isn’t the best. If you want to do the most damage as a beast mastery hunter, you’ll definitely want to play as an orc. You won’t benefit from Blood Fury because you use ranged attack power, but Command is what makes all the difference. A +5% pet damage bonus for a specialization centered around pet damage is huge, which makes an orc the best choice for a beast mastery hunter.

When it comes to deciding your talents, it is important to understand what role a beast mastery hunter plays. A good portion of your damage will come from your pet, which means that you have a responsibility to keep your pet alive in addition to attack with your own abilities. The mark of any good beast mastery hunter is great pet control. This means that talents that increase the survivability of your pet are also quite useful, even if they do not directly increase your damage. 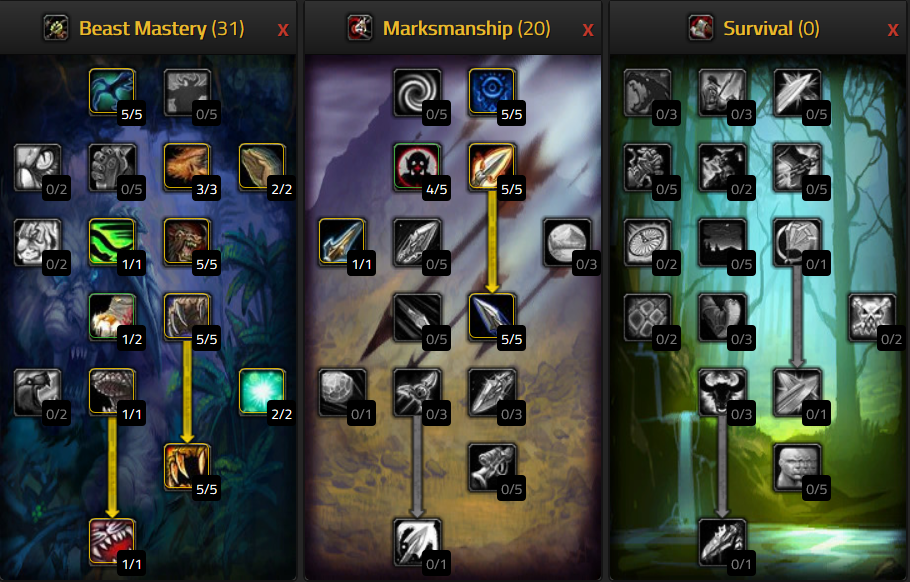 This is a 31/20/0 talent tree that should serve as a good starting point. It goes deep enough into the beast mastery tree to pick up the crucial Bestial Wrath ability, while also picking up Aimed Shot in the marksmanship tree. Your main flexibility here is in the marksmanship tree. As long as you have 11 points to pick up Aimed Shot, you’re free to replace the points Improved Hunter’s Mark and Mortal Shots. Decent alternative choices here include Spirit Bond for health regeneration and Monster/Humanoid Slaying for extra damage against specific enemy types.

There are several different things you can do to maximize your character’s potential. Optimization includes evaluating your stat priorities, picking professions, grabbing enchants, and farming for consumables. While this might be an expensive and time-consuming process, the added power you receive from optimizing your character will make a world of difference! For any players wishing to raid, having a healthy supply of consumables is often a requirement to participate.

One of the most important things to understand about a hunter is how to prioritize stats. Hunter’s hold the unique position of being the only class in the game to use ranged attack power, but they benefit from multiple other stats too. While it is important for a hunter to deal damage, ensuring those shots land and that you have enough mana to cast your abilities is also something worth watching out for.

With those ideas in mind, here are the stat priorities for a beast mastery hunter:

Something else you definitely won’t want to overlook is weapon skill. It is imperative that you raise the weapon skill of whatever weapon type you’re using to deal maximum damage. If you don’t max your weapon skill, you’re vulnerable to landing glancing blows on enemies, which deal significantly reduced damage. Weapon skill also helps you hit, so it definitely important to keep an eye on.

Not only does it eliminate glancing blows, but each weapon skill point  also gives you:

Professions may not be a core part of your class gameplay, but they can definitely make your life much easier. One of the biggest inconveniences of playing a hunter is remembering to stock up on ammunition. The strongest ammunition in the game is made with engineering, which makes it a perfect profession choice for hunters.

Here are the four best professions to have as a beast mastery hunter:

Another crucial part of optimizing your beast mastery hunter is the use of enchants. Enchants are helpful for every class, but they’re especially useful for a hunter because you can acquire more than half of your required hit rating through enchants alone. Most of these enchants are quite expensive, so consider getting them only on pieces you know you’re going to keep for a while.

Here are all of the enchants you’ll want as a beast mastery hunter:

The last item on this list is a nice stack of consumables to plow through. Some people don’t like consumables because the benefits they offer are only temporary, but they’re still worth acquiring. This does mean that raiding is quite expensive to maintain, as you’ll easily go through stacks of consumables if you’re using them every chance you get. While consumables won’t make or break your character, they are the difference between mediocre and great performance.

These are the consumables you’ll need for a beast mastery hunter:

Now that you know everything that goes into optimizing a beast mastery hunter, you’ll want to know how to play one! The hunter class is quite unique because of the way it interacts with a pet. Not only are you responsible for your own character, but you must also look after a beast!

As a beast mastery hunter, your strongest damage cooldown is Bestial Wrath, which increases your pet’s damage by 50% for 18 seconds on just a 2 minute cooldown. Unless you specifically need to save damage for burst periods, use Bestial Wrath on cooldown to maximize uptime and damage.

You also have the ability Rapid Fire, which increases your attack speed by 40% for 15 seconds. Unlike Bestial Wrath, Rapid Fire has a longer 5 minute cooldown, meaning you’ll have far less opportunities. You’ll typically want to save it for periods where you definitely need heavy damage. Pair it with any other damage buffs you receive, like trinkets.

One of your most important abilities is Tranquilizing Shot, which will remove a frenzy effect from a target enemy. There are fights within Molten Core in particular where this ability is required to keep the raid alive, so you’ll need to be familiar with when to use this shot.

While you can tame just about any beast you find in Azeroth, that doesn’t mean they’ll all perform the same. Every type of beast in the world is part of a specific family. Some pets are naturally suited for tanking, like turtles and bears, while others are focused on damage, like cats and wolves.

Strictly for damage purposes, the best pet you can have is a wolf. Wolves have access to Furious Howl, which will boost the physical power of your next party member’s attacks. This is the strongest ability of any pet by far, so you’ll definitely want to have a wolf by your side.

There’s actually a wolf in the game that has a higher rank of this ability than any other wolf. It is the Bloodaxe Worg in Lower Blackrock Spire, who is the only beast in the game with access to rank 4 of Furious Howl.

Because your pet does a significant portion of your damage, it is important that you’re keeping an eye on the positioning of your pet. Just like how you can take damage, so too can your pet. You’ll need to call your pet back to you if there’s powerful abilities about to finish casting. Anytime you need to stop attacking to revive your pet is a significant loss of damage. Not only is your pet dead and not attacking, but you also cannot attack as you’re reviving.

The safest thing you can do is keep your pet on passive and manually control it. This will take a good deal of practice, as you’ll probably forget to manually send him out to attack. When your pet is on passive, you’ll have to constantly monitor it to ensure it does anything. You should also make frequent use of Mend Pet, which will do wonders to help keep your pet alive.

The rotation for a beast mastery hunter is very simple. You’ll actually ignore a good deal of your abilities, like Serpent Sting and Arcane Shot. Serpent Sting isn’t used because it takes up one of the 16 debuff slots and doesn’t have priority. Arcane Shot shares a cooldown with your primary ability, Aimed Shot.

With that in mind, you don’t actually have that many abilities to use in the first place! Your most important sources of damage come from your pet and your ranged auto attacks. With proper pet control, you should be able to maximize the time that your pet is alive and actively dealing damage.

That leaves auto attack damage and ranged abilities. If you’re designed as the hunter to apply Hunter’s Mark, you’ll always want to begin with that. After that, you’ll want to prioritize shooting your auto attacks. This might not seem like something you need to pay attention to, but it is because the casting time of Aimed Shot can overlap with your auto attack speed. This means that you can potentially miss out several auto attacks across the course of an encounter due to casting Aimed Shot too soon.

To simplify, a beast mastery rotation consists of: