Welcome to our druid leveling guide for WoW Classic! Druids are one of Azeroth’s most unique classes, using their shapeshifting ability to dispatch of their enemies. With shapeshifting, druids have the ability to fulfill any combat role in the game, making them excellent at leveling. Any class with healing tends to be great for leveling, but druids take this further with plenty of damage and utility at their disposal!

While level 60 druids typically play as restoration, you’ll need to play completely differently while you level. The restoration specialization doesn’t deal good damage, a big requirement of making leveling efficient. The best way to level a druid is to actually utilize Cat Form and build as a feral druid, making their playstyle similar to a rogue, but with plenty of healing and spells to back it up.

To successfully level your druid, there are several things you can learn to make the process quicker and easier! We’ll cover all of that in this guide, including how you should play and build while leveling. Druids are definitely one of the easier classes to level past level 20, but we’ll also include some leveling tips to speed things up.

Pros to leveling a Druid

Cons to leveling a Druid

Reaching level 60 is no quick task in Classic WoW, meaning you’ll spend a great deal of time during the leveling process. You can shorten this duration with some of the following tips, but your biggest focus should be on having fun! This ultimately comes down to picking the right class for your desired gameplay, but it also means taking time to enjoy the journey. Every gear and spell upgrade you get is significant and you’ll feel how it adds to your power. Picking a class is a huge commitment, but the versatile druid gives you a taste of several different combat roles, so you can’t really go wrong with one!

Here are some helpful tips to make the leveling process simpler and hassle-free:

Your rotation is going to constantly evolve as you level up. Several abilities are fantastic to use, but require a specific level before you can train them. With that in mind, you should remove any abilities that you don’t have access to yet in your rotation, but don’t forget to incorporate them once they become available to you!

Prior to level 10, you can only use spells in your humanoid form. You’ll want to pull with Moonfire, and then immediately pelt enemies with Wrath. Stop to heal yourself if need be.

Your top priority is to apply Faerie Fire (Feral) once you’ve unlocked it in the talent tree. This reduces your target’s armor, making you deal more damage! This does require you to be level 30, so you can use Moonfire as a ranged pull ability until you get there.

After pulling you’ll want to apply a Rake for the bleed effect. Now you can simply use Claw until you’ve generated 5 combo points. If you know your target will still have at least half their health after spending combo points, use Rip. Otherwise, cast Tiger’s Fury, and then finish with Ferocious Bite.

If you have multiple targets on you, you’ll want to switch to Bear Form. Immediately cast Demoralizing Roar once you have the rage. Any other rage you can spend on Maul. 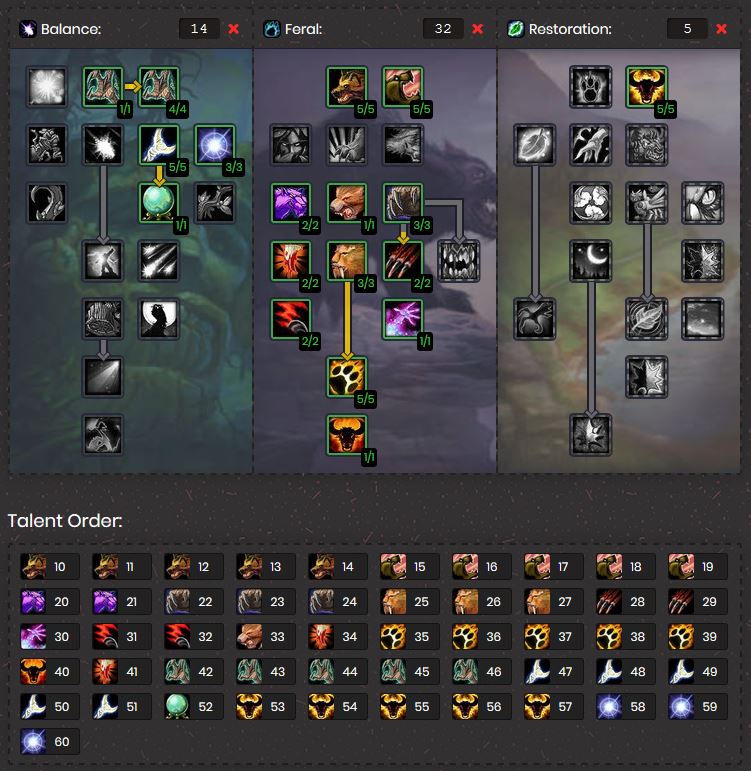 Even though restoration is the best end-game specialization for a druid, you’ll have a much better time leveling as feral. However, you won’t receive Bear Form (or talents for that matter) until level 10. Furthermore, you won’t even learn Cat Form until level 20. Because of this, there are some druid that like to start with the balance tree at level 10, placing points into Nature’s Grasp, Improved Nature’s Grasp, and Natural Weapons. This will give you the greatest damage boost between level 10-20, but you’ll need to reset your talents at level 20 if you choose to do this.

Professions definitely aren’t a requirement to level, but they can make the process much more enjoyable. Not only do they give you a break from the typical grind of questing and killing, but they can offer you substantial equipment and consumables. If you take the time to level your professions, your character will be much stronger overall. Not only that, but professions are a great way of making gold, something that becomes quite important if you want to purchase a mount!

Here are some great professions to train while leveling a druid:

higher level enemies give less experience? is that right?

Got that fixed, thanks drus!