Shamans, while somewhat one note for it, are solid healers in just about any situation.  In PvP, at this bracket, their abilities are somewhat more sought after, as upon reaching level 30, they acquire their self resurrection ability, Reincarnation.  This allows the Shaman to bring themselves back to life immediately upon death.  This can, given the right care, give the Shaman the ability to bring their entire party back from death.  This, coupled with their respectable regular healing, along with their survivability and offensive spells, makes the Shaman a dependable and utilitarian choice for a healer.

Shamans are also a lot of fun to play, with access to a wide variety of disparate and interesting abilities.  They can just as easily deal out Caster and melee DPS, as healing, can turn into a ghost wolf and run faster than almost any other class in the 39 bracket.  Shamans also have the ability to breath under water, spy on enemies at a distance with Far Sight, have a second hearth in the form of Ancestral Call, remove enemy buffs and they can use a shield.

If you like being a crafty, supportive healer, with a lot of solutions to a problem, including just shooting the guy dealing the damage in the face with a lightning bolt, you’ll love playing a Shaman.

This is actually one of the easiest, simplest and totally agonizing aspects of making a Twink Shaman in WoW at just about any level.  There are four races that can play a Shaman and their all Horde races.  This makes the choice of which race to choose so much easier, because you’ve only got three choices, right?  Well here’s the kicker:  All three choices are absolute ringers for playing any kind of Shaman, though some of them fit an enhancement Shaman better.

Choosing which professions to go with can be difficult, because there are quite a few to choose from.  The good news is that Engineering, which is one of the most fun professions, is also really important to get if you are building a Twink.  You won’t want to miss out on all of the gadgets and bombs that this profession offers, because many of them are extremely useful in PvP.

Now, Engineering is really important for any Twink to take, just because of all of the slight edges it offers in combat, which can only be had if you actually are an engineer.  That being said, your other choice of profession is also very important, but will often depend on your preference and which class you are playing.  Blacksmithing for example, is largely useless to a Shaman, as they can’t wear mail yet, and most of the best mail options after level 40 are acquired through Leatherworking.

Following is a description of each profession and why a level 39 Twink Shaman would want them, or not.

From the earlier engineering toy box, the Major Recombobulator makes Polymorph a worry of the past…sometimes.  With the Alarm-O-Bot, you can stop Rogues and Feral Druids from sneaking up on you, and the Dark Iron Bomb, is the bomb with the most damage and longest stun duration you can get this early in WoW.  The Gyrofreeze Ice Reflector, the Hyper-Radiant Flame Reflector and the Ultra-Flash Shadow Reflector, are protective items that reflect all incoming damage of their type for a short period.  These items in particular can quickly devastate any casters targeting you.  Last, but not least, the Arcane Bomb, absorbs a huge amount of mana from all targets in a radius and damages them for half the mana absorbed.

Players attempting to Twink without the financial support of their main will find Enchanting to be the best second choice of Profession.  Most of the green gear you pick up will not be useful to you and you will want to sell it.  Most of the blue gear will not be of use and you will want to sell it as well, but you won’t be able to, because it is Soulbound.  With Enchanting, you can disenchant both and sell the created materials for even more gold.  It’s also a great way of easing the leveling difficulty, by always having a decent enchantment on your gear.

If you can get a line on the required reagents for it, then Alchemy can be both useful and lucrative.  If your main has the mats and your Twink makes the potions, you can even make money for your main.  Being able to just craft all of the potions and elixirs that are so useful in PvP is such a boon and yet another relief on the gold purse, because, as you will find when you start selling these items, they can be expensive.

Shaman are an odd combination of specific, but disparate abilities, wrapped up together to create an extremely utilitarian and practical toolkit.  To many, the Shaman seems intimidating, because of all of its working parts, but in truth, while the Shaman can solve a lot of problems, they can usually only do it in one or two ways.  Shaman spells break down into three basic groups:  Elemental Combat (Ranged DPS), Enhancement (Melee, Support and Tanking) and Restoration (Healing).

The following sections represent these three groups and contain short descriptions of each of the spells in each group that are useful to Twink Shaman Healer.

Shaman have a lot of interesting and beneficial talents to choose from, and which ones to choose can be a difficult and intimidating decision.  Below are two examples of good talent progressions.

The first is a deep focus on the Restoration Tree.  The main goal here is on maximizing the amount of healing you can do and mitigating mana consumption. 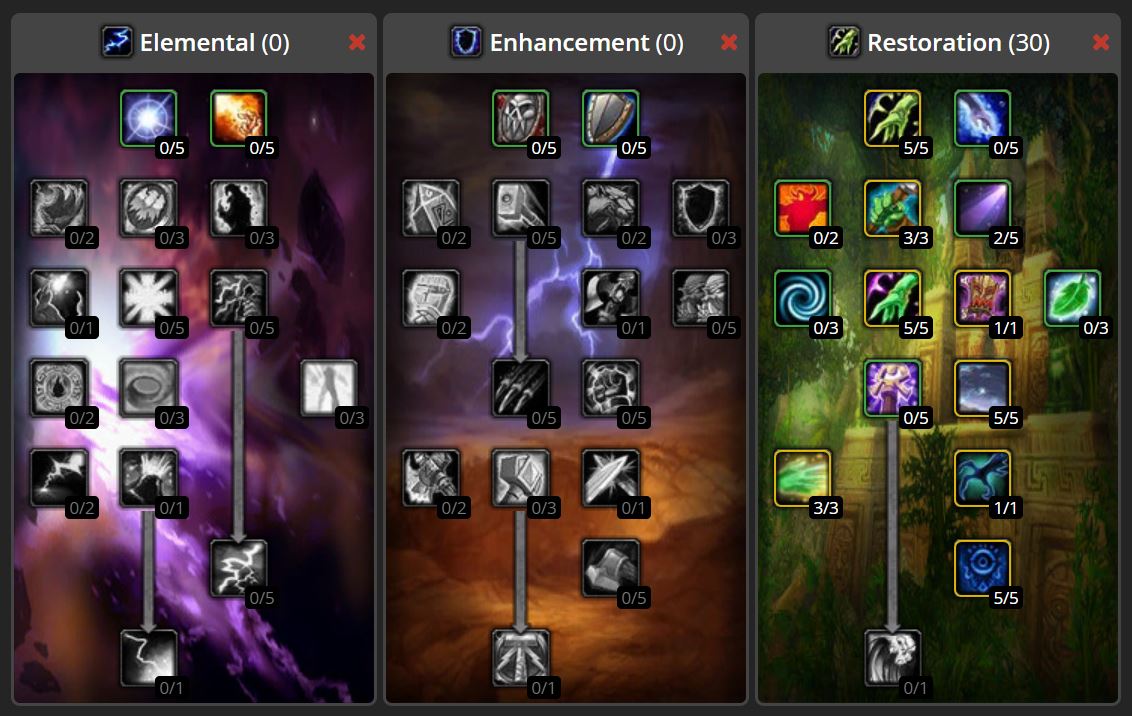 This other build here still tries to focus on healing, while also adding some mobility and protection with the Shield Specialization and Improved Ghost Wolf talents. 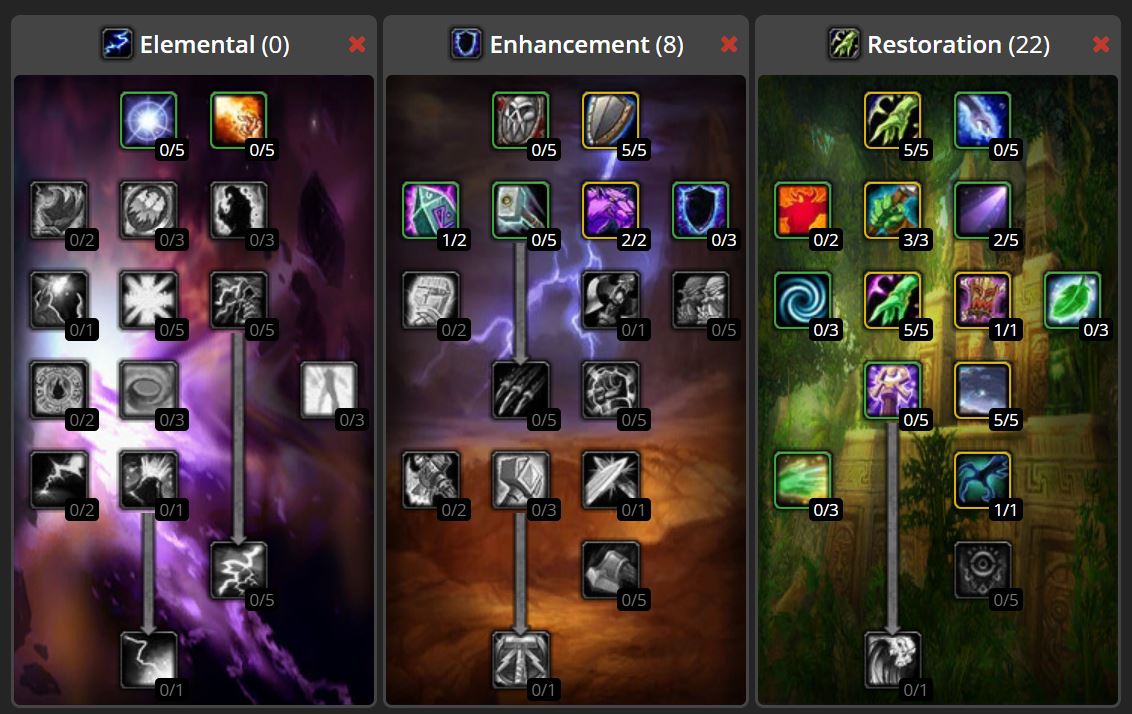 As the Shaman is all about having almost every trick of almost every trade, You might want to go ahead and give the talent calculator a try and see what you can come up with on your own.

The truth is, with any Twink – Gear. Maketh. Man.  Err…humanoid?  The point is, you need all of this gear to make your Twink work at all and getting it won’t be easy, or cheap.

Almost as important as your gear itself, are the enchantments for said gear.  Not every gear slot item can be enchanted, but you’re going to want to get the best enchantments for the ones that can.  Enchanting is expensive, so unless your main is an enchanter, these are going to cost some coin.  This is a list of all of the enchantments you’ll want as a level 39 Twink Shaman Healer.

Consumables are some of the most useful items in WoW and there are a great many especially useful ones for PvP.  Alchemists will have the easiest time with this aspect of Twinking, being able to craft many of these items.  For everyone else it’s either the AH, or making besties with an Alchemist.  You can also get some of them from NPC vendors, occasionally as well.

Only have one Battle and one Guardian Elixir active at a time. Remember this.

There isn’t a class buff that isn’t in some way helpful to a Shaman.  With Arcane Intellect you will have a lot more mana and your heals will crit more often.  Power Word: Fortitude gives you more health to help with survivalbility.  Mark of the Wild is a great buff that raises all of your states and means that there’s a Druid in your party, which means that there are two multitasking bosses on the field.

The spirits have whispered their secrets to you and you now have all you need to create the best level 39 Twink Restoration Shaman!  The primal forces of nature are yours to control.  To wield.  To combine.  Earth, wind, fire, water, lightning!  By your powers combined, uh…you are Captain PLANET!  Now go perish all those polutin’ Alliance folk.  …What?  They’re not the ones polluting.  What happens in two or three expansions?  Oh…oooooh…umm…You’re a Planeteer!  Have fun!