Warlocks are one of the most underrated choices for a Twink and for Player vs. Player (PvP) in general.  While they don’t particularly excel at any one role in particular, they can fill in odd niche roles that make themselves useful and sometimes invaluable to their party, or battle group.  Warlocks have a lot of utility and can offer even light healing in the form of both Healthstones and Soulstones.  One of their other specialties is in almost stark contrast to many other classes.  Where most classes focus, sometimes overmuch, on Damage Per Second (DPS) – usually on a single target, Warlocks excel at spreading damage around and making sure all of their enemies are feeling the burn of their Damage Over Time (DoT).  They are also one of the more interesting classes to play thematically.  The class quests they must undertake to acquire all of their abilities are both rewarding and intriguing.

Race is an important choice for any character in WoW, but for a Twink, in can be even more so.  Each race has distinct traits that set it apart from the others in ways other than how they look or sound.  Warlocks have a somewhat limited choice when it comes to race, but their choices are varied and interesting.  Which race suites you best may just come down to aesthetics, but if you are looking for that extra edge in a Battleground, or in the Arena, pay close attention to the following.

While Engineering is a necessity, you’re other Profession is also important.  Which ones you’ll be interested in will largely depend on your class.

What follows is a description of each of the Professions that should be of interest to a level 29 Warlock Twink and why.

For any Twink, at almost any level, Engineering is a must-have.   You’ve got explosives that offer Crowd Control (CC) effects, like the Mithril Frag Bomb (the stun effect of which can work against even level 60 characters).  Plus some bonus CC with the Discombobulator Ray and anti-CC from the Minor Recombobulator.  These can be extremely useful to a Warlock, as they have few methods of CC themselves.  Not to mention the Goblin Jumper Cables, grant the potential ability to resurrect a fallen ally.  This is especially useful when the group’s Healer goes down.

Warlocks also benefit from Engineering from the head slot gear that it offers.  The Spellpower Goggles Xtreme are your BiS headslot item and the only way to get them is through Engineering.

Warlocks who are also Gnomes will find extra benefits from Engineering in the form of the Rose Colored Goggles, which are arguably better than the Spellpower Goggles Xtreme.  There’s also the Hi-Explosive Bomb, which does more damage than the Mithril Frag Bomb and holds a stun for one more second.

Enchanting is probably the best choice for players who are not supporting their Twink with another character.  It has few expensive reagents that must be truly gathered, most being products of disenchanting items you are already likely to pick up.  It also offers lucrative selling opportunities with the many materials you will acquire from breaking down all of the Green and Blue items you do not need.  It can also offset the cost of getting your own enchantments some, as higher level enchanters are sometimes on the lookout for lower level materials.

If you are funding your twink with your main’s gold, then the gathering professions (Herbalism, Mining, and Skinning) are less viable.  If not, then you might want to think about Mining, as it can get decent gold and help supplement Engineering.  Other than that, the only Profession that is at all useful to a Warlock of any kind is Tailoring, which might be worth it to get one or two of your BiS items for free and can provide some decent pre-BiS gear until you get your Twink equipment.

Cooking:  Cooking has but one benefit to any Twink at any level bracket.  The Well Fed Buff.  The food that offers the highest possible Well Fed bonus at this level is Soothing Turtle Bisque, which gives a +8 bonus.  You can get the recipe to cook these foods from Kelsey Yance in Booty Bay.  Some players may wish to go for the Giant Clam Scorcho, as it is acquired through a faction based cooking quest.  This is still viable, but is more complicated to acquire than the Turtle Bisque.  The choice is, of course, yours.

First Aid:  The only thing to worry about here is to get your First Aid maxed as high as it will go, so that you can use the Heavy Runecloth Bandage, which can heal you almost completely full with just one bandage.  To do this, you will need the three books Expert First Aid – Under Wraps, Manual: Heavy Silk Bandage and Manual: Mageweave Bandage.  The only trouble is that, because you still can’t get your Secondary Skills up to 300 yet, you’ll have to find someone to craft the bandages for you.  Alternatively, you could simply purchase them off of the AH.

Fishing:  This skill is not as important at this level bracket, but it’s still a great way to increase your income, especially while you’re bored and waiting around near some water.  Take any opportunity you can to fish, because each time you fish is a chance to catch a rare fish that can earn you some good money.  It’s also not a bad way to get Cooking and Alchemy reagents to increase those skills.

Warlocks have quite a few useful abilities at this level and many of them are excellent for use in PvP.  When it comes to engaging other players in combat, for a Warlock, the name of the game is DoT.  Aside from letting your demon pet keep foes away from you, you should always be tagging every enemy you see with any DoT spells that you have.

Warlock spells break down into pretty much three groups:  Demonology for conjuring your demon allies and other items, Affliction for your Shadow DoTs  curses and drains, and Destruction for your direct damage fire spells.  What follows is a list of all of the spells and summons available to a Warlock at level 29 that are useful in PvP.

As stated, the Warlock’s main advantage and contribution in PvP is DoT, but with a few talents, some of your DoTs can also be AoEs, if you can cast fast enough.  You want to be doing as much damage to as many targets as possible.  Just don’t forget about your other utilities and your Fear spell.  CC is just as important as taking down health.

Warlocks in classic WoW occupy an interesting intersection of usefulness when it comes to Twinking and PvP in general.  They are amongst the most useful and powerful classes when working in a group, especially in Battlegrounds, but going solo for a Warlock is another matter entirely.  While they are the heartiest of the clothies, they possess few methods of CC, so keeping your enemies at bay is not really an option.

Fortunately for players, this means that their talent selection is very simple.  As stated, when alongside others, you’ll want to focus on your DoTs.  That’s what the first build is for, and you should go with it if you’re interested in being invited to battle groups and teams, because it is the only viable option for group PvP.

The second build is for those of you who are gluttons for punishment and want to duke it out in the Arena.  It maximizes your damage and crit chance with all of your fire spells and Shadow Bolt, it also increases your stamina and the efficacy of your Healthstone.  Going solo as a Warlock Twink is difficult you have been warned. 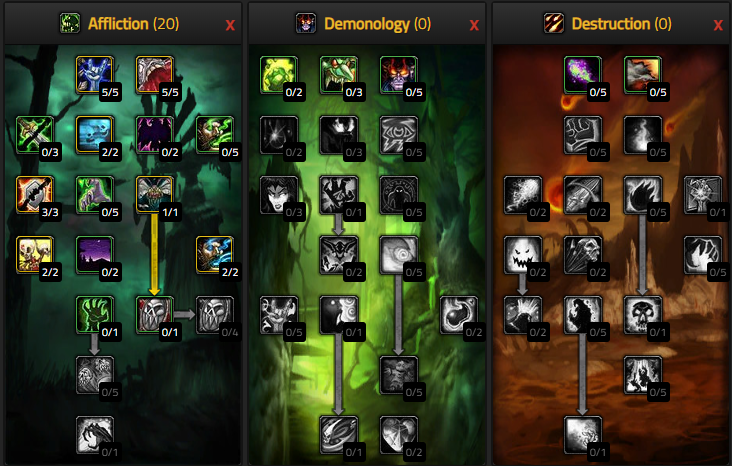 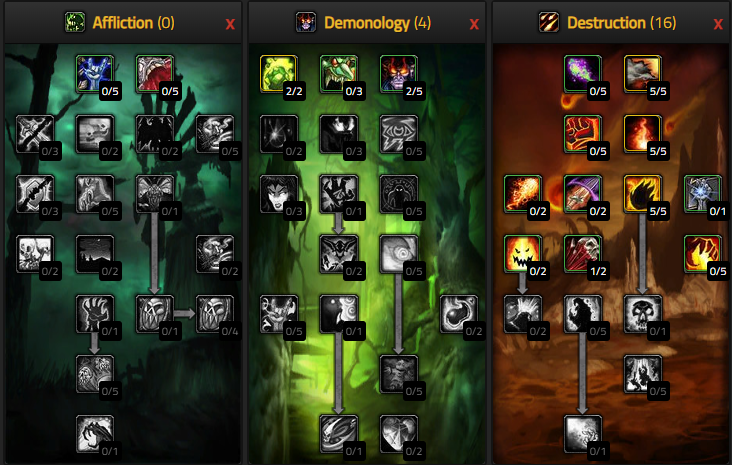 You may want to get an understanding of all of the Warlock’s talents before you play, or perhaps you just think you know better than a guide that’s been written specifically to help you build this type of character.  If either of these are the case, then you’ll want to check out the Warlock Talent Calculator and prove that you didn’t really need this guide anyway!  Good luck!

While clothies aren’t the most gear centric of classes, that doesn’t mean that gear isn’t important.  In fact, you can get some amazing advantages from the right gear. Besides, you’re trying to build the best level 29 Twink, right?  And Twinks are all about the gear. So here’s a list of all of the BiS gear for a level 29 Twink and how to get it. The best way to acquire most of these is on the AH, because most of the items on this list have a very low drop rate.  Good luck, you’re going to need it.

Just remember that with all Elixirs, there can be only one battle and one guardian elixir active at a time.

Power Word: Fortitude should always be on if there’s a Priest to cast it for you, end of story.  Arcane Intellect is also good and if it can be had, then it should.  Mark of the Wild raises all of your stats a little and stacks with most buffs.  Blessing of Kings does kind of the same thing as Mark of the Wild, only a bit better and only for Alliance players.

That’s it.  You’ve not learned all you need to create the perfect level 29 Warlock Twink.  Finding all of that BiS gear is going to be hard, but it will be worth it.  Go now, summon your minions, gather your allies and cover all of Arathi Basin and Warsong Gulch in a blanket of shadowy doom!  Have fun!

Raincaller Robes of Shadow Wrath are a way better option no?

Hey Thomas, thanks for your input. The Durable Tunic is actually a touch better. We found this surprising as well, but for some reason, the Durable Tunic’s Shadow Wrath is better at 19 -20 vs. the Raincaller’s 17-19. Hope that’s helpful! Thanks again for your comment and have a wonderful day.

Can the zandalar signet of mojo actually be applied via do not trade?

No unfortunately it can not

where is the wand?