Welcome to our WoW Classic guide for arcane mages! Of all three mage specializations, arcane definitely raises some of the most interesting questions. Arcane doesn’t have much of a place as a damage specialization by itself due to a limited number of arcane spells, but it is a prominent choice for a hybrid arcane-frost build. Because of that, arcane mages absolutely are a great damage-dealing specialization and capable of dealing incredible damage.

In this guide, we’ll explain the basics of playing an arcane mage. This guide will cover everything you need to optimize your character, including stat priorities, enchants, consumables, and profession choices. It will also explain your rotation and gameplay tips to help you master the spec. You’ll also want to know your race options and talent builds, which can be found just below! All of this will help you become an excellent arcane (frost) mage, letting you top the damage charts in no time!

When it comes to picking a race, the mage class is about as balanced as it can get. Both the alliance and horde can have two of their four races play as a mage. Within each faction, there is a clear superior and inferior race choice if you’re concerned about maximizing your damage output! You can check out all the racial abilities and passives right here. Otherwise, look for your preferred faction below!

Your talents are where things start to get interesting. While you can go with a deep arcane build with the intention of only using Arcane Missiles, this isn’t the best way to use the arcane specialization. You’ll actually deal much more damage casting Frostbolt with a hybrid arcane frost build. We’ll list both specializations here just in case you’re interested, but the arcane frost build does deal more damage while having far less mana issues. 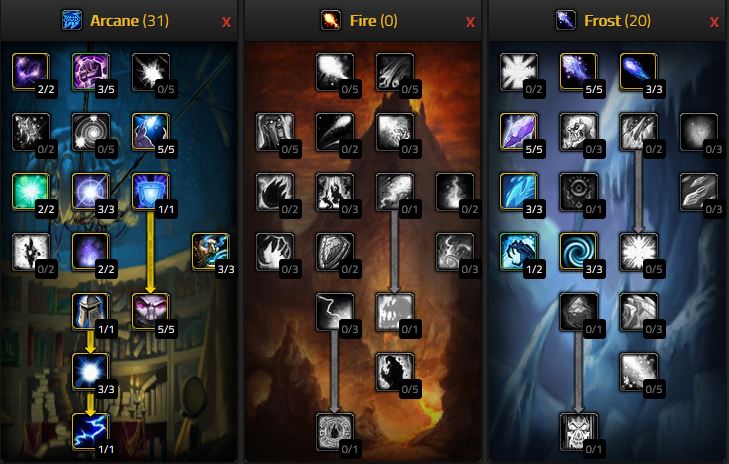 This is the basic outline of the 31/0/20 arcane frost build. It has 31 points in the arcane tree, meaning you pick up the powerful cooldown talents, Presence of Mind and Arcane Power. With 20 points in the frost tree, the only remaining talents are utility or defensive oriented (assuming you have at least one frost mage in the raid with a deep frost build to keep Winter’s Chill applied). This is what allows you to go so deep into the arcane tree, giving you all the offensive bonuses of both the frost and arcane tree. 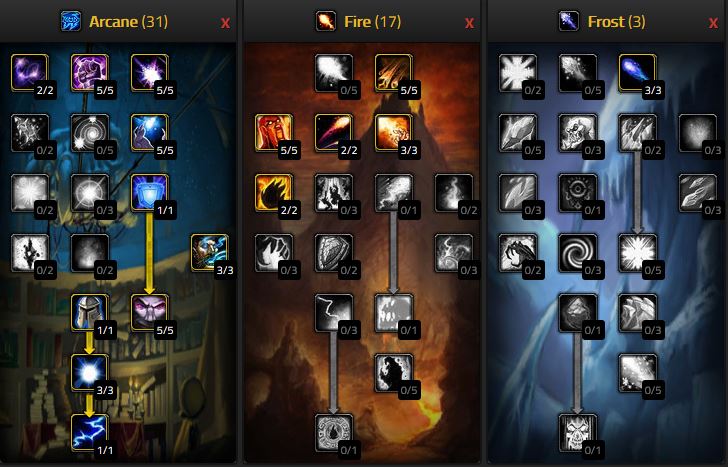 This is the build you would use if you only want to use Arcane Missiles. You can do decent damage with this specialization, but it is quite prone to mana issues, and simply not worth it. Without changing any gear or stats, you can do more damage with an arcane frost build without really trying any harder. You also won’t run out of mana as quickly! If you want to use this build, note that you’ll want to use Fire Blast on cooldown to take advantage of the Ignite talent, which will help supplement your Arcane Missiles damage.

Now you have the thrilling task of optimizing your arcane mage so you do the most damage you can! This is quite an exciting process, as it quite literally makes the difference between being at the bottom of the damage charts and topping them. As an arcane mage, you have all the tools at your disposal to deal impressive amounts of damage, but you need to optimize your character to make sure this happens!

The most important part of optimizing your arcane mage is understanding your stat priorities. Every attribute on this list will definitely make you stronger, but that doesn’t mean you should favor them equally. As a spellcaster, your priority is to make your spells hit harder, but you’ll also need mana regeneration to keep slinging those spells. This makes it a balancing act, but raw power always tends to win out, generally speaking.

You’re also going to need some professions to complete your arcane mage setup. For some classes, professions are an essential. This isn’t necessarily the case for mages, but they can make life a little bit easier. Not only do you have convenient access to crafting, but you also have a great way of making gold. Gold is a great way of buying consumables to help you deal more damage, so you definitely shouldn’t neglect professions!

You can benefit the most from these professions as an arcane mage:

Enchants are always an important part of optimizing. The bonuses you see here might not blow you out the water, but all of them combined together create quite a significant increase to your power. Considering that some of these enchants can get quite costly, you’ll only want to use them on gear you know you’ll be keeping for a while!

Arcane mages should pick up all of the following enchants:

Even better than enchants are consumables. Enchants are great for offering permanent bonuses, but unfortunately these boosts are individually lackluster. On the other hand, the buffs you receive from consumables are significant and great. You can gain over 200 spell power with consumables alone, but all that power comes at quite a cost! This is also why alchemy is a great profession choice. Don’t neglect your consumables, or your damage output will definitely suffer.

These consumables are the best to stock up on as an arcane mage:

When it comes to raiding as an arcane mage, the arcane frost build is definitely the go-to. Arcane Missiles builds suffer from mana issues, meaning you’ll run out of mana far before a mage casting Frostbolt. Not only that, but your Fire Blast + Ignite combination are fairly useless in Blackwing Lair and Molten Core because enemies in those raids are resistant to fire damage. Regardless of what you end up playing, arcane can definitely be a fun and rewarding damage specialization!

Here are some gameplay tips for an arcane mage:

Many people like the arcane frost build to the high damage output it provides while having an extremely simple rotation. It doesn’t get any easier than using just one spell, Frostbolt. If you’re only fighting one enemy, you’ll never use another spell unless you need to move. In that case, you’ll use Fire Blast.

With multiple enemies around, you’ll actually want to start off with Flamestrike to apply the damage-over-time effect to all enemies. After that, line up a well-placed Cone of Cold to hit as many enemies as possible. After that, use Arcane Explosion until Flamestrike needs refreshing!

If you’re playing a pure arcane build, your rotation is fairly simple too. You’ll now use Fire Blast first and on cooldown so that you can keep your Ignite talent DoT applied. After that, you’ll use Arcane Missiles whenever Fire Blast is on cooldown. In the event you’re fighting multiple enemies, you’ll want to start with Flamestrike to apply the DoT. After that, just spam Arcane Explosion!