When it comes to raw DPS you can’t go wrong with a Shaman at all.  While they can’t ever reach the heights of ranged damage that the Hunter, or even the Warlock can dole out, Shaman can still contend.  Like the Balance Druid, the Elemental Shaman’s main contribution is versatility and utility.  While the focus here is to maximize your efficacy with magical damage, it’s important to remember that you have other spells and abilities too.  They can heal of course, but they can also remove diseases and poisons with ease, especially at this level.  They also have the Purge ability, which is in the Elemental Combat group of abilities and is incredibly useful in PvP.

Shamans in general are also just a lot of fun to play.  With all of their many and disparate abilities, they can do a lot and go a lot of places, which is important as you are leveling your Twink up.  With Ancestral Call, they get a free second Hearth, which will allow you to get around easier.  Shaman can also use a shield, which, coupled with their healing powers makes them extremely survivable.

If being a diverse, useful and varied caster that can as easily support an ally in need, as completely devastate a foe, than an Elemental Shaman is the Twink for you.

This is actually one of the easiest, simplest and totally agonizing aspects of making a Twink Shaman in WoW at just about any level.  There are four races that can play a Shaman and their all Horde races.  This makes the choice of which race to choose so much easier, because you’ve only got three choices, right?  Well here’s the kicker:  All three choices are absolute ringers for playing any kind of Shaman, though some of them fit an enhancement Shaman better.

There are about as many Professions to choose from as there are classes and knowing which ones are going to be good for your character can be difficult.  Fortunately your choice of first Profession is almost made for you, as Engineering is an absolute necessity for Twinking.  Engineering is also one of the most fun professions to endeavor upon, not only because of all of the interesting gadgets, bombs and doodads that will give you a serious edge in PvP, but also the neat pets and toys that can be made from it as well.

As important as Engineering is for those wishing to build a decent Twink of any level, your second choice of Profession is almost as important.  Which professions you’ll want for a second will mostly depend on your class.  Tailoring, for example is almost completely useless to a Shaman, because even though many of the BiS items on this list are cloth armor, most are not and none of them can be crafted with Tailoring.

The real beauty of Professions at this level is that they can all be maxed completely to Artisan.  This means, should you so choose, you can provide yourself with the absolute best that any Profession has to offer.

Here are each profession that would be useful to a level 39 Twink Elemental Shaman, in order of usefulness and a short explanation of why.

Twinking, and really PvP in general, at any level, simply requires you to take this Profession.  The  Major Recombobulator counters the obnoxious effects of Polymorph and restores your health.  You can use the Alarm-O-Bot, to spot any stealthed enemy before they can get the drop on you. Bombs are a really important craftable for PvP, because of the stun duration they off and the Dark Iron Bomb, is the best bomb with the longest duration.  For some elemental protection, the Gyrofreeze Ice Reflector, the Hyper-Radiant Flame Reflector and the Ultra-Flash Shadow Reflector, (big surprise) reflect magical damage for a short period.  These items in particular can quickly devastate any casters targeting you.  If you want to ruin some other caster’s day,  Arcane Bomb, does a radius of mana absorption that it converts into partial damage to all targets.

If you’re trying to Twink on Hard Mode by not having any financial backing, then Enchanting is the second option for you.  Not only can you enchant all of your own gear as you level, making that process a lot easier, but you can convert all of your unwanted greens and blues into useful, and valuable materials to do so.  You can also provide yourself with all of the BiS enchantments, which was not possible for Twinking until this tier and is absolutely invaluable.

Alchemy can be both useful and profitable, as long as you can supply your Twink with all of the necessary reagents for it.  This can be a reciprocal relationship as well at this level, as you can max out Alchemy to Artisan as of level 35.  What this means is that your Main can provide all of the materials, while your Twink makes what they need and can use for their level, but can also make health potions and other consumables that your Main can use as well.  Being able to provide your Twink with all of the many potions and elixirs that they can use at this level is also a huge relief, as they can be quite expensive to simply purchase.

Another use for for Alchemy, Leatherworking and Tailoring is to sell the various high level components and transmutes that only these Professions can craft.  Alchemists can transmute metals with recipes like Recipe: Transmute Arcanite, Leatherworkers can craft the Cured Rugged Hide and Tailors can use Pattern: Mooncloth to purify Felcloth.

The Shaman has quite a few potent and unique abilities that give them an edge in and out of PvP.  They have a solution to almost every problem and can often solve problems for the whole group that other classes can only do for themselves.  The three groups that Shaman abilities and spells break down into are:  Elemental Combat (Ranged DPS), Enhancement (Melee, Support and Tanking) and Restoration (Healing).

Here’s a short list of each of the groups and the spells within them that are of note to an Elemental Shaman.

An Elemental DPS Shaman is going to draw all of their talents from the Elemental Talent Tree.  This is a role that focuses on lowering Mana cost and maximizing the damage of all elemental spells.  Here’s a look at the Elemental Talent progressions for you to get a sense of the role build. 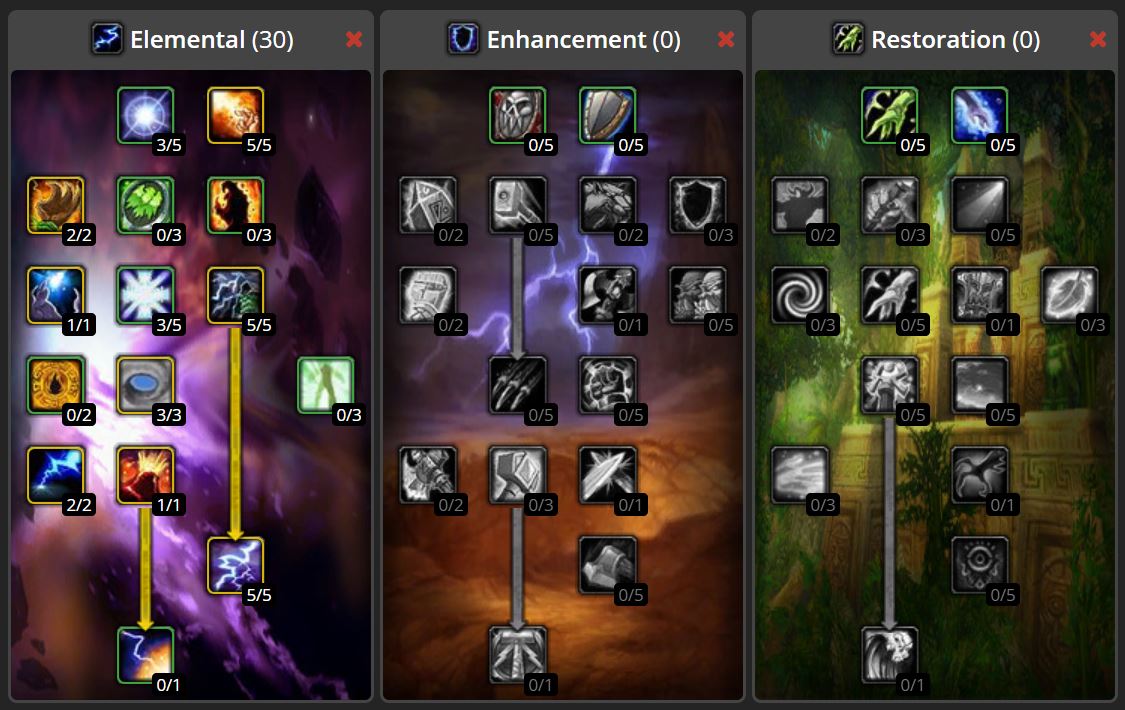 You might also like to try your hand at creating your own build?  If so, check out the Talent Calculator and see what you can come up with.

Getting your BiS gear is pretty much the biggest part of building one.  It’s also the biggest pain in the butt, ass the gear is often difficult to acquire, but that’s the point of playing a Twink, right?  If you wanted something easy, you’d never leave the starting zones.  The following is a list of all of your BiS gear and where you can get it.  Good luck!

Sometimes this aspect of the gear can be even more important than the gear itself for Twinking.  The Spellpower  weapon enchant  for instance offers 30 points of damage to any magic damage you do, which is more than any single piece of gear can provide at this level.  This is why you’re going to want to make sure you get all of these that you can, because they only make whatever gear you are wearing, more powerful.

This aspect of Twinking might be the most tedious, but it is also very beneficial to your performance.  There are quite a few extremely useful consumables in the game and while they might be expensive to acquire, or even create, they are worth it.  Also, none of them are particularly hard to come by as their usually available on the AH.  Make sure you get as many of these useful items as you can.

Don’t forget that you can’t use more than one Guardian and one Battle Elixir at the same time.

Shamans like the buffs that all classes can provide, even Paladins, although that’s never going to happen in Classic.   Arcane Intellect increases intellect, which increases your critical strike with spells and mana pool.  Power Word: Fortitude increases your Stamina, which in turn increases your health.  If there is a Druid around, make sure you get Mark of the Wild, as it is probably the most beneficial buff for a Shaman, but also because Druids and Shamans working together is literally all of the forces of the natural world, which is awesome.

And so, you have all of the knowledge you need to create the perfect level 39 Twink Elemental Shaman.  Go now, into the battlegrounds of Azeroth to summon fire, frost and lightning!  They called down the Thunder, so it’s time for you to make em’ reap the Whirlwind!   Have fun!

I had this twink on Light’s Hope server. A lot of a work and a lot of fun. I miss this toon.

Yea 39 is the place to be for shammy. I leveled mine to 49 a couple months ago for elemental mastery…and big mistake. 39 ghost wolf is BIS when no one else has mounts. Wsg just control mid and kite allies away from mid/tunnels…soo fun and easy