Welcome to our rogue leveling guide for WoW Classic! When it comes to deception and mastering the shadows, there simply isn’t a better class than the rogue. Through the use of energy and combo points, rogues effectively string together attacks for a fluid and rewarding gameplay experience. If you enjoy fast-paced, up-in-your-face action, then you’ll love playing a rogue!

One downside of leveling a rogue is that the class is quite squishy, wearing only leather armor to defend from attacks. To counteract this, you’ll need to effectively use your utility spells and crowd control to flip situations into your advantage. Rogues absolutely have the ability to be one of the best classes in the game, but they require dedication and effort to master. There’s no denying that playing a rogue is extremely rewarding, making all the early struggles worth the hassle.

Rogues are the ultimate skirmisher when it comes to leveling, but you’ll need to understand how you can always start fights with the upper hand. In this guide we’ll cover everything you’ll need to know about leveling a rogue! That includes your talent build path, rotation, relevant abilities to train, and useful gameplay tips. Leveling may be a little slow to start, but once you start unlocking more talents and learning the rest of your toolkit, you’ll quickly grow to love the sneaky rogue class.

Reaching level 60 is quite the journey, and it will definitely take you days of in-game time to finally get there. With more than 100 hours to slog through, you can take some comfort knowing that the adventure is absolutely worth it. Even better, you can definitely feel each gear or weapon upgrade you acquire. There’s nothing more rewarding than watching your dedication and effort result in an improved and more powerful character. Rush if you must, but don’t forget that the magic is in the journey itself.

Take note of these tips for leveling:

Playing as a rogue is fairly simple, but your rotation might slightly change depending on if you’re using daggers or swords. To start off with, you’ll want to have Deadly Poison on your main-hand weapon and Instant Poison on your off-hand weapon. Every fight should be initiated via Stealth, so you can launch with a powerful opener. Use Riposte anytime it is available.

Sword rogues will open with Garrote, while dagger rogues will definitely want to use Ambush. At this point, you should have just one combo point, which you’ll use to cast Slice and Dice. Until level 42, you’ll skip this step because it isn’t worth it until Slice and Dice is rank 2. The rest of the fight is simple combo point generation and finishing with Eviscerate.

If you’re a sword rogue, you’ll default to using Sinister Strike to generate combo points, while dagger rogues will do the same unless they have the opportunity to be behind a target so they can use Backstab. Once you have 5 combo points, spend them on Eviscerate. 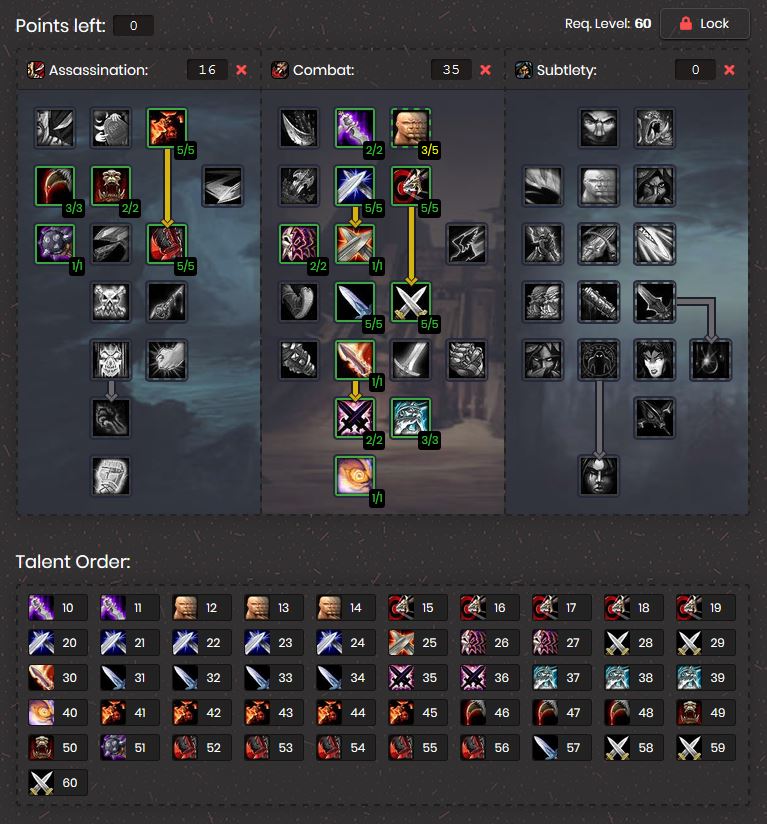 This build gives you a nice mixture of offensive talents, defensive talents, and talents that help you generate combo points. All specializations are viable for leveling, but combat provides the most consistent damage output. Up until level 30, it doesn’t really matter that you use a specific weapon type, but this is when you’ll need to put points into either Dagger Specialization or Sword Specialization. After level 50, you’ll have no issue generating combo points and your rotation should feel much more fluid.

You’ll also want to spend some time leveling up professions. This will take away from you actively killing enemies and completing quests, but it fulfills your need for a way to make gold. How fast you move is crucial to determining how long it takes for you to level. The quickest way to impact this is with a mount, which is quite expensive. Professions will allow you to fund a mount, or alternatively you can use them for an extra edge in combat. Pick whichever professions suit your playstyle better.

Rogues will find the greatest use from these professions: