Tankadin Guide – Playing as a Protection Paladin in WoW Classic

This guide is written to help players that want to try tanking as a Protection Paladin in World of Warcraft Classic. Note that there are a few things to keep in mind as this is not an easy role to fill:

While we don’t have a traditional Taunt ability, there are a couple of ways to monitor and regain aggro: 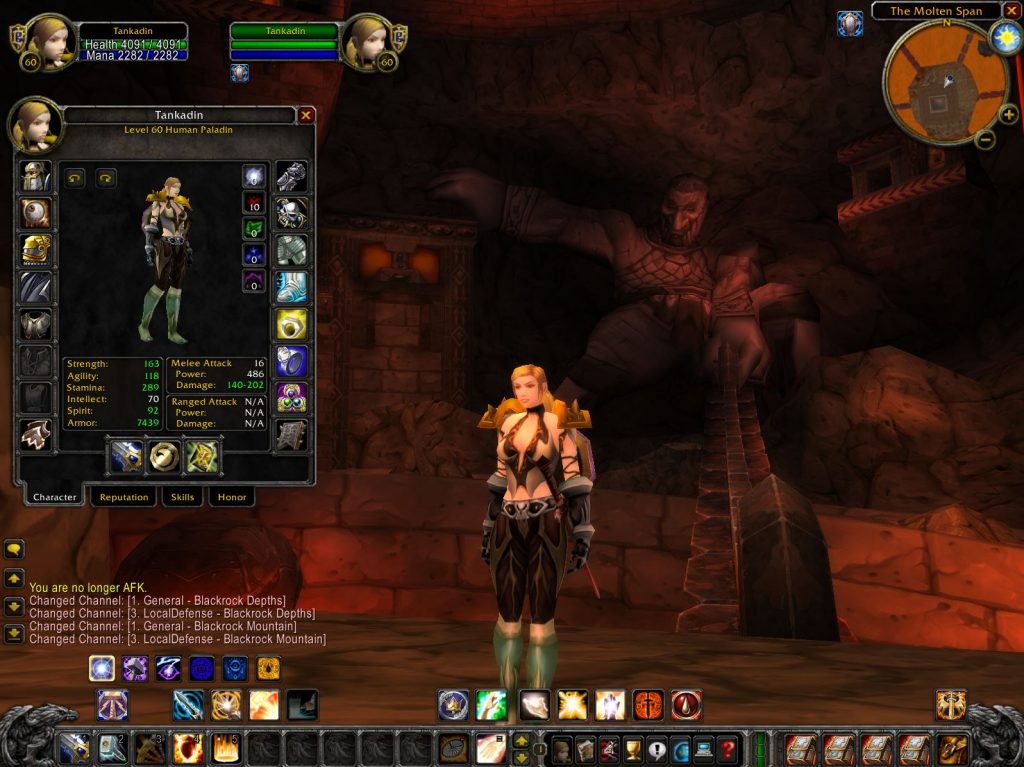 If you are tanking you want this up at all times, DO NOT forget to use this before a boss fight or whenever you are just sitting not doing anything and have the mana. With Improved Righteous Fury, this causes your Holy spells to cause 90% additional threat. It is imperative to have this up at all times when tanking.

This is the standard seal used when tanking inside dungeons. It provides threat on each successful melee attack, while if the boss or target dodges, parries or your attack just misses, your Seal of Righteousness won’t generate any threat.

Seal of Wisdom and its corresponding Judgement effect are nearly mandatory for the longer fights when we’re tanking them. This is mainly used in raids since our threat does not come from Seal of Righteousness in raids.

Consecration is one of the few reasons Paladins are easier to play when it comes to AoE tanking. It does have a hefty mana cost, coming in at 565 for Rank 5, but the threat it puts out is well worth the cost. (Sitting at 0 spell damage, it works out to be 91.2 threat per second) It should be mentioned that it is possible to downrank your spells if you are running low on mana, as any threat is better than none.

Holy Shield increases our chance to block by 30% for a maximum of 4 blocks for a duration of 10 seconds. Holy Shield has a threat modifier of 20%, so at Rank 3, Holy Shield causes roughly 296.4 threat per block. (Holy Shield‘s damage is 130, multiplied by 1.20, totaling 156, and because it’s Holy spell damage, Righteous Fury increases that threat by 90% for a grand total of 296.4)

Blessing of Sanctuary causes you to take up to 24 less damage from all sources (Physical and Magical) while also causing 35 Holy Damage on every successful block. Combined with Holy Shield, this is a great tool for threat generation, causing 66.5 threat per block.

More often than not, Retribution Aura will be the go-to aura for Protection Paladins since it provides 38 passive threat on all attacks that hit us (including partial blocks, too) If your healer(s) is/are having a tough time keeping you alive, you can use Devotion Aura for a very slight reduction in physical damage taken. If you’re tanking a caster mob, both Retribution and Devotion Aura are useless and you should change to a resistance aura.

This allows you to “bubble” a party or raid member, forcing any physical-attacking mob to focus on the second person on their threat table (Hopefully, that’s you!) Keep in mind that this does NOT include casters, they will still fire away at your target since they’re not protected from magical damage.

This is one of the Paladin’s best traits. Simply by spending 15 mana, we can eliminate any debuffs in the game (With the exception of Forbearance, of course) With the help of a macro, we can use this and still maintain aggro over the target by casting it, and then immediately cancelling the effect: 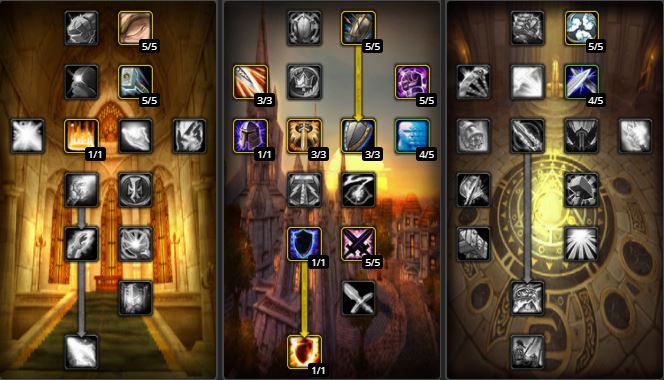 The reality of the situation is that One-Handed Weapon Specialization is pretty well useless for us since our melee damage is never relied on for threat. Reckoning is beneficial in raiding content since we’ll be relying on mana regeneration to allow us to generate threat and extra swings (Especially with Flurry Axe) are always a welcome sight with Seal and Judgement of Wisdom. If necessary, you can move one point from Precision into Anticipation for an added 0.32% overall avoidance.

Also I am going to put a list of consumables you NEED to use to even be good raiding. If you raid without these you will be bad. I am warning you.

The EXTREME MINIMUM amount you will need. I will list more you can use after this list.

Added consumables you can use. You don’t need all of these for a majority of the content, use them to push the limits of your tanking ability.

You can also set your Hearthstone to Goldshire and ask for a Summon to go retrieve a Darkmoon Faire Buff from Sayge. (2 Hour Cooldown).

Also consider getting an Electromagnetic Gigaflux Reactivator, which you can use for the buff then switch back to your tank helm. (Reflective shield that deals 5 damage whenever you are attacked). (Drops in Gnomeregan and is easily solo farmed).

This guide was originally posted by Cysthen on the WoW One forums and has been preserved here.

Yeah, I agree. So much wrong information. First of all the defense cap you want to aim for is 390, which is the crush cap. Secondly reaching that without sacrificing too many important stats like sp and int, which in turn would diminish your threat and endurance in fights. Paladin is super weirdly talented so getting crit sometimes is actually helpful, because Redoubt + Holy Shield ramps up your avoidance with 60% block chance for 10 seconds.

Divine Strength vs Divine Intellect – Well, each to their own but I’d rather have more Int than Str for Boss fights. GBoK is your best threat generator in raid bosses because it’s mana-efficient compared to all other greater blessings, so you really need that talent. So a bigger mana pool and mana regen helps there alot. Fast weapon like Flurry Axe, which has a great chance-on-hit effect, helps your mp5 ridiculously and thus helps you generate more aggro with GBoK.

I’d advise to look from Holyfrog, he has pretty valuable information about Paladin tanking skill rotation, pre-raid gear and video footage about the boss fights.

Correcting my error. 390 defense is not the crush cap. In boss fights, you should prioritize for higher defense, but you should also aim for the maximum avoidance 102,4 % (dodge, parry & block combined). So higher defense increases the avoidance.

As I’m sure you are now aware, Defence is different than Crush Immunity. Reaching a certain amount of defence will not make you immune to crushing blows. Reaching the defence cap (Which is 440 in Classic/Vanilla) will eliminate the chance of you receiving a critical strike (200% of normal damage) Reaching the crush cap (102.4% – a combined value of your Block, Dodge, Parry, AND Miss) eliminates the chance of you receiving crushing blows (150% of normal damage) which is definitely not an easy task to accomplish.

Unlike Warriors, one of our best bets for mitigation (Redoubt) relies on us receiving a critical strike, so Paladins should never focus on reaching 440 defence. Using defence for the added mitigation grants you 0.16% total avoidance per point of defence.

Obtaining “Blessing of Kings” is entirely dependent on what you are doing; raiding or just running dungeons since using this method in a dungeon won’t generate enough threat. However, in a raiding situation, yes, it’s recommended you pick this up. It all just depends on what you are doing in-game. “Flurry Axe” is a great weapon for tanking, absolutely.

In a raiding environment, you’re not really relying on your spell damage, since 97% of your threat comes from spamming the heck out of “Greater Blessing of Kings.” In dungeons, however, it’s always beneficial to have spell damage gear.

Lol. Except the part on consumables, this is so wrong.