Welcome to our WoW Classic guide for restoration druids! Druids are the most versatile class in the entire game, using their shapeshifting ability to harness the powers of whatever role they so desire. Druids have the ability to deal damage either up close in Cat Form or with spells from afar in Moonkin Form. They can also switch to Bear Form and serve as a tank, or stay in their traditional humanoid form to heal with the restoration talent tree.

While druids can be anything they want, their best role in a raiding environment is undoubtedly using the restorative power of nature to heal and restore their allies. In this guide we’ll cover all you need to know about playing a restoration druid! We’ll start with the two race options and then cover the best talent tree builds to use. After that, we’ll explain everything that goes into optimizing your restoration druid! From stat priorities to enchants, we’ll cover it all! To finish things off, we’ll give you a rundown of how you should play in a raiding environment!

Druids are a fairly restrictive class, only being available to the two races that are closely in tune with nature. Both the alliance and horde have one option when it comes to race. Alliance players can choose a night elf, while horde players can play as a tauren. Both races are fairly identical in terms of power, considering neither offer any racial bonuses that benefit a restoration druid. If you want to see what both races offer, check it out here!

When it comes to picking your talents, restoration druids have a bit of flexibility. Your build will ultimately depend on your healing role within your raid. If you’re focused on tank healing (or just starting out as a healer), you’ll definitely want to use a deep restoration Swiftmend build. If you’re assigned to raid healing, a hybrid balance build focusing on reducing mana costs is a better option. 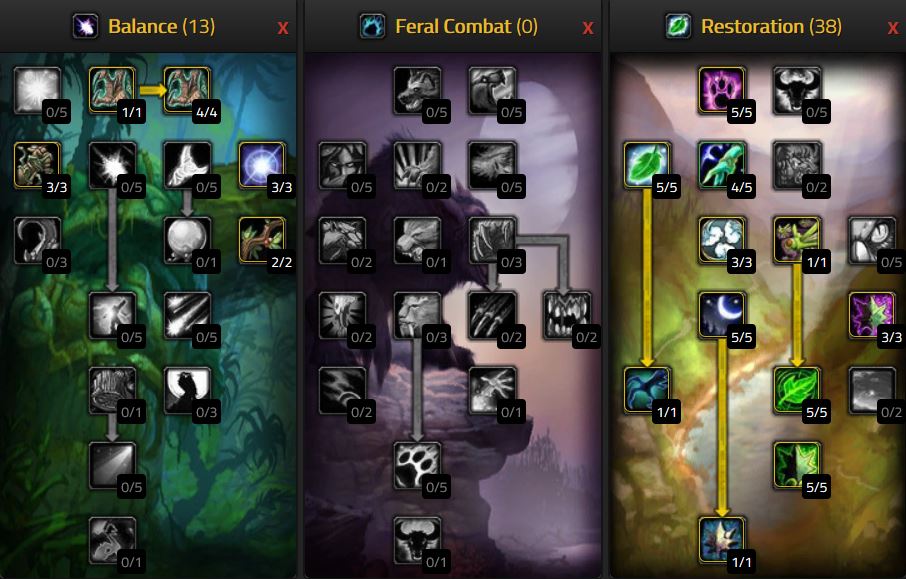 This deep restoration build is fantastic for just about any setting. The only time you’ll really struggle is if you are the only healer assigned to raid healing. Fortunately, that doesn’t happen often, so you can’t go wrong with a 13/0/38 build. This picks up the most important ability, Swiftmend, which will consume a heal-over-time effect you have on a target to instantly heal them for the amount of a full-duration Rejuvenation or Regrowth. Not only that, but you have 3 points in Improved Rejuvenation for an extra 15% effectiveness on one of your easiest heals. 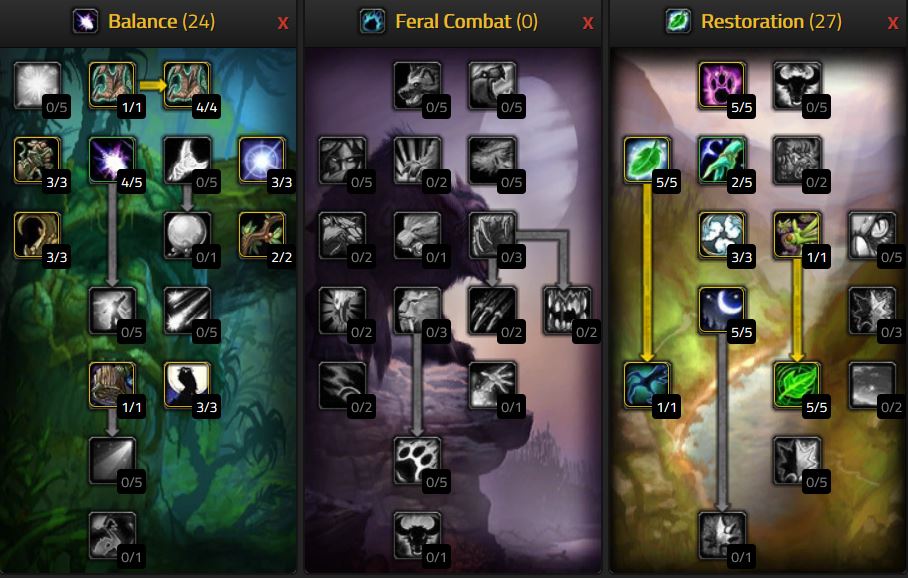 In the event that you are assigned to raid healing, you’ll have an easier time if you choose to drop Swiftmend altogether. This build focuses on the balance talents Nature’s Grace, which reduces spell casting time by 0.5 seconds following a spell critical strike, and Moonglow, which lowers the mana cost of Healing Touch, Regrowth, and Rejuvenation. This allows you to cast more heals overall, while also casting them quicker if you manage to crit. You’ll mainly use Healing Touch and Rejuvenation with this build.

Restoration druids have several helpful stats available to them, but a few are more valuable than others. The theorycrafting behind stat priorities for any healer also applies to a restoration druid. Your primary focus is to boost the power of your heals, but you’ll also want plenty of mana and regeneration to allow you to keep pumping out those heals.

With that in mind, prioritize these stats for a restoration druid:

One thing that often gets overlooked for any class is the use of professions. While professions may not always a direct offensive bonus, they offer several ways of making money and providing indirect benefits. For example, some consumables are made through professions, but they can be traded. Taking the profession needed to craft consumables doesn’t give you a leg up on anyone, but it does give you better access to them. This makes you much more likely to take advantage of them.

You’ll want these professions for a restoration druid:

Enchants are definitely one of the most important parts of optimizing. As a restoration druid, you can enchant 9 pieces of equipment that will result in a substantial increase to your overall healing power. Considering healing power is your most important stat, the bonuses you get from enchants are well worth their expensive price tag!

Pick up these enchants for your restoration druid:

Restoration druids will want all of these consumables:

Restoration druids are some of the best healers in the game, thanks to powerful heal-over-time effects and useful direct heals. While druids serve best as a tank healer, they’re also great at keeping raids alive by applying Rejuvenation to raid members in danger. How you end up playing will ultimately depend on your role as a healer, but there are still important concepts to know that apply to either role!

Here are some gameplay tips for a restoration druid:

When it comes to healing as a restoration druid, your rotation will ultimately depend on whether you need to focus on the tank or the whole raid. You follow less of a rotation in both situations, but instead choose your spells based on what is most effective for each particular scenario.

If you’re assigned as a tank healer, you’ll primarily want to use a rank 3 Healing Touch as your primarily healing spell. It has a 0.5 second quicker cast than rank 4 and is extremely mana efficient. If tank damage is a little heavy, you can also keep a max rank Rejuvenation applied at all times. Don’t refresh it until it falls off.

You can also use a cast of rank 3 Regrowth to apply the heal-over-time effect. You won’t want to spam this because it is quite mana-costly. After casting it once, go back to using rank 3 (or 4) Healing Touch.

If tank damage is extremely high, immediately cast Swiftmend, followed by rank 5 Regrowth until you feel comfortable enough to throw a Rejuvenation up. After that, you can go back to using rank 3 of Healing Touch until Regrowth is required again or Rejuvenation falls off.

Raid healing is a little different, especially considering that you won’t have the Swiftmend ability. As a raid healer, your job now is instead to keep everyone alive rather than just one person. If raid damage is fairly low, you can probably get away with casting just rank 11 Rejuvenation on individual targets taking damage.

If damage output is more intense, you can use rank 3 Regrowth on targets to heal a little bit immediately while also applying your heal-over-time. If raid damage is really intense, you can use procs from the Nature’s Grace talent to help you cast a high rank of Healing Touch on the most dire raid member, switching back to rank 3 Healing Touch on other targets to preserve your mana.