Welcome to our frost mage guide for WoW Classic! Mages are talented spellcasters that can use the powers of frost, fire, or even arcane to blast away their enemies. The frost specialization is the most popular choice for raiding, thanks to a simple rotation and good damage output. While excelling as a mage isn’t that difficult, understanding how to set your character up properly is crucial to maximizing your output.

This includes deciding on a race, your talent choices, and all aspects of optimization. In this guide we’ll cover your stat priorities, professions, enchants, and the best consumables you can use. We’ll also cover the best rotation to use and what your role is as a ranged damage dealer.

Both the alliance and horde can play as a mage, each having two race options to choose from. All four race options make for a good mage, but there are clear favorites for both faction. Check out your preferred faction below, or take a look at all the racial abilities here!

When it comes to choosing your talents, there are actually two distinct frost builds. One is a 31/0/20 arcane frost build focused on damage, while the other is a 17/0/34 deep frost build that focuses on utility. This means that your talent choices ultimately depend on your role within your raid, so use these as starting points to give you something to work with. 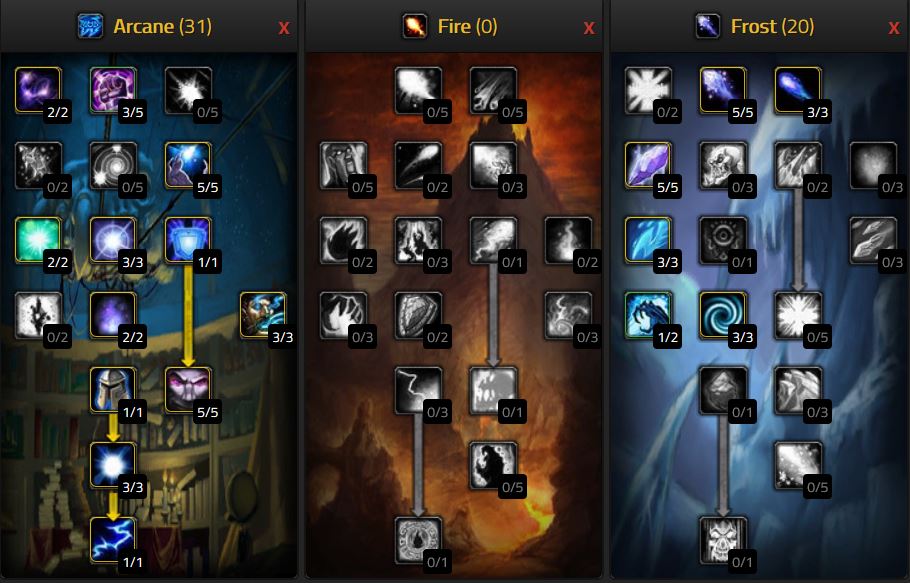 While this build does have 31 points in the arcane tree, it is still designed for frost. It doesn’t have the defense cooldowns found deep in the frost tree, but it does take all the important offensive cooldowns  you can find in the arcane tree. This includes Presence of Mind for an instant spell cast with a 3 minute cooldown, and Arcane Power, which grants 30% more damage for 15 seconds at the cost of 30% more mana. 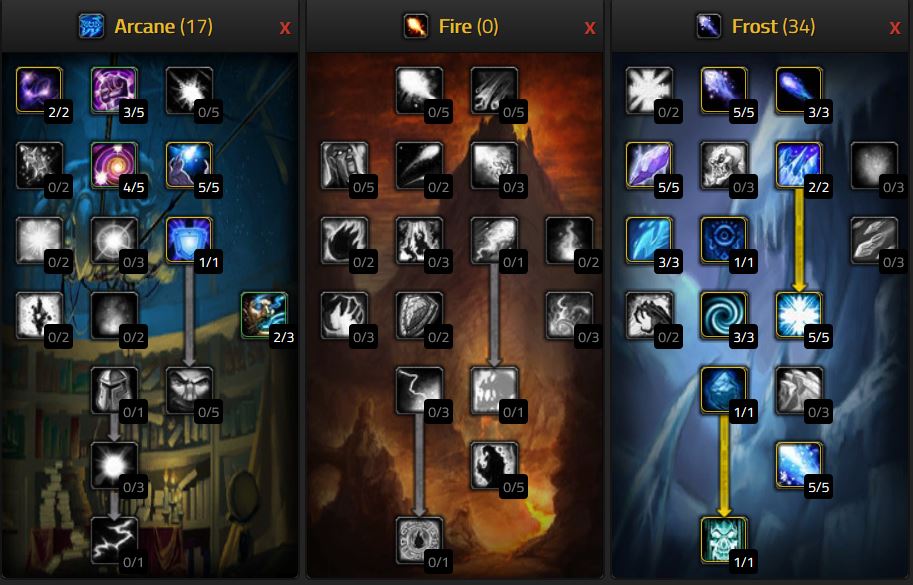 While the deep frost build lacks the offensive punch of the arcane frost build, it does offer some fantastic utility. This build offers access to the talent Winter’s Chill, which with 5 points gives a stacking crit chance for frost spells up to 10% at max stacks. This build is mainly used to amplify the damage of other mages in your raid using the arcane frost build, meaning you’ll only need one in your entire raid group.

While you might think all mages are the same, the amount of damage you depends on how you choose to optimize. Proper optimization is the difference between being an average damage dealer and a chart-topper. After reaching level 60, your next goal should be acquiring optimized gear to help you get into dungeons and raids.

Seeing as mages are pure damage dealers, all of your stat priorities are centered around stats that boost your damage output. This includes both raw damage with spell power, but also longevity through added mana and regeneration. As with any damage-dealing class, you’ll also need to achieve a specific hit chance.

Here are your stat priorities as a frost mage:

The professions you decide to level are also an important aspect of optimizing your character. Mages are a class that benefit from picking up specific professions, although you can still benefit from just about any. Without professions, you’re missing an essential way of making money and granting yourself useful advantages to help set you apart from other mages.

These are the best professions to have as a frost mage:

One of the most important aspects of optimizing is the enchants you choose to use. You’ll gain a significant amount of damage from enchants alone, but they are often quite expensive. Don’t be afraid to use weaker versions of listed enchants (if available) until you have gear you know you’ll be keeping for a while.

These enchants are essential for a frost mage:

Another thing you’ll need to remember is consumables. As a mage, you don’t need as many as other classes do, but there are still a core few that will help you out. Most consumables focus around boosting spell damage, but don’t shy away from any that give you mana regeneration as well.

You won’t want to go without these consumables as a frost mage:

Raiding as a frost mage is exceptionally easy, regardless of whether you use an arcane frost or a deep frost talent build. Not only are mages easy to play, but they reliably output good damage without needing specific gear.

Here are some important tips to playing as a mage:

The actual rotation for a frost mage is quite simple. Regardless of your build, for single target fights you will only cast Frostbolt. If you need to move and can’t cast, you can use Fire Blast or Cone of Cold for instant damage. For multiple targets, you’ll cast Flamestrike, follow it up with a Cone of Cold, and then proceed to spam Arcane Explosion. Simple, yet effective!

If I'm not working or spending time with the family I'm probably gaming. Some of my favorite recent games I've played are Far Cry 5, World of Warcraft Classic, and 7 Days to Die.
Subscribe
2 Comments
Most Voted
Newest Oldest
Inline Feedbacks
View all comments

a few questions:
1. how do I know I get 10% hit from the gear – there is no such stat indicated?
2. how do I correctly compare gear when leveling? what is the stat calculator? Is +20spd better than +20 int on an item etc.?
Thanks

you need to download an addon to tell, or just count the hit