A priest leveling guide for World of Warcraft Classic. Weigh the pros and cons of which race to choose, find tips on the best talents to use while leveling, and review the best spell rotation.

Full credits for this guide go to /u/PriestLightsHope.

Desperate Prayer up to Rank 6

Hands down the best PvE race specific spell, since it completely negates fear during encounters making a lot of early game bosses a joke. 2 dwarf priests per raid are enough to keep up fear ward indefinitely.

Desperate Prayer up to Rank 6

Reduces ranged damage taken by 95 and increases dodge chance by 10 % for 15 sec. Good for leveling purposes & 5 man dungeons while leveling, that’s about it i think.

Rains starshards on targets head, causing 756 damage over 6 sec. Pretty mana intensive & a channeled cast making it not all that great during leveling

Weakens the target enemy, reducing damage caused by 20 & the effectiveness of healing by 20%.

When the caster is the target of a melee, ranged or spell attack the enemy gets struck for 116 shadow damage. Pretty good OH SHIT button while leveling/farming.

The next melee attack on the caster hits the enemy for 64 shadow damage and reduces damage caused by 20. Leveling trait.

Afflicts the target with a disease causing 904 shadow damage over 24 sec. Leveling trait.

It’s pretty much agreed upon in the community that dwarf is the best priest race if you are looking at PVE encounter performance, which is simply because fear ward is too good to pass upon.

However: I personally definitely prefer the Human racials over dwarf, since only 2x Priests in the raid have to be dwarf in order to negate fear effects on the MT & 10% Reputation gain on a purely selfish level is almost too good to pass up on because of the various rep grinds that happen during a raid cycle. The 5 % bonus spirit is nice to have as well.

Purely speaking PvE encounters i feel like the Berserking trait from Trolls is – albeit situational – too good to not go for it(especially in 5 mans). It is a lot less cut and dry compared to the alliance situation though. Please note that most fears get out-ranged by healers and ranged classes in general.

Last but not least, you have to play whatever you actually like playing. There is no point stressing about min maxing your character to its fullest potential if you don’t enjoy playing that way. There are always plenty of guilds who will take a non dwarf Priest for alliance for example & i don’t think your race matters much on Horde side.

These are the talents you should use up to level 40.

Notes: Get 5/5 Wand Specialization directly after Spirit Tap and focus on shadow afterwards. 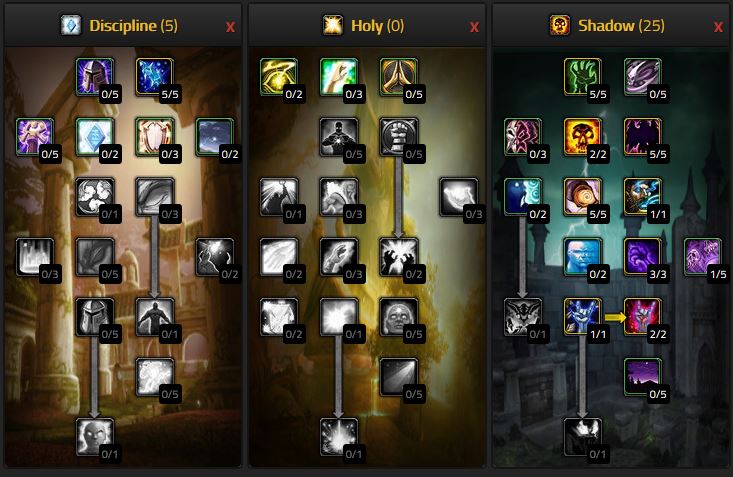 These are the talents you should use at level 40 and higher. 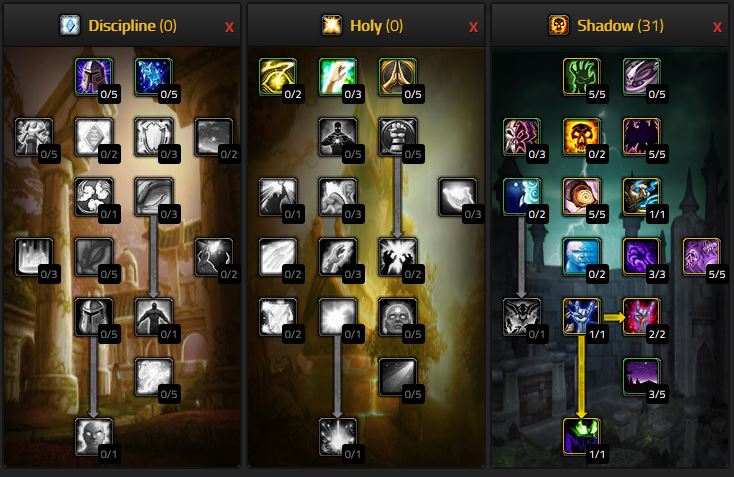 To make a long story short, you want to be able to keep fighting with the least amount of downtime possible in order to maximize your leveling speed(since you’ll never be a pew pew mage). In order to achieve that I found it to be the most efficient to go with the following basic rotation: