Alchemy is one of several crafting professions you can choose within WoW Classic! It concerns the creation of potions and elixirs, which will provide you offensive and defensive bonuses to aid in your gameplay. Alchemy requires the use of herbs, which can be found and gathered with the Herbalism profession in zones all across Azeroth. The higher level herbs used, the stronger the resulting potion will be.

Potions and elixirs created through alchemy provide benefits for players of all types. They’re good for giving your low-level character a slight edge while leveling, but they also become fairly important at higher levels when players run through dungeons and raids.

Besides offering bonuses to help your character, because the potions and elixirs you’ll make are tradeable, it also becomes a fairly profitable profession, especially when paired with herbalism as your second profession. 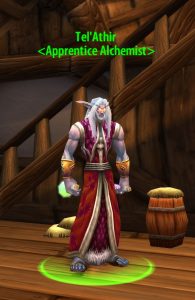 Profession trainers in WoW Classic are different than Retail WoW, in the sense that some trainers can only train you up to a certain proficiency level. Here’s where you can locate an alchemy trainer for your skill level:

In WoW Classic, advancing to the next proficiency of a profession requires you to reach a certain level on your character. For non-gathering professions like Alchemy, you’ll need to be level 10 to learn Journeyman Alchemy, level 20 to learn Expert, and level 35 to learn Artisan Alchemy techniques.

On top of requiring herbs to create potions, you’ll occasionally need materials from other gathering professions to create potions. Those aren’t required to reach 300 in Alchemy, so we’ll avoid any recipes that require items other than herbs. All potions do require the use of a vial, but those can be found at a vendor directly next to any Alchemy trainer.

We’ll break it up every 75 level into their own portion below, but here’s the approximate number of what herbs you’ll need for your complete journey of 1-300 Alchemy:

For your first potion, you’ll want to make roughly 60 minor healing potions, using all your peacebloom and silverleaf to get to level 60. Make sure you don’t sell any of them, as you’ll need them to make the next potion! After this, make sure to learn Journeyman Alchemy to increase your level cap to 150.

You’ll make your second potion for quite a few levels as well. Use the minor healing potions you made to get this far in combination with briarthorn to create lesser healing potions. You can sell or save these for personal use, as you won’t need them again.

This is the same potion you made to get from 60-75. Continue mixing it until you level 110.

You’ll want to make 30 healing potions to get you to level 140. At this point, you should head to Darnassus if you’re Alliance, or Undercity if you’re Horde, to learn expert Alchemy, boosting your level cap to 225.

This is the first non-healing potion you’ll make! Craft 10 (or 15 if you’re reading ahead) lesser mana potions to reach the halfway mark to 300.

You’ll want to make 5 more lesser mana potions to bring your level to 155 so you can craft the next potion on this list.

Now you’ll finally create your first long-lasting elixir! You’ll want to craft 25 elixirs of agility to reach 210 in Alchemy. If you play a rogue or hunter, you should keep these to help you do extra damage, or consider selling them on the auction house if you play another class.

After finishing up your agility elixirs, you’ll now want to create a few elixirs focused on providing some physical defense. You’ll want to craft 5 elixirs of greater defense to stretch your Alchemy level to 215. If you haven’t done so after making elixirs of agility, head to Feathermoon Stronghold in Feralas if you’re Alliance, or Stonard in Swamp of Sorrows if you’re Horde, to learn Artisan Alchemy, and allowing you to reach the final cap of 300.

To finish off the last 10 levels before reaching Artisan Alchemy, make 10 superior healing potions. You’ll make another 5 in the next step, so you can save a step and just craft 15 if you’re so inclined.

Craft 5 more superior healing potions, the same recipe you made to get from 215-225. You’ll want to reach 230 Alchemy so you can make the next elixir on this list.

While this potion isn’t terribly useful, it’s good for gaining you 20 good skill levels during the final stretch to reach 300. Craft 20 elixirs of detect undead so you can reach 250 Alchemy.

Your combat elixirs are becoming quite powerful now, with the elixir of greater agility being no different. You can increase your agility for 25 for an hour, requiring level 38 to use. This makes them excellent for lower leveled characters and twinks. Craft 15 elixirs of greater agility so you can reach the next milestone of 265 Alchemy.

Once you reach 265 Alchemy, potions become more expensive to craft. You’ll want to make 40 superior mana potions to reach 285 Alchemy, but each potion requires two Sungrass and Blindweed each! Once you finish though, you’re just one batch of potions away from 300..

You’re now in the final stretch, needing just 15 more skill ups to reach 300 Alchemy! You’ll want to create major healing potions now, but they’ll become yellow around 295 Alchemy. You still need to make them even though they’re a yellow recipe, which means you might not get a skill up every level. It might take you only 15 potions to reach 300 if you’re lucky, but bank on needing to make at least 20.

Congratulations, you’re now a master Alchemist! Enjoy your new capped crafting profession, and use it create useful elixirs for yourself and your friends! Or use it turn a nice profit when paired with herbalism, eliminating any need to purchase herbs for your recipes.

Once you’ve maxed out your alchemy skill, you’ll probably want to take advantage of one of the greatest benefits: flask crafting. Unfortunately, there is an added requirement to the creation of flasks unlike other alchemy recipes. If you want to craft a flask, you’ll need to do it directly at an alchemy lab!

There are only two alchemy labs in the game. There is one in Scholomance, but there is also another in Blackwing Lair. Both of these alchemy labs will require you to form a group so you can kill the enemies guarding one, but this is often a weekly event that raiding guilds will schedule so flasks can be created for the entire raid group.

If you are going on a trip to Scholomance or Blackwing Lair, make sure you bring all the materials necessary for crafting your flasks with you! If you don’t have them in your inventory, you’ll just have wasted a trip as you can’t craft them!

Thank you. I’ll take it that she won’t teach any potion skills as well until you trained with her at 225. I was trying to learn Mana Potion, which you can learn from her and it does not requires lvl 225, but it was not an option at all with her.

Apologies this has been corrected!

under elixir of greater agility, u mention that its a 15 agility combat pot that requires lvl 27 but thats the lower version, its actually 25 agility and lvl 38 to use 🙂

Got that updated, thank you!