Tailoring is quite a useful skill within WoW Classic. Not only can tailors craft cloth armor, but they can also create bags for players to hold additional items. This makes tailoring an excellent skill for making money too. Check out the rest of the guide to learn how to raise your tailoring level from 1-300!

Unlike most other crafting professions, there is not a gathering skill associated with tailoring. Instead, you’ll use cloth found on humanoids all across Azeroth. Better quality cloth drops from higher level humanoids. You can use our cloth farming guide to help gather materials for all levels.

Tailoring is fairly useful, not only because of the bags, but also because they can create powerful cloth armor. Some of the best armor in the game is made through crafting, and without a maxed tailoring level, you won’t be able to learn the recipes! And who can forget the beloved runecloth bag, the best bag you’ll have until you get really lucky! Many enjoy tailoring because it doesn’t require a gathering profession. That’s true, but you’ll still have to kill a bunch of humanoids to collect the cloth! 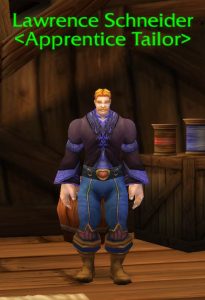 The easiest way to level your tailoring is by starting in one of your faction’s major cities. For Alliance, Stormwind is recommended for less traveling later on, while Undercity is more advantageous for Horde players. Here’s where you can learn each stage of tailoring:

There are many dyes and threads you’ll need to train your tailoring, but they’re all easily purchased at a tailoring vendor next to your trainer. They do add up, but they shouldn’t cost a significantly noticeable amount.

Cloth drops from humanoids anywhere in the world. More likely than not, you’ll need more runecloth than anything else. Arguably the best location to farm for runecloth is in Silithus. Use our cloth farming guide for help.

When you leave to go train in artisan level tailoring, bring all the cloth you’ll need to reach 300! The last thing you’d want to do is realize you need to buy more or visit a bank when you’re already in the middle of a zone! 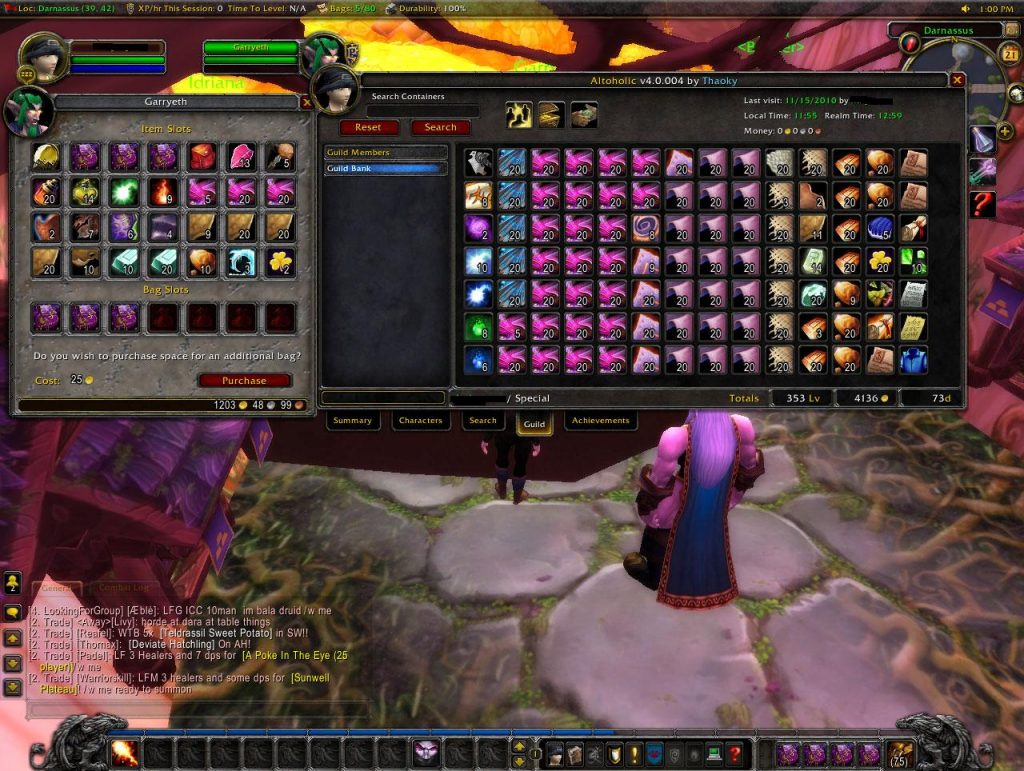 These are roughly the number of materials you’ll need to level from 1-300 in tailoring. Some figures may vary slightly based on how lucky (or unlucky) you are on skill ups. For simplicity’s sake, bolts aren’t included in this total because you’ll make them with the cloth listed here, but you can see bolt totals under each segment of leveling. Don’t forget that you can buy threads and dyes at tailoring vendors! Here’s what you’ll need:

The very first recipe you’ll make for a little while. You’ll want to make a total of 80 bolts, but you’ll stop gaining levels after 50 tailoring. Make sure you keep all of them as you’ll need them for future patterns!

For your first piece of armor, make 10 heavy linen gloves to bring you to 60 tailoring. Don’t forget to buy coarse thread from a tailoring vendor!

For the next few levels, you’ll need to make some colorful shirts! Don’t fret, because red dye is red-dye-ly available at a tailoring vendor near you!

With all the coarse thread these capes use, you really start to wonder where it all goes! You’ll need a total of 30 coarse thread to make 10 reinforced linen capes. Don’t forget to learn journeyman tailoring from a trainer!

It is now time to switch to a new cloth – wool! You’ll want to make a total of 60 bolts, but you’ll stop skilling up after tailoring level 105.

For your next few levels, you’re going to turn those bolts of wool into some fancy shirts! Make a total of 5 gray woolen shirts so you’re high enough level to make the next pattern. Gray dye is also sold by tailoring vendors.

Up next on the agenda are some shoulder pads! You’ll want to make a total of 15 of these. Consider selling these on the auction house as they’re often sought after as one of the lowest level shoulders available.

You’ve finally made it through all the itchy wool recipes. Now you can switch to something softer, like silk! You’ll be making silk bolts for quite a while. Sit back and make a total of 190 for upcoming patterns.

These colorful blue bad boys are another popular piece of armor. They’re one of the earlier hoods available to wear (besides engineering goggles). You’ll only need 5 to reach 150, but you’ll make another 10 to reach 160. So feel free to make 15, but don’t forget to learn expert tailoring to raise your skill cap to 225! For Alliance players, this means training in Stormwind, while Horde players must head to Undercity!

Continuing where you left off, make 10 more azure silk hoods until you’re at 160 tailoring so you can make some headbands!

Now you’re going to switch up your hat style to a headband! Make an even 10 of these so you reach 170 tailoring.

Be careful with this next recipe, because it calls for bleach! Don’t worry, it won’t actually hurt you, but you will need to purchase it from a tailoring vendor. Make 5 of these formal shirts to hit 175 to unlock mageweave cloth recipes.

Great work so far, you’ve now made it to the penultimate type of cloth! This is the last type you’ll work with before using runecloth. You’ll need to make a total of 100 bolts so you’re ready for armor recipes coming up. You won’t use them for a little bit, but make sure you hold on to them!

These vibrant red vests are all the rage amongst Azeroth fashionistas! That’s great news for you, because you’ll need to make 20 of them. You’ll know you’re are the right spot when just 95 skill level separate you from being capped!

Woohoo, look at those pantaloons! They aren’t just pants, they’re pantaloons! Now that you’re excitement is gone, make 10 of these pantaloons so you’re ready for the next pattern on this guide.

For the next 5 skill levels, you finally get a choice! You’ll use those mageweave bolts you saved from a little while ago, but both the vest and leggings have the same material cost. Because of that, you can really make either one of them to reach 220 tailoring.

For this step you can also make Orange Mageweave Shirt which requires 1x Bolt of Mageweave, 1x Orange Dye, and 1x Heavy Silken.Thread.

Now that you’re 220 tailoring, you’ll want to seek out the artisan tailoring trainer suited for your faction. For Alliance players, that’s Timothy Worthington in Dustwallow Marsh. For Horde players, go to Hillsbrad Foothills to find Daryl Stack. Make 5 black mageweave gloves to reach 225, or make a total of 10 because you’ll make them until 230.

Look familiar? Just make another 5 of these so you’re ready for the final mageweave pattern.

This is the last time you’ll deal with that filthy mageweave! Just kidding, mageweave is somehow always clean, it must be magic! You’ll need to make at least 20 shoulder pieces to hit 250 tailoring, the milestone required to start making runecloth recipes.

Great job making it here so far! Take a deep breath, because you’ve still got a little ways to go. The good news is that you’re almost to runecloth bags, the biggest bags that can be made! Make a total of 180 runecloth bolts so you’re ready to finish this journey off.

Now that you just made all of those lovely runecloth bolts, turn them into belts! 15 will do the trick, as long as you’re at 275 tailoring.

Ah yes, the real reason to level tailoring! 14 slot bags are the biggest bags that can be crafted. 16 slot bags are only found through rare drops, so the market for 14 slot bags is huge! Unfortunately, they do require rugged leather. Whether you collect it yourself or buy it, use it to craft 5 runecloth bags.

This recipe can only be purchased from the vendor Qia in Winterspring or on the Auction House (at a premium) if the vendor is sold out.

You’re now on the final tailoring pattern you’ll need to reach 300! These tough gloves also require rugged leather. Once you have enough for it, make a total of 20 runecloth gloves to reach the coveted 300 skill level mark. Congratulations on your new level 300 tailoring skill! Have fun making bags and robes!

Here are all of the vendors offering endgame tailoring patterns. Most of them do come with a reputation requirement, meaning you’ll need to farm that out before you can even learn to craft each recipe.

don’t make red linnen shirts. make blue, they are worth 75 copper instead of the 25 copper for the red ones and cost just as much to make

Actually don’t make either of the shirts, just make the reinforced linen capes from 60 to 75. They are 67c to vendor, and the 3 threads cost just 30c, while thread + dye is 60c for a shirt + the money saved by not buying those recepies.

love the guide m8! Fun and informal 🙂 keep it up

I notice this for all the guides you have, that I’ve used. Money is hard to come by, in Classic. You should go for recipes the players can make some money off, or at least not loose too much. There are some recipes in between that, with a good price on AH, you can earn money on, and probably will want to do until it’s grey, and then some. The only one I remember from the top of my head is in leatherworking (Hillman’s shoulders, which you can make 5-6s per item, buying from AH and vendoring when you’ve made them) There are sure to be some of them in tailoring too.

Just go to Alterac and Buy the pattern for Azure Silk cloak, It is cheaper than Crimson Silk Pantaloons and everything before that! (horde anyway)

That’s true, the Azure Silk Cloak in question IS cheaper, but it doesn’t allow the player to increase their skill as far as the Pantaloons do. The Pants turn gray at 235 and the cloak does at 225. So, for the purposes of leveling the skill quickly.

Having said that, if you’re a horde player and want to grab it and use it up to 225 that’s also a good option!

Ty for your crafting guide, i’m an idiot

why doesn’t any of profession guide include the fact that you have to reach a specific level before you can level up your profession like how isn’t that a MUCH NEEDED FACT!!!

You must be level 5 to obtain Primary Professions.

You must be level 10 to train Journeyman level – You can reach 150 skill.

You must be level 35 to train Artisan level – You can then reach 300 skill.