In the Arena, Paladins are one of the most potent classes to solo with.  They probably have the highest level of survivability, as they are the only class in the game that can wear mail armor and heal at this level.  They also have access to devastating damage dealing with their Retribution abilities.  In a groups setting, Paladins often find a warm welcome, not only for their ability to heal, but for their adaptability.  They can tank, they can heal and they can deal damage with the best of them.  While not as versatile as the Druid, or even the Shaman (who can choose to deal damage from a distance), the Paladin excels at whatever role they choose to fill.

Paladins only have two choices of race and can only be played on the Alliance faction.  Horde players, or those with Horde mains, may wish to either level an Alliance character before trying to Twink a Paladin, or check out the Shaman class.  If you’re not quite sure about races in general, check out the Races page here for a more generalized, lore aspect to the denizens of Azeroth.  Following, is a short description of the racial traits that are useful in PvP, which are also available to both Alliance races that can play Paladins.

While Engineering is a necessity, your other Profession is also important.  Which ones you’ll be interested in will largely depend on your class.

What follows is a description of each of the Professions that should be of interest to a level 39 Twink Paladin and why.

The Major Recombobulator is especially useful for countering the Crowd Control (CC) effects of Polymorph.  Other items of note are the   Alarm-O-Bot, which can help in detecting Rogues and Druids and the Dark Iron Bomb, which is the absolute best bomb in early Classic WoW, with the most damage and longest CC duration.  There are also three energy reflectors; Gyrofreeze Ice Reflector, Hyper-Radiant Flame Reflector and Ultra-Flash Shadow Reflector, which all reflect their type of damage for 5 seconds.  This is extremely useful and can quickly turn the tables on any caster in the game.  Finally, there is the Arcane Bomb, which absorbs mana and does half of what is absorbed as damage to anyone in range.

All of these items are incredibly useful in PvP and are the best engineering has to offer at this level.  Not to mention all of the fun fireworks and pet companions you can make.

Enchanting is probably the best choice for players who are not supporting their Twink with another character.  It has few expensive reagents that must be truly gathered, most being products of disenchanting items you are already likely to pick up.  It also offers lucrative selling opportunities with the many materials you will acquire from breaking down all of the Green and Blue items you do not need.  It can also offset the cost of getting your own enchantments some, as higher level enchanters are sometimes on the lookout for lower level materials.

This might not be a bad choice if you can level it quickly and get some decent low level leveling gear, but only if you are also funded by a miner.

The truth is that other than the above professions, no others are at all viable for a Paladin.  Tailoring, Leatherworking,  and Skinning should all simply be avoided, because none of them are of any use to someone wearing mail at this level.  Herbalism  would only be useful in Alchemy were your first choice of Profession, but since you’re going to take Engineering, avoid Herbalism as well.

That being said, you might think about picking up Alchemy, Leatherworking and Tailoring simply to sell the high level components and transmutes that only these Professions can provide.  Alchemists can transmute metals with recipes like Recipe: Transmute Arcanite, Leatherworkers can craft the Cured Rugged Hide and Tailors can use Pattern: Mooncloth to purify Felcloth.

First Aid:  The only thing to worry about here is to get your First Aid maxed as high as it will go, so that you can use the Heavy Runecloth Bandage, which can heal you almost completely full with just one bandage.  To do this, you will need the three books Expert First Aid – Under Wraps, Manual: Heavy Silk Bandage and Manual: Mageweave Bandage.  The only trouble is that, because you still can’t get your Secondary Skills up to 300 yet, you’ll have to find someone to craft the bandages for you.  Alternatively, you could simply purchase them off of the AH.

Fishing:  This skill is not as important at this level bracket, but it’s still a great way to increase your income, especially while you’re bored and waiting around near some water.  Take any opportunity you can to fish, because each time you fish is a chance to catch a rare fish that can earn you some good money.  It’s also not a bad way to get Cooking and Alchemy reagents to increase those skills.

Paladin abilities, like so many other classes abilities, break down into three basic groups.  These groups are Holy, Retribution and Protection, and they correlate to their different talent trees as well.  At level 39, some of the Paladin’s abilities are quite potent, and whether you are attacking enemies, protecting allies, or healing them, you are going to notice that you’re pretty good at whatever you choose to do.

The following is a description of all of the abilities available to a Paladin at level 39 and some tips on how to use them best.

Within this bracket, things get a lot more straight-forward for Paladins.  You will choose a role and, more than likely, you will stick with that role.  Make no mistake, there is more than enough room for variation and customization here, but generally, you’ll want to stick with a given role, because you’ll generally be more powerful that way.  That being said, an off-tank/healer can be one of the more effective Hybrid roles, so mess around.Below are some of the more streamlined and popular builds for Paladin Twinks.

This is the standard Holy spec build and is pretty much centered around healing. Healer Paladins are sometimes even more effective in PvP than some of the more popular healing classes, because their ability to where heavier armor and their higher melee damage output make them more likely to survive. 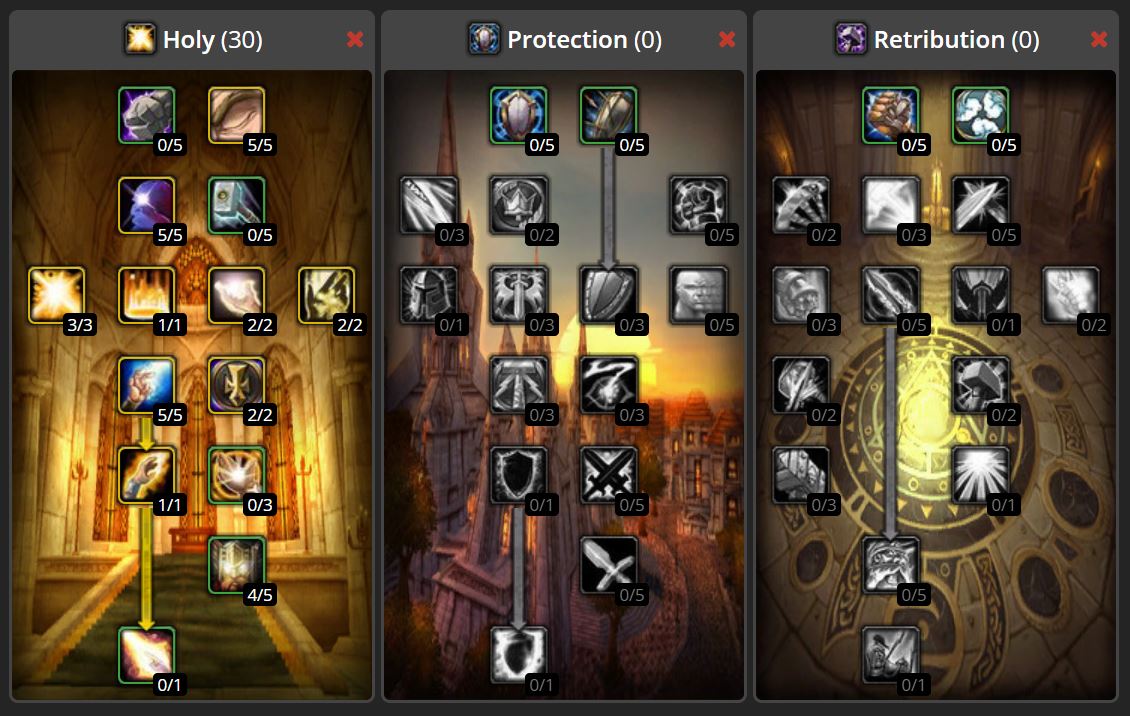 This is also a Holy build, but it strikes a balance between healing and support by adding Blessing of Kings. 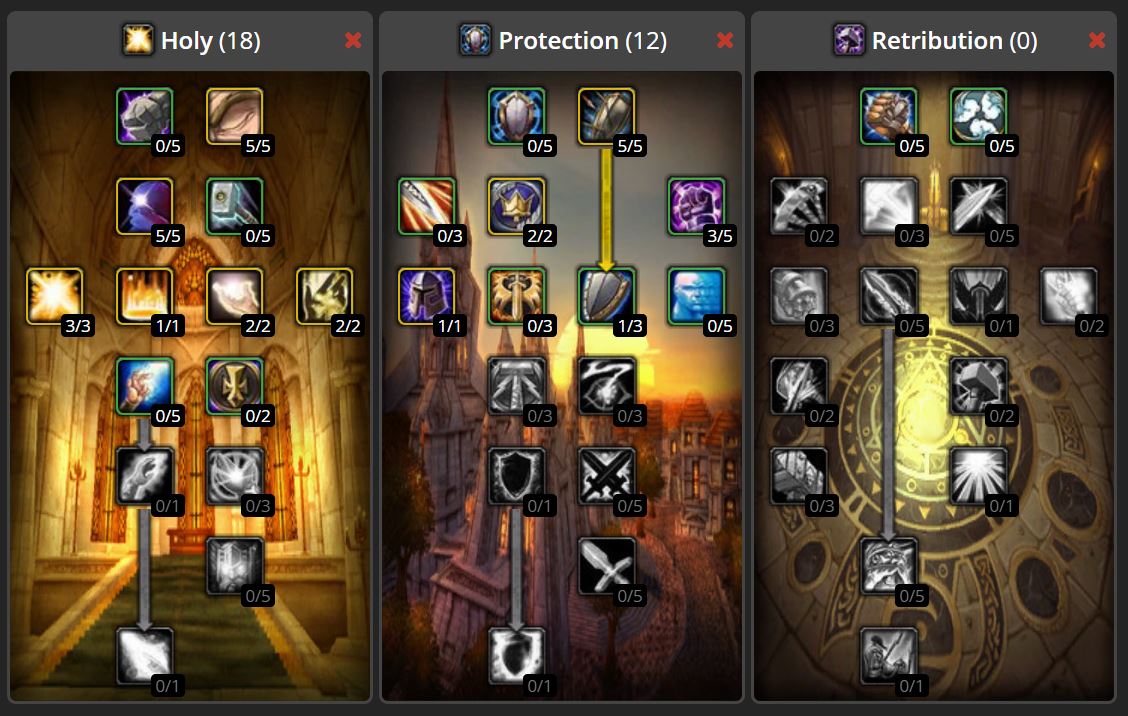 The protection build focuses on defense and support, increasing your armor and your efficacy with a shield, while also improving and adding a number of blessings that help you and your entire party. 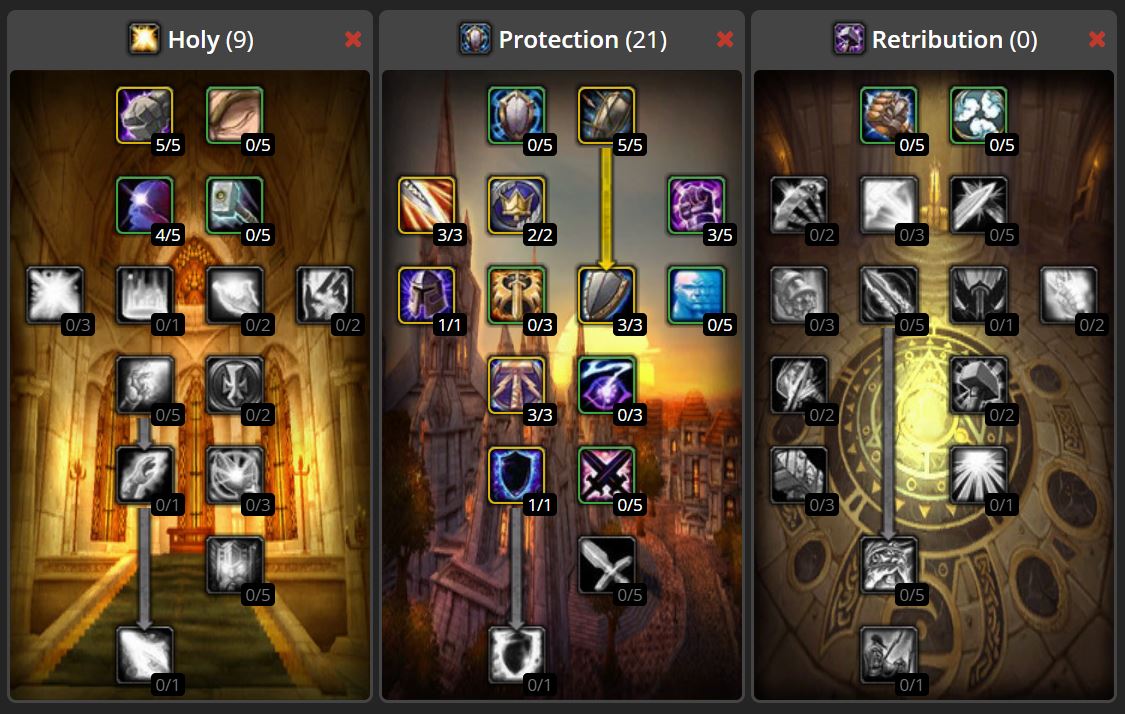 Easily the most popular build for PvP Paladins, the Retribution spec focuses on increasing your ability to do damage with your Seals and Judgement and using two handed weapons. It also offers a slight mobility advantage with Pursuit of Justice. 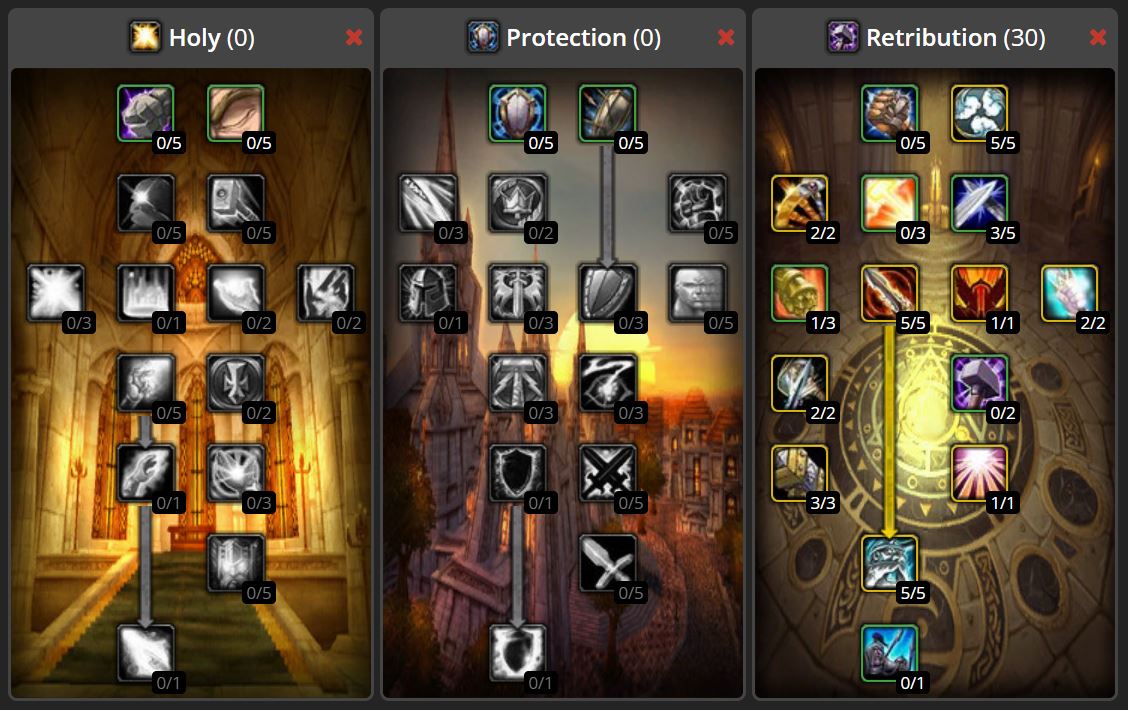 These are again, the most straight forward builds and represent the most popular choices. You might think that you can do better in choosing your talents and you might be right. If you do think so, take a look at the Talent Calculator and see what you come up with. A really fun build might be to focus purely on your melee damage and draw from all three trees. If you do it right, you can wind up with a crit rating that rivals some Rogues. Give it a shot!

Gear is important for all classes and is usually one of the most difficult aspects of building a Twink of any level.  For Paladins, your gear is going to depend somewhat on your spec, but generally you are looking to increase Strength, Stamina and Intellect in that order.  Though, if you are playing a DPS Paladin, you might get a lot of benefit from Agility, as it increases critical strike rating.

Acquiring all of this BiS gear won’t be easy and it is advised that you get financial backing from a Main to get the items from the AH, which will make the task much easier.  Listed below are all of your BiS gear slot items and how, or where to get them. Good Luck!

To help you find the gear you need each the lists below have been separated into Holy, Protection and Retribution.  Just click the button for which spec you are going for, or the one you used most and the guide will show the appropriate gear.

Remember that you can only have one Battle and one Guardian Elixir active at a time.

Use all of them if you are alone, because they are cheap and why not?

Class buffs are also important.  Be sure you get the one that fits what you are doing.  Arcane Intellect if you’re doing a lot of caster damage, or healing and Power Word: Fortitude for everything else.   Mark of the Wild is a fantastic buff as well., and don’t forget about all of your own amazing buffs from the spells and abilities section.

You now know all that you need to create the perfect level 39 Twink Paladin.  Make sure to stick with the gear that works for your chosen role and spec.  Armed with these weapons of righteousness, and endowed with the wisdom of the light, go now and bring ruin to the wicked!  Have fun!

Thanks. For the Twinks!