Welcome to our WoW Classic guide for combat rogues! There are three different rogue specializations, but all focus on dealing damage. Combat rogues are the most common specialization you’ll see around, offering good damage output without requiring significant amounts of critical strike rating. Rogues have several intricacies to learn, but understanding them all makes the class quite rewarding.

In this guide, we’ll cover all of the important elements that go into optimizing a combat rogue. This includes your stat priorities and professions, but also the best enchants and consumables to have for maximum damage. We’ll also cover the best race choices for a combat rogue, along with the best talent builds available. To finish this guide, we’ll cover the best way to use your abilities to make yourself as useful as possible!

When it comes to picking a race, rogues have quite a lot of flexibility. Of the 8 races in the game, only the beefy tauren are unable to play as a rogue. While you can pick any race, there are definitely a few that stand out. If you want to know what every racial ability offers, take a look here! Otherwise look for your favorite faction choice below!

Deciding on your talents for a rogue depends on what weapons you choose to use. Deep within the combat tree, there are talents that offer bonuses if you use fist weapons, maces, daggers, or swords, but the best benefits come from daggers and swords. That means there are two main combat builds, one for daggers and another for swords! 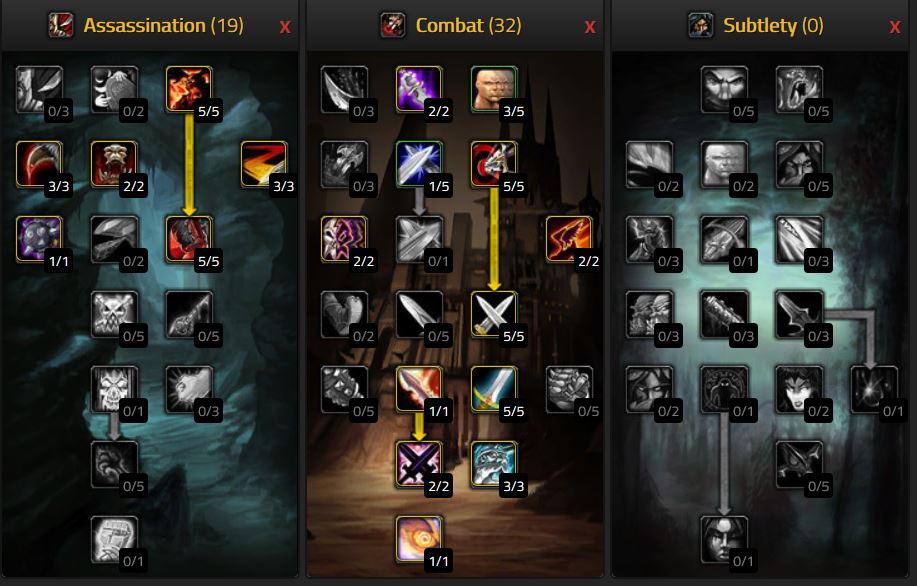 If you plan on using swords, you can’t go wrong with this 19/32/0 build. You’ll notice the most important talent here, Sword Specialization that gives a 5% chance to attack an additional time after you deal damage. You’re also able to pick up Ruthlessness for a 60% chance for finishers to add a combo point. 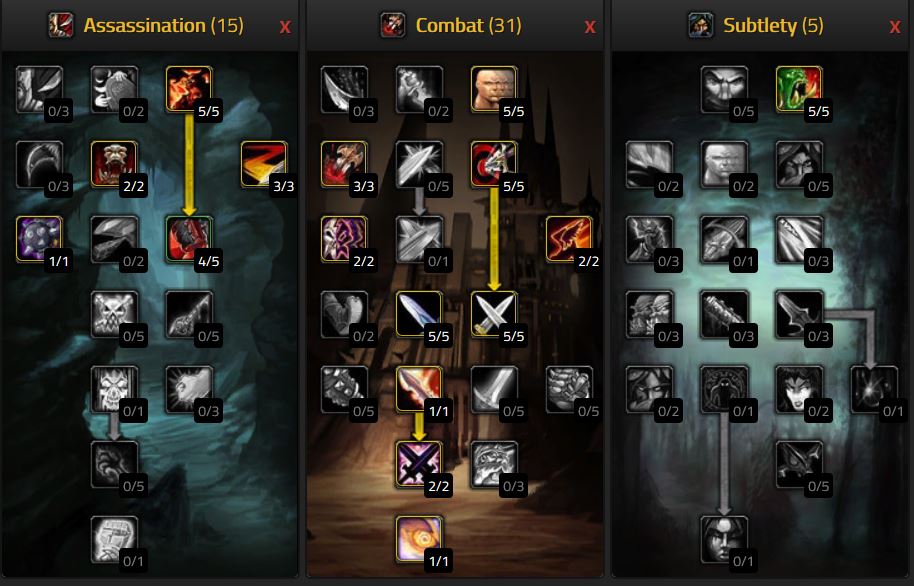 Alternatively, you can use daggers as a combat rogue with this 15/31/5 build. Instead of Sword Specialization, you’ll pick up Dagger Specialization for +5% Critical Strike Chance with daggers. You also need 5 points in Opportunity for +20% damage to Backstab, and 3 points in Improved Backstab for a 30% bonus to critically strike with Backstab.

One of the most important things any player can do for the character is optimize. It is definitely nice just to have strong gear, but you’ll be much better off if you’re careful to choose gear based on stats and make sure to make it stronger with enchants. If you want to do the most damage you can, you’ll need to carefully optimize your character.

To understand how to optimize your character, you’ll need to know what makes your character work. As a melee damage dealer, you benefit greatly from attack power, but you also need to respect the hit rating rules. Unlike assassination rogues, agility and attack power are more important than raw critical strike rating.

This is how you’ll want to prioritize stat values for a combat rogue:

An often overlooked aspect of optimization is your weapon skill. Weapon skill is incredibly important to determining your damage as it will prevent you from dealing glancing blows, which severely cut the damage you deal. If you’re able to go above the usual 300 weapon skill cap, the bonuses continue to stack up, making humans fantastic when using swords.

You’ll also want to level weapon skill because each point gives you:

While rogues don’t require any professions to craft armor, they can still benefit from leveling two of them up. Professions are vital for gathering and crafting, but they can also be used as a source of money generation. Some professions will also directly boost your damage, like engineering, so you’ll need to decide based on what is most important for you.

These are the best professions for a combat rogue:

Enchants are absolutely critical to ensuring that you deal the most damage that you can. There are several useful enchants for a combat rogue, most offering some form of damage boost. These can get fairly expensive, so don’t feel compelled to purchase pricier ones until you have gear optimized for your stat priorities.

Collect these enchants to maximize the potential of a combat rogue:

While rogues do have less consumables than most other classes, they do have some special reagents to collect to cast some of their abilities. You might not think consumables matter as much for a rogue considering that there are fewer, but they can make the difference between a 1% wipe or a kill. If you really want to show your commitment to your raid group, you’ll need to have a healthy supply of consumables every week.

These consumables are mandatory for a combat rogue:

One of the key distinguishing features between assassination and combat rogues is Seal Fate, which combat rogues don’t have. This means that you won’t get extra combo points from critically striking with combo point generators. As a result, combat rogues tend to have a more reliable rotation, but with less finishers.

Check out some useful gameplay tips for a combat rogue here:

Combat rogues do have several abilities available to them, but you’ll just need three of them to successfully deal damage. Rogues use the energy resource to deal damage with combo point generators, then spend those combo points with finishers. It is important to maintain Slice and Dice for added attack speed, but it lasts for 30 seconds with each 5 combo point application, giving you plenty of flexibility.

Whether you use a sword or dagger will change your combo point generator. Sword rogues are focused on auto attacks to proc Sword Specialization and using Sinister Strike to generate combo points. Dagger rogues instead use Backstab, hoping for Ruthlessness procs so you need just 4 Backstabs for each Eviscerate. Both weapon types will finish off with Eviscerate.

If I'm not working or spending time with the family I'm probably gaming. Some of my favorite recent games I've played are Far Cry 5, World of Warcraft Classic, and 7 Days to Die.
Subscribe
3 Comments
Most Voted
Newest Oldest
Inline Feedbacks
View all comments

Hey Folks, i dont´t understand your last sentence at your Gameplay Tips. You write: Dagger rogues(…) hoping for Ruthlessness(…) but i can´t see any Ruthlessness skilled in your recommended 15/31/5 Dagger Rogue Specc? Am i wrong or just blind? game on!

Slice and Dice you must keep it non-stop ON if you dont keep it up you gone lose a lot dps. Remember 60% of your dps is mele.

Remember 60% of your dps is mele attack*. Slice and Dice is most important !!