Welcome to our WoW Classic leveling guide for shamans! Shamans are true elemental masters, harnessing their abilities to shock and strike their enemies down. They represent the horde exclusively, serving as the counterpart of the alliance’s paladin class. No shaman is complete without an arsenal of totems, which they use to either empower themselves and allies or affect monsters directly.

Shaman are often viewed primarily as healers at level 60, but restoration just isn’t an effective way to level. On the other hand, enhancement is actually phenomenal for leveling despite not being a terribly desirable DPS class in raids. With the combination of healing, utility, crowd control, increased movement speed from Ghost Wolf, and versatile damage output, shaman are easily one of the better classes for leveling.

With so many different spells and abilities at your disposal, it can certainly be overwhelming trying to figure out what works best. We’ll explain that thoroughly in this guide, covering gameplay advice, stat priorities, what order you should select your talents, useful professions, and what abilities will help you level faster. You might feel pretty silly until you can use two-handers at level 20, but once you start to flesh out the rest of your abilities, like the iconic Stormstrike, you’ll know what makes a shaman so fun!

Unless you’re trying to speed your way right to max level, you’ll take quite a while to get there. While this might not sound appealing at first, there’s really not a huge need for you to be level 60 to enjoy the game. All aspects of the game are relevant, from dungeons to questing, and you shouldn’t view anything as irrelevant! Azeroth is absolutely a world you’ll want to immerse yourself in, allowing yourself to feel a connection with your character. It might sound cheesy, but you know deep in your heart your grow a special love for your main character.

You can hasten that connection with the use of this advice:

Playing a shaman is no passive task because you’ll need to kite if you want to be most effective. No matter where you fall in your rotation, remember to stay out of melee range until you need to attack so you only receive damage when you actually go in to attack.

Before you even begin to pull, you’ll want to use Lightning Shield. Reapply this whenever it falls off, as it is the most mana efficient spell you have. Prepare for a fight by planting your Earthbind Totem so you can kite. If you have Stormstrike, you’ll definitely want to open with it. Otherwise, put down your Searing Totem (before level 10, you’ll simply skip straight to the next part).

Now you’ll want to use a shock spell. If you’re under level 10, you can use Earth Shock, but after that you want to use Flame Shock. The rest of your fight will generally consist of auto attacks and kiting. 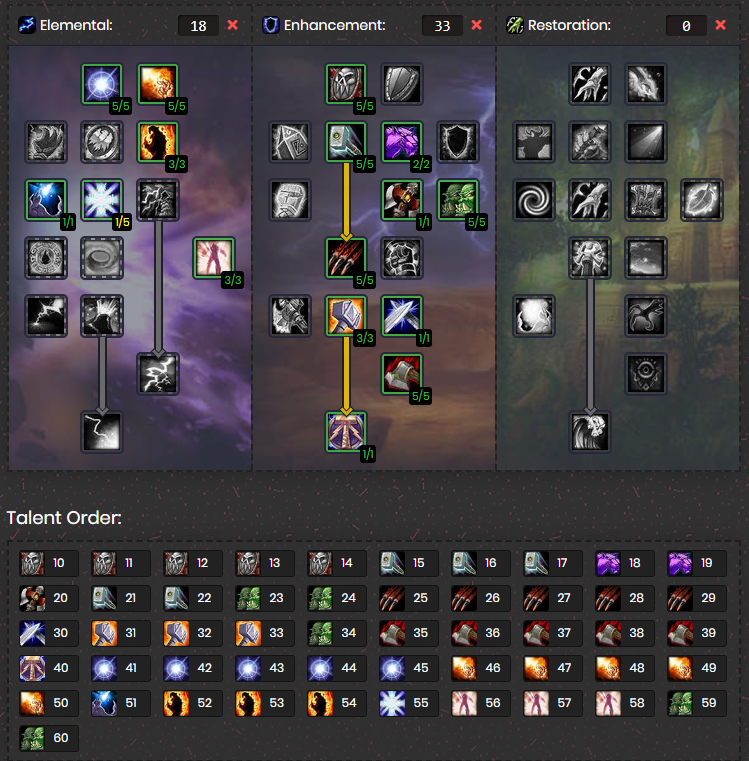 With this build, you’ll have some nice defense with dodging and parrying in addition to boosting your offensive capabilities. Even though the first 20 levels will feel brutal, you’ll want to go enhancement all the way. At this point you’ll unlock Two-Handed Axes and Maces, which is obviously a massive damage increase. Unfortunately your character doesn’t really come together until level 40 when you learn Stormstrike. With Improved Ghost Wolf, you can effectively use Ghost Wolf just about anytime you’re traveling, which makes the road to Stormstrike (and a mount) just that much easier.

Another thing to keep in mind is the use and leveling of professions. Quests will naturally take you all across Azeroth and you’ll inevitably find plenty of metal ore, herbs, and skinnable beasts. Taking the time to collect this means gold for you. With gold you can buy better equipment and a mount, both of which will greatly help you in your leveling journey. Alternatively you can use professions to boost your capabilities in combat!

You’ll be just frost-shocked at how useful these professions are for a shaman:

If I'm not working or spending time with the family I'm probably gaming. Some of my favorite recent games I've played are Far Cry 5, World of Warcraft Classic, and 7 Days to Die.
Subscribe
2 Comments
Most Voted
Newest Oldest
Inline Feedbacks
View all comments

Hey there. Thanks for your input. You’re correct of course, and we’ve fixed the guide to reflect your suggestion. Thanks again for your time and input.